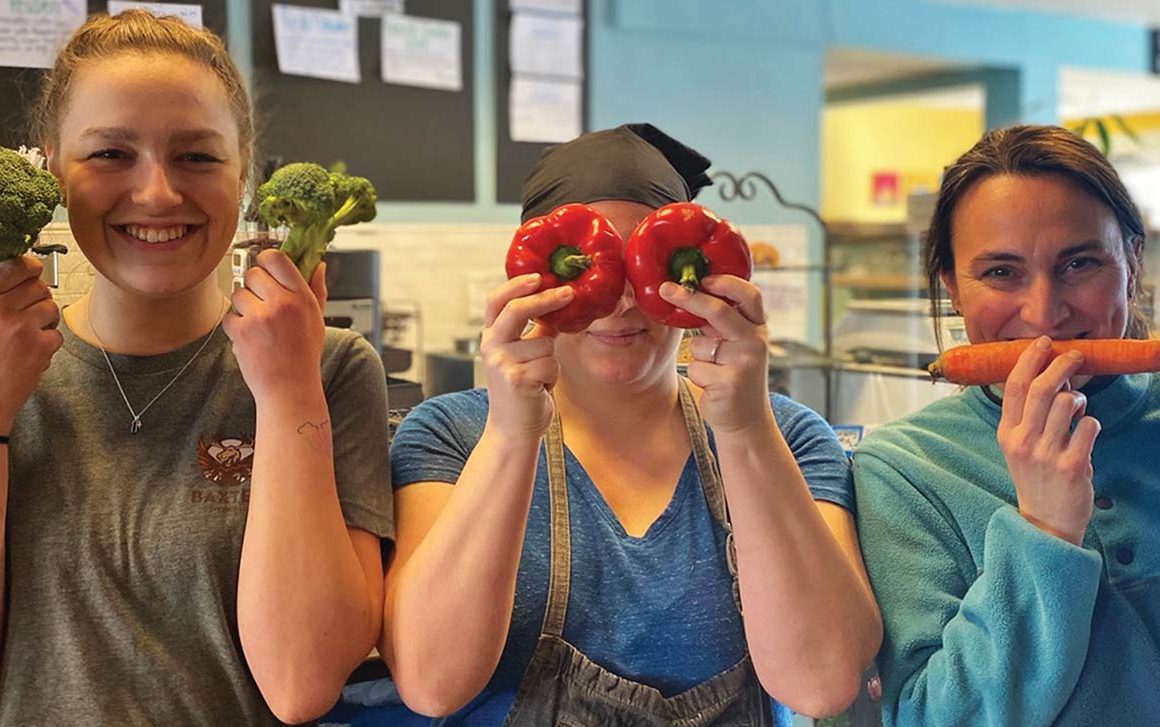 There is something special about the taste of a freshly picked piece of produce from the garden, or beef on the grill from a locally raised, grass fed cow.  Not only the taste, but also the satisfaction one receives from eating locally produced food products is palpable.  Growing up in farm country, having foods, particularly produce, go directly from the garden to the dinner table seemed natural to me.  If some fruit or vegetable did not come from our gardens, surely a neighbor’s farmstand carried it.  Sure, all of our foods weren’t local, and the grocery store was a weekly stop, but having regular access to local foods was common.

In recent decades, we have experienced a revival in the interest among consumers of obtaining foods directly, or indirectly, from local farmers.  For a variety of reasons, including product freshness, nutritional value, supporting local farms and businesses, or knowing how and where one’s food is produced, many consumers are active in finding their food products from local sources.  In the Upper Valley, consumers are privileged with numerous choices for locally grown produce and locally raised meats.  Whether direct from the farm, from one of the many farmers markets, stores that sell local foods such as the Co-op Food Stores, or area restaurants that serve local products, area “foodies” have many options for foods right here in the Upper Valley. 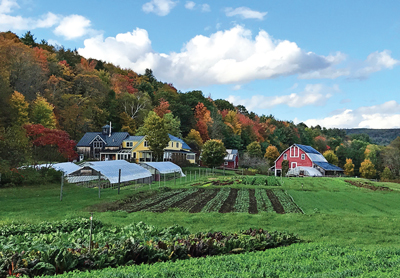 Sunrise Farm, nestled in the hills of Hartland

Chuck Wooster operates Sunrise Farm in Hartford.  During the busy growing and harvesting season from May until October, Wooster says his farm focuses on its CSA (community supported agriculture) customers, who come directly to the farm to pick their CSA shares of the produce.  “We’re lucky enough to sell everything right from the farm,” says Wooster.

During the remainder of the year, the farm also provides produce such as lettuce, chard, kale and spinach to some local restaurants, and to the Upper Valley Food Co-op in White River Junction.

With the strong interest in locally grown, nutritious foods, the Upper Valley is a great place for farmers to get food directly to the customer’s dinner table. “From a farmer’s perspective, we have a lot of people here caring about food, who don’t have extra time to plant a garden,” Wooster says. 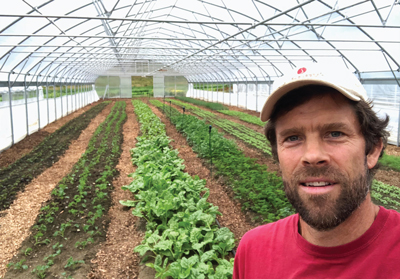 Chuck Wooster in one of Sunrise Farm’s greenhouses

The trend of restaurants using more and more locally grown and raised food products “has been a major change over the last twenty years,” says Wooster.  That trend prompted Sunrise Farm to move forward with winter growing of produce.  “Winter growing is driven by restaurants,” he adds.

Mark Robie, of the Upper Valley’s Robie Farm, markets local meat products to a variety of stores and restaurants.  Having the chance to buy local food products, “gives the consumer a say in how your food is produced,” he says.  Robie often takes calls and has discussions about the meat and other products, such as cheese, sporting the Robie Farm name.  Discussions often center on the health of the animals and the manner in which they’re raised. “These conversations offer consumers a connection with the farmer themselves,” he adds.

Bill Stinson has a history of raising and selling vegetables for 40 years in New England. He notes that the current farm-to-table movement “hasn’t been around all that long.”  Stinson says the late 1970s saw farmers begin expanding their marketing by selling from farmstands and farmers markets. This trend proved advantageous for farmers and consumers. “It connected people with better food, though the movement was slow to grow, to get momentum,” says Stinson. 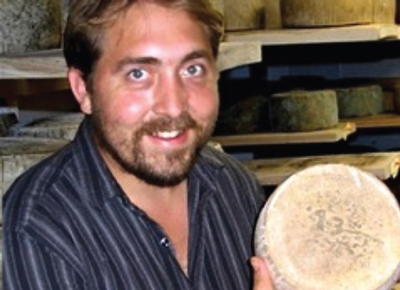 Stinson says that in the early 2000s, chefs and restaurants really picked up interest in using locally grown produce in their creations.  Area restaurants such as Arianas, the Latham House Tavern, and Molly’s all feature Robie Farm meat products, says Robie. Other area restaurants well publicize the fact that they utilize local farm products in their dishes.

The Blue Sparrow Kitchen of Norwich uses a great deal of local produce in the dishes they create, says owner Amber Boland.  In fact, Blue Sparrow’s menu indicates which dishes feature local produce and the farms where that produce originates. “We hear a lot of thanks from folks (for using local produce),” says Boland.  “It means a ton to me.”  Some of the local produce Boland uses in her recipes comes from Edgewater Farm of Plainfield and Sweetland Farm of Norwich. With so much local produce available, Boland says the Upper Valley is blessed for those seeking local food products. “We live in this amazing area with all these farms,” she says. 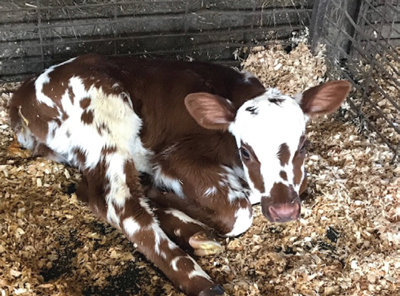 A calf – from Robie Farm

Another area farm producing locally grown and raised food products is Norwich’s Sweetland Farm. Owner Norah Lake says her farm specializes in selling through CSA shares, and at farmers markets. “We’re just on the cusp of getting into the restaurant market,” she adds. With her farm growing over 100 different varieties of produce, the chances of filling the needs of consumers and restaurants is greatly enhanced.  For the consumer, Lake says buying local foods “is a feel-good purchase” which results in supporting local producers and the Upper Valley economy. In return, the farm offers  consumers important information about the food they eat.“ A big part of what we do is education,” Lake says.

Sweetland’s produce does end up in the foods created by nearby Blue Sparrow Kitchen, but for a farmer to make buying arrangements with numerous restaurants or stores, it takes a commitment of time, energy, and resources. In arranging a better, more efficient way to match up the local farmer with the stores and restaurants, enter the Upper Valley’s champion of buying local, Vital Communities.

Last fall, Beth Roy, Vital Communities’ food & farm program manager, says her organization arranged a first ever event designed to match up local farmers with area restaurants, food stores, and grocery distributers. This event, resulting from a grant offered by Vermont’s Agency of Agriculture, allowed local farmers and food producers (such as honey and maple syrup producers) to meet with commercial buyers of their meat, produce, and products. The event resulted “in really positive reactions,” says Roy. “It made it easier for (farmers) to meet these businesses.” 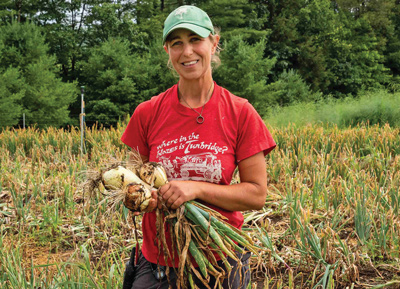 Vital Communities efforts to increase education and realization of the local farm-to-table movement extend well beyond bringing farmers and businesses together. Roy says her organization works closely with area schools to enhance young people’s knowledge and appreciation of nutritious, locally produced foods. Some of these efforts include having schools’ breakfast and lunch programs buy and use foods from local farms and encourage outdoor classrooms where students learn about growing and preparing produce and care for on-site gardens.

Roy says she also works closely with the area farmers markets to enhance the experience for both consumers and the vendors. In this effort, Vital Communities established the Upper Valley Farmers Market Collaborative, working with numerous farm market managers, including those from Lebanon and Norwich, to help grow these markets. Roy notes that both the Norwich and Lebanon markets are particularly successful in bringing together consumers with local farmers and producers.

Some of the ideas coming out of this effort include the Power of Produce Clubs which allows “kids to connect with the farmers market,” says Roy. This program encourages kids to visit the various farmers and vendors at the market, garner information and, in return, receive market dollars to spend at the market on healthy offerings.

Other ways they help the viability of the markets includes assisting vendors in designing customer friendly booths, and encouraging the use of SNAP benefits at the markets, allowing lower income folks the ability to buy fresh, local produce.

Making locally grown food accessible to lower income people should be a key goal, says long-time farmer Bill Stinson.  “Some think it’s only for wealthier folks…it doesn’t reach a large enough volume of people,” Stinson says. Sweetland Farm’s Norah Lake points to programs now in effect that assist lower income consumers to buy subsidized CSAs from farmers and organizations such as Willing Hands which get local produce in the hands of more people, particularly those in need. 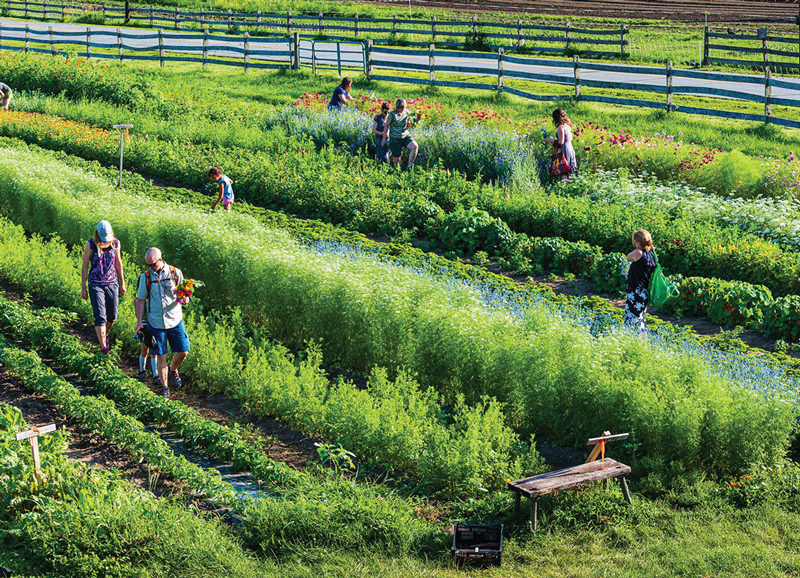