Teens Under the Big Top 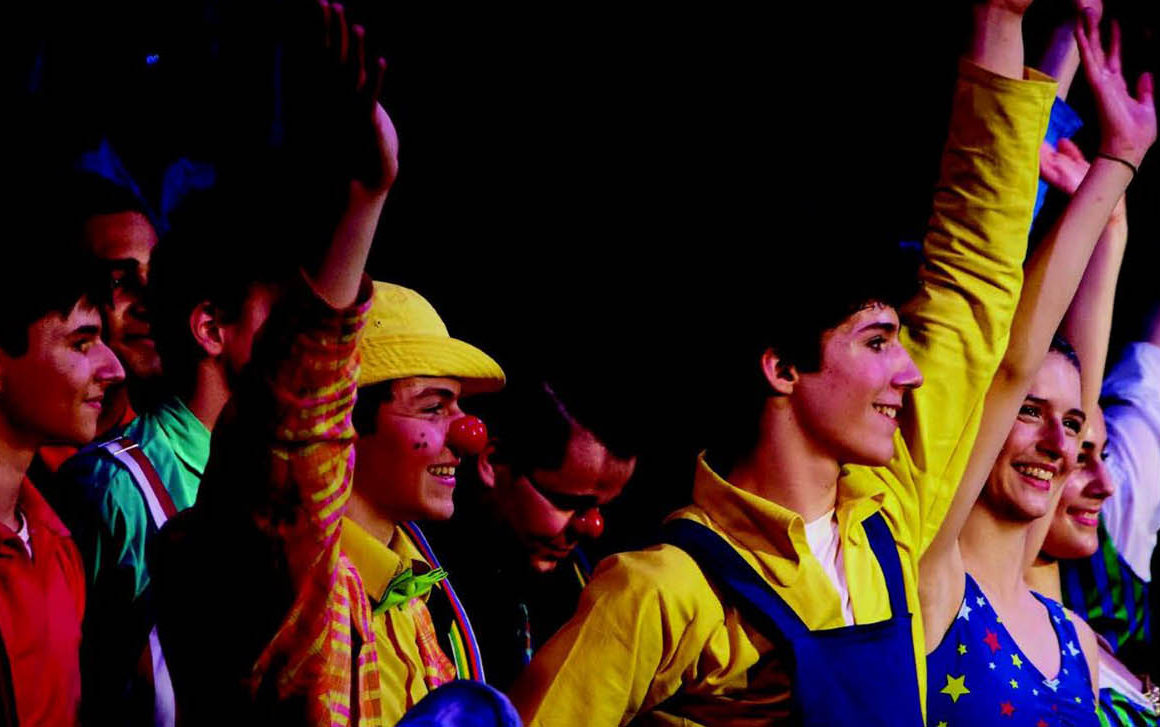 The dreams harbored by many young people of running away with the circus dates back well over 100 years. Who would not dream of boarding the train that carried the Barnum & Bailey Circus around the country, visiting far off places and performing death defying feats in front of enthralled crowds? For most who fancied that dream, it remained only that – a dream.

Some who did take the plunge likely discovered the dream was not what they planned as they ended up with jobs such as raising the tents, packing and unpacking gear, and cleaning up after a host of assorted animals. Still, for a rare few, the dream of performing in front
of awed crowds did, in fact, come true.

In the summer of 2019, two local teens and Hanover High School students William Ciardelli and Miki Hertog Raz realized that dream of performing in a circus without having to run away. These two seasoned performers toured with Circus Smirkus throughout New England as performers. 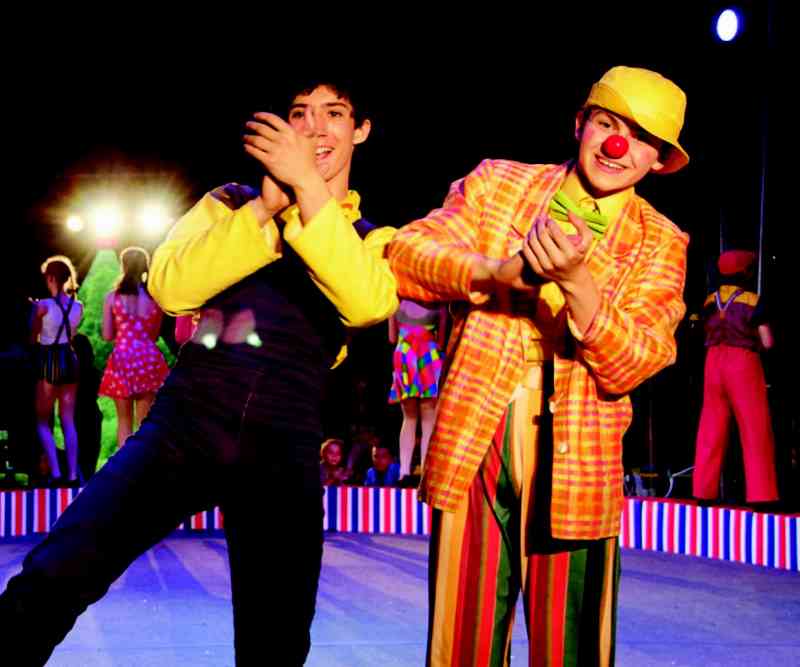 Miki Hertog Raz and William Ciardelli during the curtain call of the opening Circus Smirkus show in Greensboro, VT.

Although only sophomores at Hanover High School, these two young men are actually veterans in the world of circus performing. As students at the Marion Cross Elementary School, the two participated in the recreation department’s Van Lodostov Family Circus camps. In 2014, Miki’s family spent a year in Israel where Miki trained with Circus Florentine. William traveled to Zambia in 2016 and 2017 for a youth circus exchange with Circus Zambia. While home in Norwich, both boys worked on their acrobatic skills at Northern Lights Gymnastics.

Along with involvement at other regional circus training centers, the two participated in summer camps for youth sponsored by Circus Smirkus. As each of the boys began to specialize in individual acts, they received special instruction from renowned circus professionals, William in New York City, Miki in Maine.

Robin Allen LaPlante, director of external relations at Circus Smirkus, described her organization as, “A circus arts organization that inspires kids of all ages to develop artistic, athletic, and life skills through the power of performance. Our programs… blend the best of circus tradition and contemporary practice to create immersive experienc es that challenge kids to perform and live to the very best of their own abilities.” 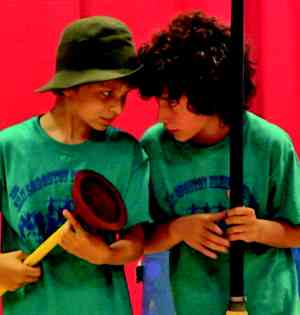 Auditions for the circus’s Big Top Tour, the one in which William and Miki participated, takes place in January 2020 for the upcoming summer’s tour. Applications for the tour come in from all over the world, with 40 to 45 kids selected for the live auditions held in
Brattleboro. Skill, personality, and the ability to work with a larger company play a part in the selection process. After the auditions, 30 young people are selected to perform in the upcoming summer’s Big Top Tour.

“The directors and coaches are looking at a variety of criteria to determine casting each year,” said Allen LaPlante. Besides skill and personality, those characteristics include stage presence, passion, versatility, maturity, and motivation, she said. Those selected show a high degree of competence and ability in all these areas.

Without question, the audition process is a stressful yet exciting time for the young performers. “The first time I auditioned, it was terrifying,” William Ciardelli said. “All the kids were so talented…but I really wanted to be on tour, so I trained all year for the (2019) audition and was lucky enough to be cast.”

Making the tour is especially tough for first timers. Past participants may re-audition for the next season, and Allen LaPlante said, “We see more than 60% of the Big Top Tour performers return each summer, leaving about ten spots for new performers from the live auditions.”

Not only did William make the cut, his lifelong friend and fellow performer, Miki, did as well. After making the Big Top Tour, Miki said, “I’m super excited to be part of a Vermont circus company.” The pair, along with almost 30 other young performers, then awaited the summer 2019 tour.

Everyone in the tour works together very closely. “So, it’s important for the kids…to be willing to work well together behind the scenes,” she added.

The 2019 season was the 32nd year for Circus Smirkus’s Big Top Tour that begins in June and runs seven weeks, ending prior to the beginning of the next school year. The tour consists of about 70 shows held in Vermont, New Hampshire, Maine, Connecticut, New York, and Massachusetts. The circus features a Big Top tent that seats around 750 people for each show. For the entire seven-week season, about 45,000 people attend the performances. Along with the performers and directors, a behind the scenes crew of over 50 individuals
work to make each stop and show success.

“Most of our shows are presented by community organizations, and they use the event as a fundraiser,” said Allen LaPlante. “Each year (these organizations) raise nearly $200,000 for education, the arts, and other worthwhile missions.”

Not only did Miki and William perform in these towns and states, they had the chance to perform for hometown friends and family. Circus Smirkus had several Hanover dates back in July.

Audience reaction is particularly important for the performers to help them get the most out of the experience. “I love seeing the kids in the audience sitting around the stage with their eyes wide and their mouths hanging open as they watch us perform,” said Miki.

Without question, the young performers with Circus Smirkus realize a great benefit from performing on tour. The parents and family members of these performers also see what a great experience this is for the young people. “The experience our son is having with Smirkus is truly life changing,” said parent Peter Ciardelli. “The show is incredible, but even more important is to see the self-confidence, teamwork, trust, and work ethic these thirty children build together.” That teamwork, the ability to work well with one another, is a critical component of the tour’s success. “Over the summer, the performers in the tour become one big happy family,” said Allen Laplante.

With the 2019 summer season over, Will had a chance to reflect on Circus Smirkus and what he learned. “Circus Smirkus was honestly a 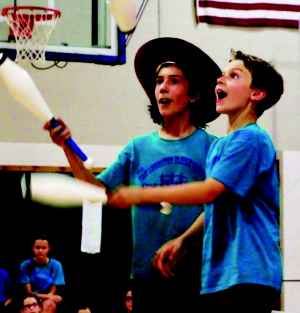 What he learned about performing for a big crowd was important for instruction for a circus performer. “I learned a lot about how big your actions have to be in the ring for everybody to see you,” he explained. “There’re hundreds of (spectators) and only one of you. To stand out, you’ve got to be big.”

In the future, Will sees performing in circuses a very real possibility for him. “It is a personal dream of mine to not only tour and perform with Smirkus, but with other professional companies as well,” he said. “If it’s a possibility to do circus as a lifelong career, I would and will go for it. I’m aiming for circus college, but of course nothing is for sure.”

In the near term, both Miki and Will will head to Zambia with other area youthful circus performers for a youth circus exchange program in March, led by Will’s mother, Brooke Ciardelli.