From Norwich to Washington, DC: Working in a US Senate Office

It’s clear from the pages of the Norwich Times that Norwich youth have covered the world through trips, jobs, and adventures of all sorts. This coverage includes Washington, DC, where Norwich is well represented in many government offices. Consider three recent Hanover High School graduates who currently work or recently held an internship in the office of one of our Vermont congressional members, Senator Bernie Sanders. What inspired these recent graduates to work in the Senate and move from Vermont to Washington DC, and what have their experiences been working as civil servants in DC? 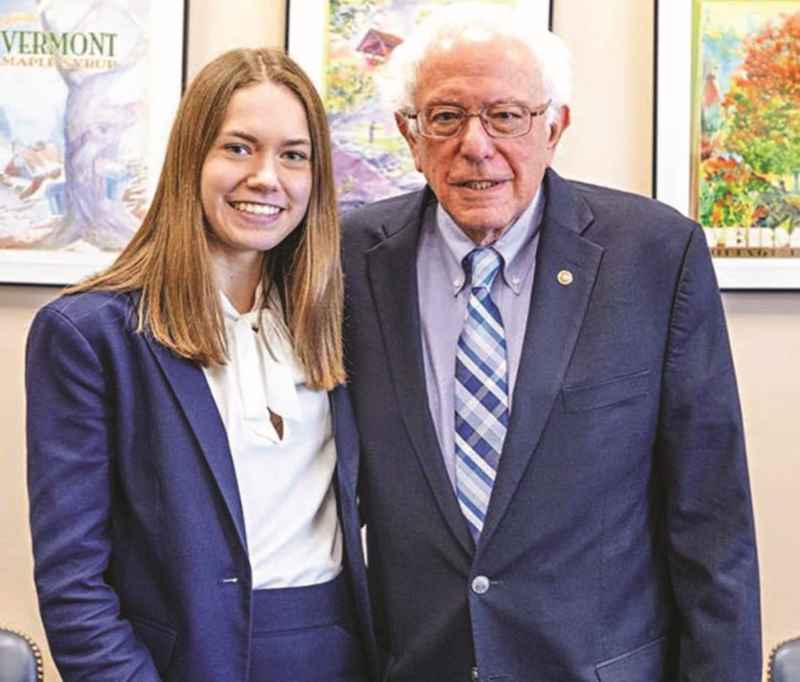 The most senior of the three Hanover High graduates, Ethan Hinch, had the opportunity to intern in Senator Sanders’ office in Burlington during the summer of his junior year at UVM. When Ethan graduated from UVM in 2015, he took a permanent position in the Burlington office, and two years later moved to a position in Senator Sanders’ Washington DC office, where he currently works as a Legislative Aide, helping draft legislation among other duties. All Senate aides have focus areas for which they are responsible; Ethan’s main focus is on Energy and the Environment. Katrina Menard graduated from UVM in 2016 with a degree in Community and International Development. She also worked in Senator Sanders’ Burlington office before moving to the DC office.

Katrina is currently a Legislative Correspondent, helping Vermonters who make inquiries of the DC office for support and information. Her focus areas include Energy and Environment, Agriculture, Food and Nutrition, Housing, Transportation, Community Development, and Science and Technology. She also conducts legislative research, as well as hires, trains, and coordinates the interns in the DC office.

Olivia Hinch, Ethan’s sister, graduated from Hanover High in 2016 and is a senior at Brown University, majoring in International Relations. She worked last summer as an intern in Senator Sanders’ DC office, where she conducted policy research, drafted correspondence, worked the front desk, and gave tours of the Capitol.

It should be noted that there have been many others of this same Norwich generation that worked in Senator Sanders’ office, including Libby Chamberlin (Legislative Correspondent), as well as Myra Parsonnet and Sam Alexander (Interns).

The motivation to become civil servants and work in Senator Sanders’ DC office is similar for all three: A desire to help Vermonters, to have an even bigger impact by working in the DC office, to experience city life, and to learn as much as possible along the way.

Katrina sums up her feelings by remembering her experiences in the Burlington office. “When I started working for Senator Sanders, I spent a year answering phones in the Burlington office, where staff help Vermonters solve problems related to federal services or agencies. Speaking with Vermonters every day about their difficulties really opened my eyes to the many hardships our state faces, hardships I find are often brushed under the rug in favor of the “idyllic” Vermont marketed toward tourists. Although my time in the Burlington office was the most emotionally taxing year of my life, in the DC office I think back to my experiences in Burlington every single day to remind myself why I am working for Senator Sanders, who consistently advocates for improving and expanding social programs in Vermont and across the nation.”

Olivia is also a supporter of the Senator’s policies. “Senator Sanders has put collective action at the head of his political platform. Policies like single-payer healthcare and the reduction of student debt aim to support every American.” Olivia wanted to intern in the DC office so as to both serve constituents from her home state, and to better understand the legislative branch of the federal government. “I really enjoyed the sense of working for a cause greater than myself,” she said. “Though often dysfunctional, the US Congress is a machine that runs largely thanks to the work of interns and staff assistants who do the grunt work.” Olivia also sought to engage on topics relevant to her international relations major, including conducting research on human rights issues in the Middle East.

“Life, liberty, and the pursuit of happiness are not within reach for many Americans, and I believe Senator Sanders’ proposals and ideas can help rectify that injustice,” says Ethan. “I recognize that my own life might look very different if I had not grown up in a community like Norwich, and I want to do everything I can to help every American have the same opportunities.” 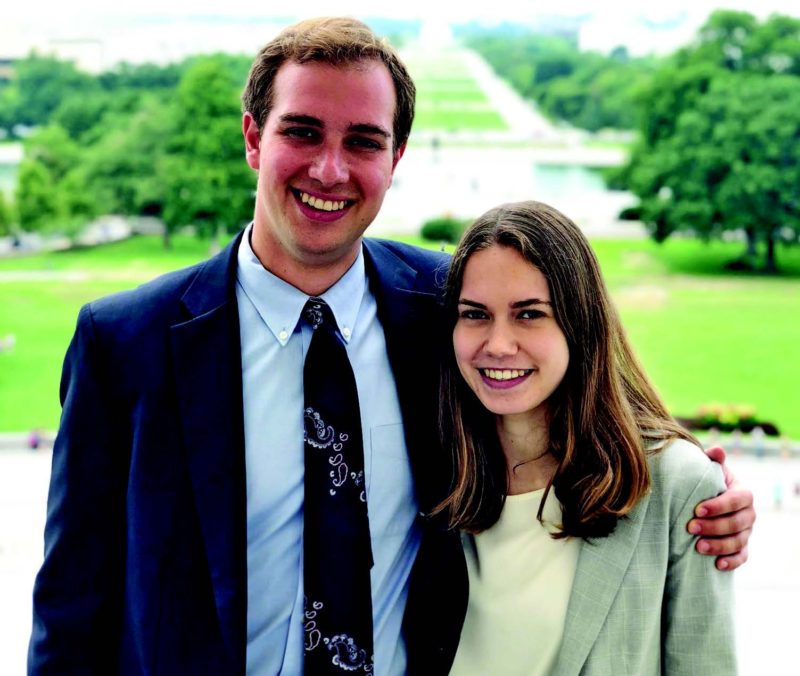 Ethan and Olivia Hinch on the Capitol Building Speaker’s Balcony

Working in the US Senate

Ethan, Katrina, and Olivia all say there are many things to like about working in the Senate. One aspect they all comment on is the huge opportunity to learn on the job. “The aspect I enjoy most about working in the Senate is that every day is an opportunity to learn,” says Katrina. “There are always classes, events, hearings, and briefings on the Hill, and I’m constantly blown away by the people who I am able to meet with and learn from. Some of my personal favorites: attending a housing briefing with “Evicted” author Matthew Desmond, and meeting with my personal hero, Chef Jose Andres, to discuss emergency relief efforts.” Ethan comments, “No two days are the same, and we are constantly learning new things about a variety of subjects. It’s also very interesting to see the nitty-gritty details of federal policy making and learn more about how to influence that process for the benefit of Vermonters.”

Highlights of Olivia’s summer in the DC office include the opportunity to discuss politics with not only Sanders’ staffers, but with interns outside of Sanders’ office as well. Olivia worked with her supervisor to organize lunches with interns from the offices of Senator Elizabeth Warren, Senator Kirsten Gillibrand, Senator Kamala Harris, and Senator Pat Toomey. Olivia remained in contact with many of these interns throughout her summer internship. She learned how the internship experience in Senator Sanders’ office differs from that of other senators. “The environment in the office tends to be pretty casual. Interns in Senator Sanders’ office are given freedom to start their own projects, which was surprising given stories other interns told me about their schedules marked to the minute.”

The biggest misconception related to working in Sanders’ Senate office can be summed up by the most common question the three have received about their jobs: “Isn’t it exciting to work on such an active and highly visible campaign?” In reality any Senate staffer,
whether in DC or Vermont, must remain separate from the campaign due to strict ethics rules reinforced by hours of ethics training. Campaign-related phone calls to the Senate office are simply rerouted to the campaign phone number.

Benefits associated with working in the Senate range from meeting politicians (Olivia highlights the opportunity to meet civil rights leader Representative John Lewis), to front row seats at a rocket launch delivering supplies to the space station, to petting a baby kangaroo at a zoo fundraiser. An unexpected quirk of working in the Senate is that while business formal is the standard dress code, the office environment is much more casual when the Senate is out of session and most Senators have returned to their home states. Jeans and even sneakers are not unusual for many staffers during this period. The contrast can be especially noticeable when new-hires come dressed in their new business suits only to find Senate is not in session. 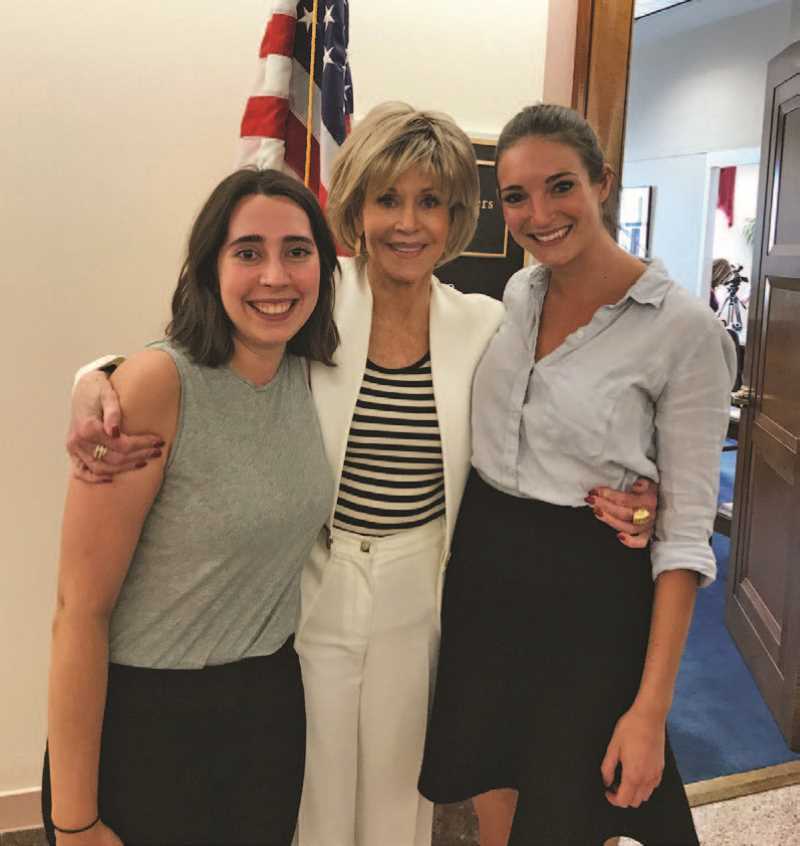 All three had to adapt to life in DC Housing for younger congressional staffers usually means sharing a house or apartment with several other young professionals. Instead of having a car, they use public transportation (mainly the metro), walk to work when possible, or use a ride-sharing service like Uber. And now Jump, Bird, and Lime are becoming more popular.

All have taken advantage of the benefits that living in DC offers. Katrina says “I really enjoy the food scene in DC and the free events held by the city. For example, the National Gallery of Art (NGA) will occasionally stay open after-hours with live music, food vendors, and special exhibits. They also have free concerts in the NGA Sculpture Garden, and free yoga in the Botanical Gardens.” As might be expected, easy access to a variety of museums has been popular. This past spring, Ethan and Katrina, along with many other staffers,
took part in the annual Cherry Blossom 10 mile run, which winds though the blossoming cherry trees and along the Potomac river.

Not all of the adaptions to DC were easy, as culture on “The Hill” can be quite impersonal. “I’ve found that in DC I know three times as many people as I did living in Vermont and going to UVM,” comments Ethan, “but I know each of them about a third as well.” He continues, “Many social interactions boil down to your business card and the name of your boss, and it’s easy to wonder whether the other person is just trying to figure out what they can get from you.” Katrina offers the same observation: “What they say about Hill culture is very much true. People are more likely to ask who you work for than to ask for your name. The only thing you can really do is try not to normalize
this behavior.” And part of the modus operandi for any staffer is networking. “At first, the idea of networking really intimidated me”, says Olivia, “but I have now become accustomed to reaching out to others for career advice. That does tend to be the culture in DC, for better or worse. Happy hours and other networking events are very prominent.”

What do the Norwichians miss the most about Norwich? It’s not called the Green Mountain State for nothing – they all miss the Vermont countryside after living in such a dense urban setting. “The trees! A more manageable level of humidity! Dan & Whits soft serve!” reports Olivia. Ethan shared a more community based observation: “The tight-knit community, shared values, and the rural setting. Most of all, I realized Norwich feels like a place that you can call home, which does not happen for a lot of the people who have lived in DC for many years.” “The best thing about growing up in Norwich,” says Katrina, “is that you get to carry that community with you, no matter where you go. The people who I’m closest with in DC are mostly from Norwich and Vermont, and we frequently talk about how the town shaped our values, our goals, and our shared experiences.”

So what is it really like living in DC, working for the federal government? There is a saying in DC that goes something like this: “People inside the beltway think working in government is as portrayed in The West Wing. People outside of the beltway think it’s like House of Cards. And in reality, it’s like Veep.” Asking the three Norwich natives about these possibilities, I could not get them to relate to any of these choices. However, they did share that in their experience everyone working in the Senate office is very committed to helping Vermonters.