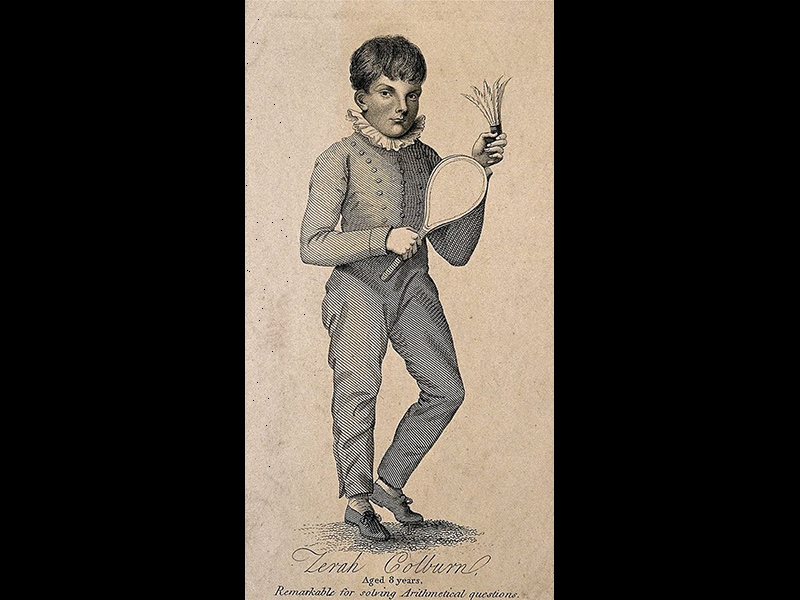 As the new school year begins, it’s probably a good idea for all of us, not just students, to brush up on our math skills. Let’s try a few questions. Here’s the first one: How many seconds in eleven years? Is everyone reaching for a calculator? The answer is 346,896,000. Next try this: What sum multiplied by itself will produce 998,001? Answer: 999. How did you do? Well, now consider this: in 1810, a six-year-old Vermont boy answered both of these questions in 8 seconds. His name was Zerah Colburn

Born in 1804 in Cabot, VT to Abia and Betsy Colburn, Zerah was the sixth in a family of eight children. Fortunately, when Zerah was only 29, he published an autobiography describing his early life and travels. Oddly, the Memoirs of Zerah Colburn by Himself was written in the third person and Colburn referred to himself as “Zerah” or “the boy.”

Zerah grew up on a small farm. His father worked as a joiner to support the family. In August 1810, when Zerah was about six years old, he was playing near his father’s work bench. His father heard him reciting math facts: 5 times 7 is 35, and 6 times 8 are 48. His father was surprised, especially since his son had only spent six weeks at a village school. So he asked Zerah the product of 13 times 97, “to which 1,261 was instantly given in answer.” Astounded, his father “concluded that something unusual had actually taken place; indeed he has often said he should not have been more surprised, if someone had risen up out of the earth and stood erect before him.”

Later his father took the boy to Danville, where court was in session. Zerah was questioned by the judges and lawyers. They, too, were impressed by his mathematical skills. They encouraged Mr. Colburn to take his son to the legislature which was to convene in Montpelier at the start of October. There a large number of people “had an opportunity of witnessing his calculating powers, and the conclusion was general that such a thing had never been seen before.” Questions were asked to stump young Zerah, “but he answered them correctly; for instance, which is the most, twice twenty-five or twice five and twenty? Answer: twice twenty-five.”

From Montpelier the father and son headed to Burlington. But, soon, Mr. Colburn realized that larger audiences and wealthier patrons were required if he wanted to take advantage of his son’s gifts. So, he and Zerah headed to Boston. Along the way they stopped in Hanover and met Dr. Wheelock, the president of Dartmouth College, who proposed to “take upon himself the care and expense of Zerah’s studies.” But Mr. Colburn could not be convinced to accept the generous offer.

In Boston, Zerah continued to astonish audiences at public exhibitions. Soon a “number of the first gentlemen” in Boston wanted to see to Zerah’s education and establish, “a situation where he might be enabled to pursue the studies which seemed most adapted to his genius, and render it profitable to the world.” They offered to raise $5,000. Mr. Colburn would receive $2,500 and the other half would be used to keep the boy under their control and educate him. But the offer was “not equal to the exalted expectations of his father.” In addition, being separated from his son “did not harmonize with his views of parental obligation.”

Abia and Zerah traveled to New York, Philadelphia, and Washington, and made enough money from Zerah’s shows to continue to the next city, but not enough to cover an education for the boy and a profit for the father. “Mr. Colburn began to think that his situation and prospects were not likely to be improved by a longer effort in his own country.” In addition, as one traveler who met the Colburns, pointed out, “the desire of the father to have his son educated has been superseded by the curse lust for gold.”

In April, Zerah and Abia returned to Norwich where Mrs. Colburn and the rest of the family had come to stay with relatives. There was speculation that she had traveled to Norwich to encourage her husband to return home. But Abia declined his wife’s pleas. Finding little interest in Zerah’s talents in America, he decided it would be more profitable to display the young genius in England. So on April 3, 1812, even though a war had just begun with England, the two walked aboard the New Galen and set sail for Liverpool.

In London, Zerah’s performances continued to dazzle audiences. Despite the well-attended performances, there was little profit. A British friend of the Colburns suggested that an image of Zerah would be a money maker. So a drawing was created and engraved, and copies of his image sold well. This engraving is the only likeness the world has of Zerah. A close look at his left hand shows that the eight-year-old boy had six fingers. Several of his brothers, his father, and great grandmother also had an extra finger. Zerah had the extra finger removed while he was in England.

With bills mounting in England and no patron on the horizon, Abia and Zerah set off for Paris in the spring of 1814. As soon as they arrived, a language teacher was hired for the boy and after a few months, Zerah was fluent in French. When his language course concluded, he entered the Lyceum Napoleon in Paris.

During their time in Paris, the Colburns met with John Quincy Adams, who had come to Europe in early 1815 to sign the Treaty of Ghent, which ended the War of 1812. “The father is a plain New England farmer and by all appearance a very ordinary man,” Adams wrote. “His language is that of our most uneducated people… Zerah is certainly an astonishing and promising boy; but if his promise is ever to realize anything, the sooner the father commits him to the tuition of the Polytechnic School the better.” Sadly, Mr. Colburn did not follow the advice of the statesman.

In the summer of 1816, once again short of cash, Abia pulled Zerah out of his French school and returned to England, where Zerah’s exhibitions began again. In London, they connected with the Earl of Bristol who raised funds for Zerah to attend the prestigious Westminster School. After problems with hazing from the older students, it was decided that Zerah would live with his father and become a day student. The money saved from boarding at the school was enough to support both the father and son. This plan worked well for the next three years, until Abia had another disagreement with the school administration and removed the 15-year-old Zerah from the Westminster School for good.

With little interest in Zerah’s mathematical wizardry, Abia cooked up several new money-making schemes for his son. First, he had Zerah take acting lessons and they traveled from London to Ireland and Scotland looking for roles, but found no offers. Then he had Zerah try his hand at writing plays. This too was a failure. Finally, when he was 18 years old, Zerah opened a day school of his own. But the school made very little money and Zerah had to close it for good when his father became ill. Abia, who never saw his dreams fulfilled, died of consumption (tuberculosis) in February 1823. He was 54.

With no money and an ocean away from his home in Vermont, Zerah told the Earl of Bristol of his father’s passing and said he was heading to America. Once again the Earl of Bristol generously assisted Zerah and gave him money for his homeward passage.

When Zerah reached America, he hired a man in Whitehall, NY to drive him by wagon to Cabot. He arrived at his mother’s house near sunset on July 3, 1823. “Not knowing who lived there, they inquired of an elderly woman who was at the door, if she knew where the widow Colburn lived? She replied that she was the woman.” Zerah, who left home when he was six, “made himself known as well as he could,” but his mother failed to recognize him until his brothers and sisters appeared and agreed that this was indeed their long-lost brother who hadn’t communicated with the family for 13 years.

Mrs. Colburn, now 65, had “by a course of persevering industry, hard fare, and trials… succeeded in supporting herself, besides doing a good deal for her children.” But she was struggling, so Zerah established a school in Cabot and worked to support the family. However, the school closed after two months, so Zerah left Cabot and worked at a school in Fairfield, NY.

In 1829, Zerah married Mary Hoyt and between them they raised six children. There is no evidence that any of the children inherited their father’s math wizardry or an extra finger. In his memoir, Zerah reflected long and hard about the consequences of his calculating gifts and expressed his regrets at times that “his mysterious faculty was bestowed.” He also felt sorrow for his father, who abandoned his family and country, “and the trials which, after two or three years of prosperity, followed him to the close of his life, that he is led to believe his father paid dearly for the singular talent conferred on his son.”

In 1835, the now Reverend Zerah Colburn became a professor of Latin, Greek, French, and Spanish at Norwich University, but surprisingly, not of mathematics. He taught there until he died of tuberculosis, the same disease that had taken his father, in 1839. He was only 35 years old.

Zerah is buried alongside his wife in Meeting House Cemetery, the thirdoldest cemetery in Norwich. His tombstone is located in the northwestern corner, a quiet and peaceful resting place for one of Vermont’s most remarkable mathematical prodigies.