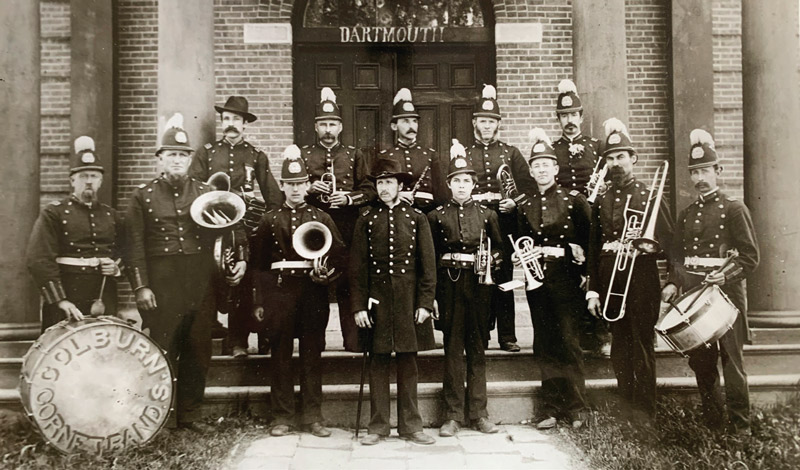 A five-mile drive from Norwich along the Connecticut River and a small meander up Route 132 will drop you into a unique portion of Norwich’s history – the hamlet of Union Village, a community shared by two towns and two counties.

Union Village had its start along the Ompompanoosuc River, which begins in Vershire and runs through West Fairlee and Thetford before it joins the Connecticut River in Norwich. The river provided several locations along its banks for the first White settlers to establish water-powered mills. In the 1790s, the Locke brothers erected a grist mill on the “Pompy” about 4 miles from the point where it empties into the Connecticut River. By the turn of the 1800s, John Hall had purchased the mill, and he then added a sawmill. Quite the entrepreneur, Hall also built and managed a tavern in the area and opened the first store. Soon the stage route from Boston, Concord, Hanover, and Montpelier rumbled through the village. With all the success that he brought to the area, the hamlet became known as Hallville.

Hallville had the unique distinction of being divided, smack dab in the middle, by the town line between Thetford and Norwich and the counties of Orange and Windsor. With that division in mind, the name Hallville was dropped. The small hamlet became officially known as Union Village with the opening of the post office in the general store in 1841. Morrill J. Walker,  who was a partner in the store, became the first postmaster.

The early settlers built a dam north of the village that provided the energy for the mills, and they erected a covered bridge over the flowing water. The water from the dam was led to the mills in a long wooden flume. Each person who purchased land along the river also purchased water rights, but there was a priority system for who could use the water. First on the list was the gristmill, next came the woolen mill with its carding machines, and finally the furniture shop could use water for turning its lathes. By 1851, Phillip Cambridge, the last owner of the woolen mill, where raw wool was turned into cloth, employed 25 to 40 people. In addition, the village had a sawmill, a carriage shop, three shoemakers, a tailor, and a gravestone shop. The businesses were thriving until, after 36 hours of constant rainfall, the flood of 1869 washed away the dam, bridge, and most of the mills.

While the flood of 1869 was a significant blow to the community, a Beers Atlas map from 1877 shows that the area was once again prospering. A bustling general store and post office, owned by the Blasidel family, became the business and social center of the community. According to one resident, “There the men gather in groups to discuss all important topics. And nothing is settled until after it has been thoroughly canvassed on this popular forum.” The storytellers had time on their hands and “took pleasure in repeating their own stories over and over like sailors at sea spinning their yarns.” South of the general store on the Norwich side of the village was a carriage shop, and M. S. Colburn’s Blacksmith Shop and Hall. Along with being the village smithy,  Myron Colburn played a mean E-flat coronet and in 1872 he organized “Colburn’s Cornet Band.”  Members came from various towns, and their uniforms featured lots of silver buttons and plumed hats. They played twice a year for Dartmouth athletic events, at political rallies, and in 1880 took third place at the International Band Tournament held at Lake Memphremagog in northern Vermont.

By 1815 there were enough worshippers in the area that a church was built 2 miles south of Hallville. In 1836 a larger church was built in the village that served both Methodist and Episcopal members. The entire cost of the building was $1,800. The “Centennial Celebration” program from 1936 noted that pews were sold to families to pay for the construction. In 1849 the stewards of the church agreed to raise the preacher’s “allowance” and the church records show that of the six people named as stewards, three were women. “The interest and strength of women’s work here,” explained the Centennial program, “continues to today.” In the early days, the church seemed to be quite formal. “In 1880 it was voted to hold  ‘no entertainment but Christmas in the church’ but behavior patterns changed.” By the 1920s, plays were presented to help pay for “renovation and redecoration.”  “Through prosperity and depression,” concluded the program, “through ‘ups and downs,’ people have rallied to the needs of ‘the little brick church’ and for which she has stood, for a century.”

Union Village had a one-room schoolhouse, erected “sometime before 1836.” The school was on top of the county line on the river side of the main road. The northern part of the building was in Thetford while the southern half was in Norwich. There was a dividing line of nails through the center of the floor, and according to Ernest Bond, who attended the school, “Norwich children sat on the Norwich side and the Thetford children on the Thetford side.” How strong the division was between the two sides of town is up for debate, but one long-time resident remembered a Thetford vs. Norwich spelling match. “The word that ‘stumped the experts’ was ornithorhynchus (or ni tho rhyn’ chus): An egg-laying mammal with a duck-like bill” (in other words, a platypus). Regardless of any divisions, the two towns shared the expenses of the school.

Because the school hugged the river the only place for a playground was on the road in front of the building. Nonetheless, this was a safe area for recess, “as the road was seldom used and only with horse and buggy.” Perhaps the traffic picked up, for the school was hauled across the road in 1925 and set next to the church. The school closed in 1951 and was sold to the “Pew Owners Association of the Union Village Methodist Church” for $1,005, to be used as a parish house. The building was refurbished and a new kitchen was installed to help with church suppers. As one resident noted, “It seems quite fitting that this schoolhouse should be closely connected with the church there for they always have. I’m sure the little schoolhouse still feels it has its nitch [niche] in the hearts and lives of many people.”

While entirely on the Thetford side of town, the Union Village Dam has had a significant impact on Norwich and its outlying hamlets. Before the dam was built, storms devastated villages along the entire Connecticut River and caused flooding as far south as Springfield, Massachusetts, and New Haven, Connecticut. The November flood of 1927 stands as the greatest natural disaster in Vermont’s history. The flood waters claimed 84 lives, including that of the lieutenant governor at the time, S. Hollister Jackson. More than 1,280 bridges were destroyed, many of which had been built soon after the 1869 flood. In 1936 and 1938, floods turned the Pompanoosuc area near Kendall Station into a lake and washed away bridges and roads in the area. Something had to be done. Dams could not be built on the Connecticut River because it was used for logging and hydroelectric power. So a plan was devised by the Army Corps of Engineers in the 1940s to build a series of dams from Rhode Island to the Canadian border along the Connecticut River tributaries. The Union Village dam site was selected to control the Ompompanoosuc River. The 1,100-foot-long 170-foot-high dam was completed in 1950 and was the largest dam built on any of the tributaries. The project had some negative impacts. Several farms were demolished, grazing pastures were lost, and the dam construction blocked the town road to Tucker Hill, so Route 132 was extended up the hill just before the southern entrance to the village.

Union Village is a beautiful place to visit. Although the village store is gone, the brick church and schoolhouse sit on a small hill and welcome visitors to the village. There are places to picnic and hike near the dam. But the covered bridge is one of the best connections to the past. The current bridge has spanned the river since 1867 and was listed on the National Register of Historic Places in 1974  It is the longest multiple-kingpost span in the state and rests on original abutments of stone that have been capped in concrete. Walk across it today and you can almost hear the clip-clop of a horse-drawn buggy heading up the hill to Thetford.

For a closer look at Union Village, be sure to join the walking tour of the area next summer led by the Norwich Historical Society..

Next post »
Favorite Moments with the Hartford-Norwich Holiday Basket Helpers