March 7, 2016by The Norwich TimesNo CommentsAll, Your Green Spaces

The Norwich Green: An outdoor gathering place where community happens 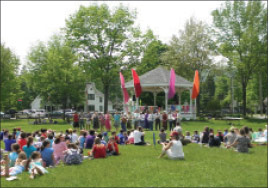 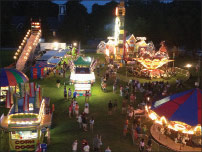 For me, the Green is just irreplaceable,” says longtime Norwich Recreation director Jill Kearney Niles. There is heartfelt emphasis in her voice as she lists a few of the activities she organizes on the Green: practice for multiple sports, including soccer, cross-country running, biking basics, and lacrosse (starting in kindergarten). “After-school programs are so popular because they’re so convenient, like parent-pitch softball,” she continues. Organized sports programs are just a fraction of what happens on the Green, Norwich’s inviting, open center, artfully framed by civic, educational, and spiritual focal points.

The school owns most – the fraction varies with who’s talking – of the Green; the corner with the water fountain (donated by the Women’s Christian Temperance Union) and the bandstand belongs to the town. One group that focuses on water, though not from the fountain, is the Hosers, the dedicated volunteers who struggle to keep the ice rink in good shape. Weather may not cooperate, but the Hosers don’t give up. When there is ice, it gets used long past dark. Seize the moment!

One of the biggest events on the Green, of course, is the Norwich Fair, now organized by the Lions Club. For many years the Fair was a project of the churches of the town, but when Marion Cross School expanded, the construction spread out on the Green. The Fair moved to land on Route 5 which eventually became Dresden school playing fields. At that point, roughly 10 years ago, the Fair returned to the Green. Ed and Joyce Childs, hardworking Lions, have been stalwart Fair organizers for years. “I like having it back on the Green,” says Ed. “The event became more family-focused when it moved back to the Green.”

Evolution has happened. In the old days on the Green the major rides were a Ferris wheel and the swings. A parade was a big feature of Saturday morning, with floats, decorated bicycles, and yokes of oxen (ready for the ox-pull later in the day). In the Rt. 5 years, there was no parade, and energy for parade participation has generally not resurfaced. Faster rides such as the Tilt-a-Whirl took over from the Ferris wheel. The popular Dunk Tank appeared, where generous-hearted town celebrities offer their dignity for the Lions fundraiser.

The Fair is about 65 years old. “I don’t think we’ve had any disasters,” says Ed, aside from rain. “But people who live in Norwich – if they can’t go today because of rain, they’ll go tomorrow.” Joyce recalls working in the bank Friday afternoon as final setup proceeded, and having people come in saying “You’ve got to do something!” This was back when the churches still ran the Fair, and the name had gone up on the funhouse: Satan’s Curse. “I couldn’t leave because we were really busy,” she remembers, but the sign was removed. Still, when Saturday brought torrents of rain, people wondered… 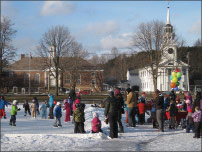 The Norwich Women’s Club sponsors summer concerts in the bandstand. People bring blankets or folding chairs, and maybe picnics, as they gather to hear local and regional musicians. The style of the music varies, but the entertainment from people-watching and catching up with neighbors are reliable constants.

A subtle feature of the Green is the collection of trees that surround it. Ever notice? They’re all different. In the late ’60s conservationist “Bill Ballard wanted to create an arboretum of trees that would survive this kind of weather,” says Bill Hammond. There were plaques on the fence identifying the varieties, but then the fence was replaced. Now the third grade is working to identify the trees. They have a list of what was originally planted, some of which have been cut down. A real world challenge.

Spring events on the Green include MCS’s Mayfest, in which all the students participate in traditional songs and dances. The whole community is welcome, says Hammond. A more elaborate seasonal festival is the summer solstice celebration put on by Revels North in June. Retiring Production Manager Bonna Wieler lists just a few of the features of the event: Morris dancing, singing of multiple sorts, mummers, crafts, and food. “It’s grown out of community celebration,” she says. After all the hard work to produce the event, “the rewards are everything from the look on a kid’s face, and the joy you see on the Green when people celebrate together. Community is built among people who sing together, and there’s the joy of carrying forward beautiful traditions honoring the earth. The community strengthens when it celebrates together.”

« Previous post
Pulling Together for the Legion: An amazing two-day transformation, and the people who made it happen
Next post »
Elder Profile: Greg and Toni Prince