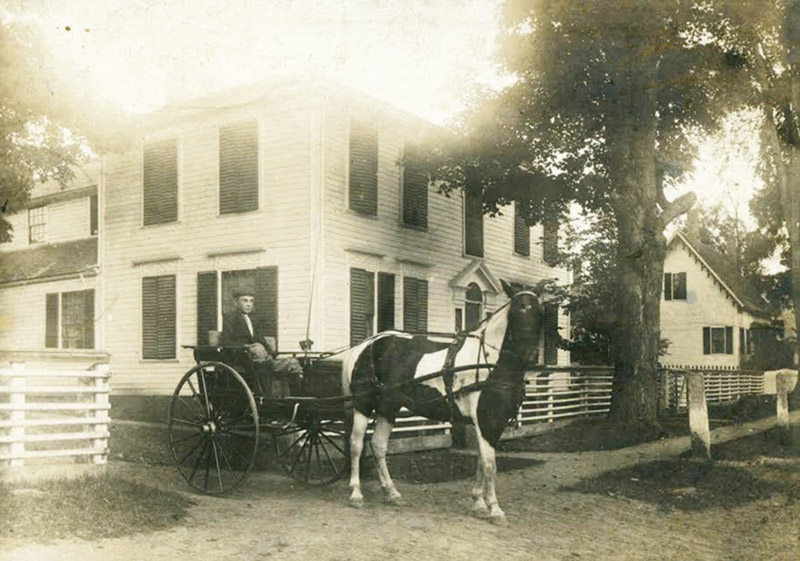 In 1824, Edwin Ferry Johnson, a young cadet at Alden Partridge’s military school, hiked up Norwich’s Prospect Hill, plunked himself down and drew a detailed pen and ink sketch of Norwich with Hanover in the distance. The drawing includes the South Meeting House, which later became the Congregational Church, and Alden Partridge’s American, Literary, Scientific & Military Academy, which became Norwich University in 1834. Johnson’s sketch shows a prosperous village that had seen its population grow from 1,158 in 1790 to 2,316 in 1830. Wool production, apple growing and farming were fueling the growth. A toll bridge to Hanover was built in 1796. A year later, Jasper Murdock built his elegant home that was both a stagecoach stop and tavern near the corner of what is now Beaver Meadow Road and Main Street. A post office opened in 1805.  The village was thriving; into this development stepped the Emerson family from Westfield, Massachusetts.

From the day they first arrived, Elihu, Joseph and Thomas Emerson and their cousin, John, worked in the community as merchants, speculators, smithies, farmers, builders and town officials. Acting singly or together, the Emersons invested in many properties, including a 100-acre lot of two thousand apple trees. 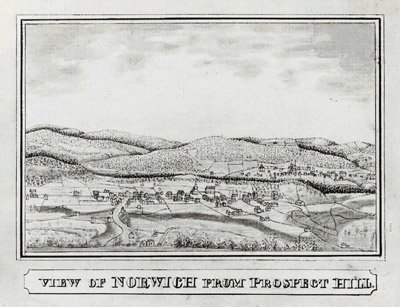 Elihu Emerson, the oldest of the Emerson men, headed from his family home in Westfield, Massachusetts to seek his fortune in Norwich in 1792, soon after he turned 21. Westfield is not far from the Connecticut River, so it’s possible Elihu paddled upstream to Norwich. But, alas there is no record of how he first journeyed to his new home. Shortly after he arrived, Elihu, who was a blacksmith by trade, set up a shop. In 1794, he built just south of his blacksmith shop what many believe was the earliest brick house in Norwich. The house at 332 Main Street still stands today, opposite Beaver Meadow Road. In 1798, Elihu and Thankful Grant were married and raised six children together. The large family may have prompted him to build a larger home next to his first home which is known today as the “The 1820 House.” The exterior of the house looks much as it did when it was first constructed, only a projecting porch now covers the front door.  “The interior is noteworthy,” explained The Early Houses of Norwich, Vermont  “for the beautiful treatment of one of the main rooms on the second floor… there is a paneled fireplace and on either side of it recessed alcoves with seats, the alcoves being spanned by graceful arches.”

Mr. Emerson was a sturdy New Englander.  He outlived his first wife and then also his second wife who died when she was eighty.  According to one story, Elihu, who was considered quite agile his whole life, placed his hands on his horse’s back and mounted “thereon from the ground on his seventy-first anniversary of his birth.”  Elihu died at his daughter’s home in Leicester, Mass in 1873 at the “advanced age of over one hundred and two.”  His remains were returned to Norwich and placed in the Fairview cemetery near his brother Joseph’s grave.

Joseph Emerson followed Elihu to Norwich and, in 1796, purchased land on “the highway leading from Dr. Joseph Lewis’s house to the Meeting House.”  Around 1815, Joseph built a house on his land “at a time when he was in his middle forties and just beginning his active career as a builder in Norwich.”  The “1815 Emerson House” still stands on the east side of Main Street. The building to the north, which now houses the Ledyard Bank, was once his workshop where he made a living as a builder and a hat maker.  According to The Early Houses of Norwich, Vermont the house was “almost a twin to Elihu’s house…and the decorative treatment is unusually rich, and would lead us to suppose that Joseph was fond of all kinds of carved detail, panelling, etc.”

Joseph was “engaged considerably as a builder”—and considerably is the word.  Following the construction of his own home he built “The Partridge House” on Main Street. Now a B&B, the house is an impressive brick structure. Next time you walk by, take a look at the doorway and the triple window above the door which is “…itself treated like a doorway with sidelights and elliptical fanlight.” Joseph also built the third brick house on the left as you enter Norwich and probably had a hand in the building of his brothers’ homes. 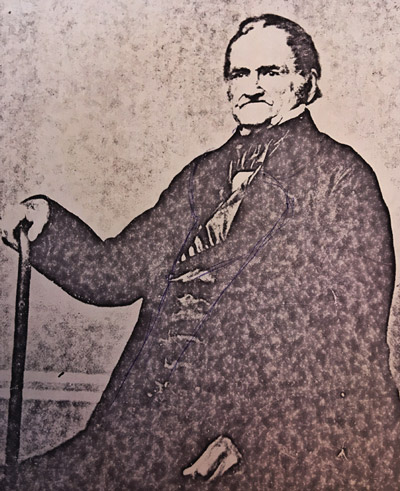 One of the striking features about the brick houses built in Norwich between 1810 and 1830 was the beautiful color of the brick described as “a warm soft red, almost a salmon-pink.” These bricks were made in a brickyard located on Blood Brook near the intersection of Main Street and Route 5. In all probability, the Norwich brickyard was the earliest brickyard in this region.

Thomas, the last Emerson brother, arrived in Norwich in the early 1800s. Thomas “was bred a merchant” and “parlayed an inheritance from his great-grandfather Pratt, a Boston banker, into a fortune.” In 1807, Thomas moved to Detroit, Michigan where he formed a partnership with Stephen Mack. The firm Emerson, Mack & Conant, “kept a general assortment of dry goods, groceries and hardware.” They traded with Native Americans and the American military and had a very lucrative business until Detroit was surrendered to the British in 1812. With this “interruption of business, Mr. Emerson withdrew from the firm and retired to Vermont where, with ample means, he entered upon a more public and notable career.”

When Thomas returned to Norwich to join his brothers, the Emerson community spirit kicked into high gear. In 1817, Thomas and his brothers pledged almost 50% of the funds needed to erect the South Meeting House which later became the Congregational Church. Joseph became the builder of the Meeting House. Half of Thomas’s $600 pledge paid for a Revere Bell that he had carted to Norwich by oxen from Massachusetts. Although it is not mentioned in any history, a simple yet elegant weather vane atop the South Meeting House was almost certainly crafted by Elihu Emerson, the first known blacksmith in town. That same year, the Emersons backed Alden Partridge’s desire to build a military academy on the Plain. Today this is the village green. In 1819, Joseph Emerson was awarded the contract to build the Academy. He finished the South Barracks in 1820 and completed the North Barracks in 1832. In 1820 Thomas became involved in politics and represented the town between 1824-1829 as a Jackson Democrat. “Mr. Emerson was a good representative, in his day and on a small scale… was a good example of a political ‘boss.’”

In 1820, Thomas Emerson bought a lot from Cyrus Partridge and built his own house diagonally across from “his” meetinghouse in 1822. Today, the house holds the post office and is known as the Emerson House. Not to be outdone in the 1820s, John Emerson, Thomas’ cousin, built a large house on Main Street, just beyond the Main Street-Beaver Meadow intersection and opposite the Grange Hall. “Originally this house was entirely heated, of course, by fireplaces, but in 1889 or 1890 the first furnace and the first bathroom in Norwich were installed.”

The Emersons left their mark on Norwich in more ways than one.

Today, if you have the time to stroll down Main Street you can still see many of the structures that Edwin Johnson sketched in 1824. If you look closely at the drawing, you can pick out Elihu Emerson’s blacksmith shop and the home he built in 1820. And, further still, you can spot Joseph’s home on Main Street and Thomas’s home which is on a diagonal from the South Meeting House. With a savvy eye for style and sturdy building, the Emersons set the standard in Norwich for home construction. Their legacies are with us today, two centuries after they were constructed.

Many thanks to Nancy Osgood for her detailed research on the Emerson family. To learn more about the early homes of Norwich be sure to attend the House and Garden Tour, “The Art of the Past: A Stroll Down Norwich’s Historic Main Street” on June 23rd.
Share: