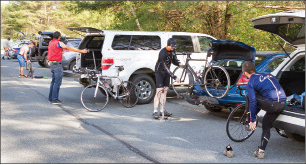 Behind the windows of The Bike Hub on Route 5 South next to the Farmer’s Market in Norwich are all the sexy toys that makes the two-wheel spandex crowd go weak in the knees: acres of carbon fiber; curvy, other-worldly frame designs, seemingly inspired by the space shuttle. But the shop offers more than eye candy for the road biker – true to its name, it has become the nexus for a vibrant scene of recreational (if sometimes quite competitive) group rides several times a week throughout the summer and early fall.

At 5:30 on a Wednesday night, a cacophony of beeps can be heard across the parking lot as dozens of GPS devices are reset. Guys – and a few women – of all ages, in loud spandex and varying degrees of fitness, astride bikes ranging from “good enough” to “only the best will do” prepare to embark on a 25 mile ride around the Upper Valley. It’s early in the season, so only about two dozen riders have shown up; later, the group swells to 40-50 riders. Usually, the pack will divide into at least two, sometimes more groups, each riding at its own pace, and riders self-selecting where they want to be. The “A” group consists of a ferocious bunch of riders eager for an opportunity to push themselves and each other to the limit. It’s all in good fun, but not without some blood, sweat and tears at times. 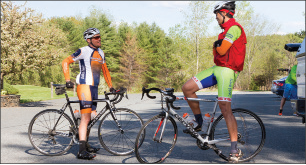 The Wednesday night rides from he Bike Hub are as much a social event giving local riders a chance to catch up with one another as it a chance to get out and ride together.

Still, David from Grantham is eager to put the ride and the riders into perspective and dispel some myths while he waits for the rest of the pack to form up. “Honestly, nobody is trying to be Lance Armstrong here,” he says with a laugh and nods of approval from the bikers around him.

Nik Fiore, a regular from Lebanon, describes the dynamic of the group ride this way: “It’s first and foremost a social event that gets each of us out to ride after work at least once a week. Then, once you start riding with a group, they’ll start expecting you to show up, and to be ready to ride at their pace, so suddenly you feel compelled to stay fit between the weekly rides.” 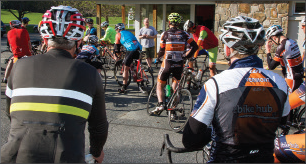 Bike Hub owner Bill McFadden (center) gives the assembled Wednesday night group riders a quick recap of do’s and don’ts before sending them on their way.

Of course, that level of self-imposed pressure may not be for everyone, and Bill McFadden, who owns the Bike Hub and launched the group rides about five years ago, acknowledges that some may find the format of the Wednesday night ride daunting and intimidating. “Even the slow groups ride fairly fast,” he says, and tools like the activity tracking app, Strava, has made it easier than ever to measure your efforts against your fellow riders and to feel compelled to push harder. McFadden does worry that this may keep some from showing up, but while the shop promotes the ride and offers some support, the group has taken on a life of its own and is not for him to change.

But if the Wednesday night Bike Hub ride is too challenging, other group rides continue to pop up in the area. Some are exclusively for women, others are geared towards those who are new to group riding; still others are established as preparation for the Prouty or some other charity ride.  And, regardless of your level of ambition, skill and equipment, a group ride is a great way to get out on the roads. The Upper Valley Velo group on Google is probably the best place to find one and connect with fellow cyclists. 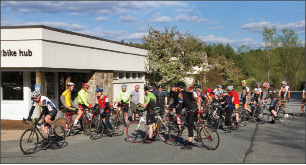 And they’re off. Bike Hub owner Bill McFadden (grey t-shirt) watches as the assembled Wednesday night group riders set off on their ride.

Rides leave from
The Bike Hub in Norwich
Wednesdays at 5:30pm
and Saturdays at 9am
For detailed route information on these rides as well as other group rides in the area, check out
www.groups.google.com/d/forum/upper-valley-velo