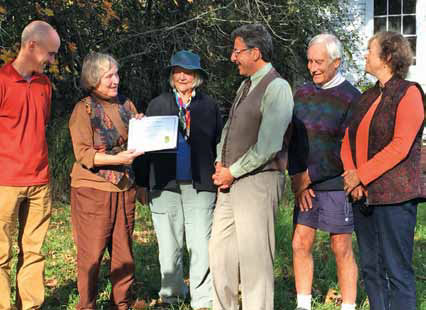 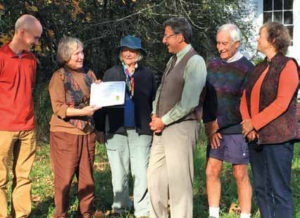 Ken Turino of Historic New England, third from right, presents the Community Preservation Grant to the Root District Game Club’s Jean Lawe. Other Game Club members in the photograph, from left to right: Brian Cook, Suzie Wallis, John Lawe and Courtney Dobyns. The Lawes and Suzie Wallis first became involved with the schoolhouse in the 1960s and have been working to preserve the building ever since.

Ever since Root Schoolhouse, a 1937 one-room schoolhouse located across from Hogwash Farm on Union Village Road at the intersection of Goodrich Four Corners Road, was added to the National Register of Historic Places in 2013, interest in this historic treasure has spread far beyond Norwich. This year, Boston-based Historic New England, the nation’s oldest, largest, and most comprehensive regional heritage organization, gave the Root District Game Club a $1,000 Community Preservation Grant to support its efforts to rebuild the schoolhouse’s deteriorating foundation and reopen the building for public use.

Every year, Historic New England distributes six awards to historic preservation projects in each of the six New England states. The Root District Game Club, the caretaker and owner of the schoolhouse since 1952 when the building started being used as a community center, is honored to be this year’s lone award recipient for Vermont. In October, Historic New England’s Ken Turino visited with members of the Game Club at the schoolhouse and presented the award to Jean Lawe. Jean, like fellow Game Club officers Suzie Wallis and John Lawe, has been working to preserve the schoolhouse since the 1960s. All three remain an integral part of the current effort to save the building and hope to see their work completed in 2017.

Concerns about the deteriorating foundation of Root Schoolhouse are nearly as old as the building itself. In a letter dated November 12, 1975, the officers of the Game Club reported to its members, “We have come a long way this year. This time last year we estimated that we would need over $1000 to pay for materials for restoration of the Clubhouse alone. Thanks to some very generous gifts of money, and much time and labor by many people, including some non-members, the work on the foundations has been completed.” Jean Lawe was one of the officers who signed this letter.

That project, according to a January 17, 1975 story by the Granite State Gazette entitled “Goodrich Schoolhouse Project Restoring Neighborliness Too” led to a “social renaissance” in the Goodrich Four Corners neighborhood. In that article, Game Club co-president Robert Ladd reports being surprised by the terrific response to the “save-the-schoolhouse” appeal: “We think it’s kind of beneficial to the community to keep a place which can be used for a variety of purposes…. Years ago, people used to use their community churches and schoolhouses, and maybe they’re coming back to it. Maybe people are more interested in staying closer to home.” 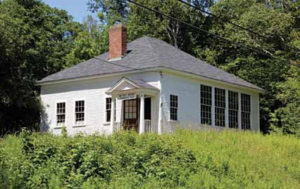 Today, the unstable foundation is again threatening the future of the schoolhouse. As it did in 1975, the Game Club is working to save the schoolhouse and return it to public use for the first time since 2011, and once again can gratefully report, “we have come a long way this year.” In 2016, the Game Club received “very generous gifts of money” from many friends as well as grants from Mascoma Savings Bank, the Norwich Women’s Club, and the Country School Association of America. To date, the Game Club has raised over $35,000 towards this effort, and is now working to raise another $5,000 by the end of 2016 so that it can claim the full $40,000 matching pledge from the Jack and Dorothy Byrne Foundation. This should allow the Game Club to completely rebuild the foundation, at last finishing the work started over forty years ago, and have the schoolhouse ready for limited use before the end of 2017. 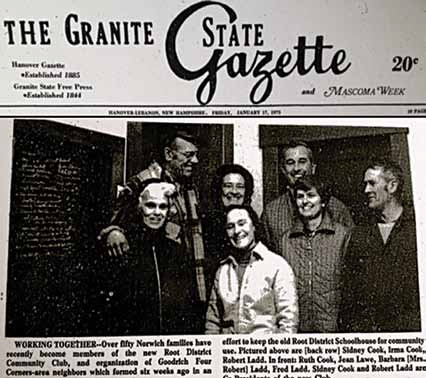 Root District Game Club supporters from 1975, the last time major work on the schoolhouse’s foundation was performed, in a photograph first published by the Granite State Gazette that year. Pictured in the back row (from left to right) are Sidney Cook, Irma Cook, Robert Ladd; in the front row are Ruth Cook, Jean Lawe, Barbara Ladd, and Fred Ladd. Jean Lawe remains active with the Game Club today.

If you are interested in supporting the effort to save and reopen Root Schoolhouse, you can find information about donating on the Game Club’s website: www.rootschoolhouse.com. (The Game Club is a 501(c)3 nonprofit organization.) You can also support the schoolhouse by purchasing a DVD of the 2015 Historic New England/CATV documentary “Back to School: Lessons from Norwich’s One-Room Schoolhouses” at Dan & Whit’s. This DVD was made possible thanks to a Community Projects Grant from the Norwich Women’s Club.

by Brian Cook
If you have any questions or suggestions, please do not hesitate to contact the Game Club at (802) 331-0677 or at rootschoolhouse@gmail.com.
Share: