Reflections on the Women’s March 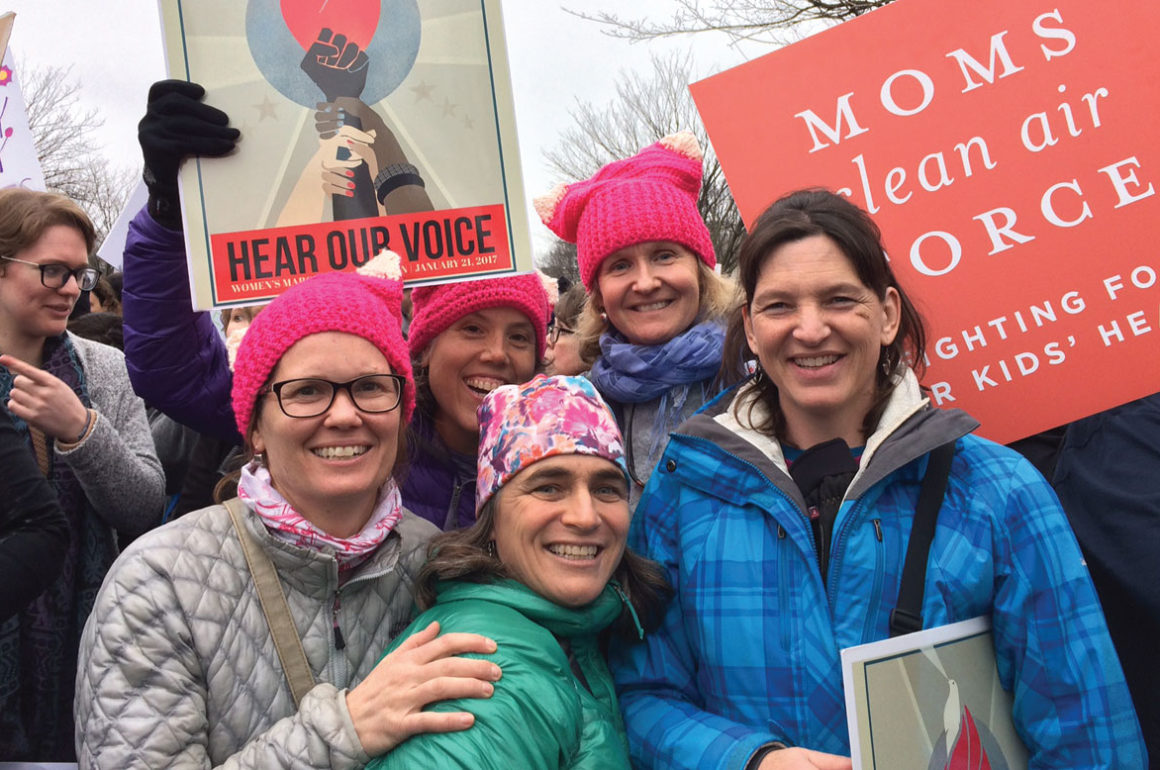 Publisher’s Note: The Norwich Times’ mission is to uplift, inspire and build positive community through the printed page. We do not publish anything pertaining to national or even local politics or any other sensationalist or potentially divisive content.

While running this article, seemingly about the Women’s March, could be construed as political, my intention is not about politics at all. What inspired me to walk this fine line, and to tell the stories of local people who attended one March or another, was the overwhelming takeaway for each was peace and love. No matter which side of an issue one is on, it’s hard not to agree that peace and love are common values among all humans.

When reaching out to some of the women whom we knew had attended, we specifically asked them to focus on the inspiring stories and positive feelings they felt during the whole experience outside their political views. While some of their agendas are embedded in their stories, our intention is not to promote their viewpoints, but rather to let their voices speak to the power they felt by taking action for something in which they believe strongly, and in the overall uplifting and inspiring experiences they each had. 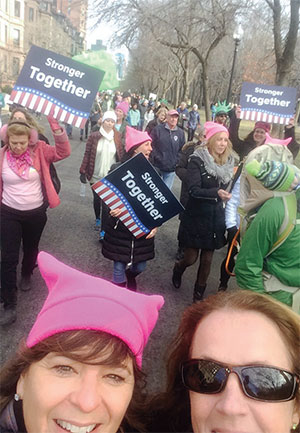 I knew from the time the March in DC was announced that I had to participate. I needed to do something. I worried that I couldn’t get to DC, and was delighted when Marches were announced for other cities; I knew then that I would go, I didn’t know where, but I knew I had to be at one. When I read that Elizabeth Warren would speak at the Boston rally, I was hopeful to go there. Being a displaced New York suburbanite, I was lucky my friend Allegra Lubrano (of Hanover, NH) who knows Boston, also wished to go. We were very glad to be there early to witness the ease at which everything unfolded that day. People simply flowed into the city all morning; they kept coming and coming. There were no bullhorns or sirens, no need for direction. Everyone was polite, cheerful, supportive, and to our pleasant surprise, there were no counter protestors, just one lone elderly man standing on a street corner with a sign and a ‘you know what’ hat. There were women and men of all ages, carrying children of all ages. It was wonderful to see every generation, gender, color, and culture represented. The synergy was palpable; you truly could feel the power of the people. We were lucky enough to be standing in the right spot when Elizabeth Warren’s car entered the Boston Commons. She rolled down her window and I reached out to shake her hand, she took it. I said “thank you,” to which she replied, “No, thank you!” Her speech brought roars from the already energized crowd and that heightened the preexisting feeling of unity and pride. The Mayor of Boston, Marty Walsh, spoke next and although it didn’t seem possible, he was even more spirited than Senator Warren. The crowd was ebullient, yet at the same time, the moment and the occasion itself, was bittersweet. As happy as I was to be there, I was filled with conflicting feelings. That we, in 2017, have to rally and prepare to defend the reproductive rights and equality for women is truly astonishing to me. That we are still fighting for equality, for women, people of color, immigrants, and the LGBTQ community makes me very sad. I saw so many women who were there rallying for the same causes they had spent their youth rallying for. 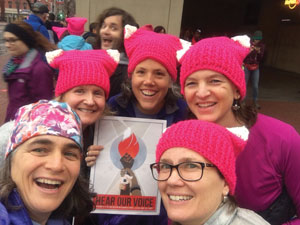 When our friend, Norwich resident, Kristin Brown booked rooms right after the Women’s March was announced, our plans for a road trip were set alight. Elizabeth Keene of Springfield, NH, Laurie Harrington of Walpole, NH, and Andrea Johnstone of Plainfield, NH (three Hanover High School guidance counselors), Kristin, and I started our drive at Laurie’s on a Friday afternoon.

Unified to step up to a whole new level of activism was sparked by the fact that we felt our country had hit rock bottom. Laurie explained her motivation to join the March, “Activist is not a word I would have ever used for myself. I went to DC to show solidarity…and to show that our country values compassion and tolerance over isolationism and fear.”

We felt the unity expanding beyond our group every time someone honked or waved in response to the “HEAR OUR VOICE” sign taped to the back of our car. Five educators driving for eleven hours provided ample opportunity to catch up on our families and work, as well as discuss how the changes in laws and policies would impact marginalized people in the country. We did acknowledge our own privilege to be able to make the trip and stand together for issues important to us. 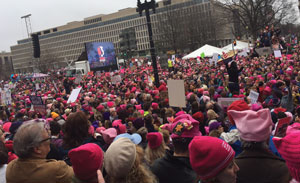 From the moment we entered the crowded subway in the morning, until we were walking away from the dispersing march, we were overwhelmed by the positive energy, warmth, and openness of all the participants. We were bolstered throughout the day by the meaningful (and hilarious) signs, the powerful speeches, and being surrounded by wildly interesting people. By the time we were getting off the subway, we knew that change and hope would prevail if we could avoid divisive anger. When we saw the news of marches around the world, it was clear that the revolution had begun. 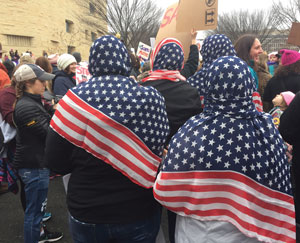 Elizabeth described what inspired her to carry on with activism, “The March was inspiring and powerful, but what stood out for me the most was a renewed hope. It felt good to be doing something and being around the hundreds of thousands of people who were all there for a similar cause – a shared concern that our country might go backward.”

Laurie reminded us that showing up isn’t enough and that we need to respond to the call for action by the inspirational speakers like Gloria Steinem, Scarlett Johansson, Michael Moore, and the organizers of the March. Laurie has committed to make letter-writing, phone calls to her representatives, and finding ways to be involved in local politics a regular part of her life. “We all need to be activists now!”

As we got closer to home, Kristin reflected, “The March experience was like an ocean. We were a wave that crashed into DC. Our journey home was the wave retreating but with renewed energy and life picked up along the way, which will energize us through these next four years.” 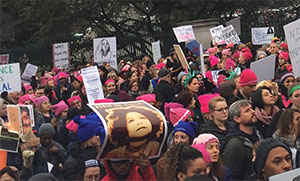 Thinking of friends around the world, I booked one of the very last seats on a round-trip overnight bus from Lebanon, NH to DC. Ten pm departure, 9am arrival. Eight pm departure, 7am arrival.

I took to the streets wearing my hand-knit pussyhat to stand united with the people. To protect each other; locally and globally.

I was raised to identify with the “oppressed,” not the “oppressor,” to question authority and especially the patriarchy.

I have had the privilege of single sex education, choice, and travel. I have walked the desert of Palmyra, seen check-out lines on American Indian Reservations, explored the halls of yadvashem, looked through the bars on Robben Island, stood in Tiananmen Square, seen the spinning wheel in India, and was arrested protesting “the first Gulf War.” To live is to witness, to question, and participate.

On January 21st, there was no other choice for me but to “represent,” set an example for our children, and question today’s leadership in America.

As history shows us, the people united will never be defeated.