Pulling Together for the Legion: An amazing two-day transformation, and the people who made it happen 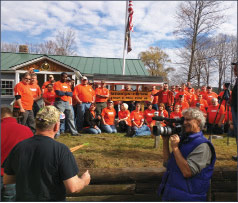 If you need evidence that community spirit is alive and well here in Norwich, check out the Lyman F. Pell American Legion Post 8 on Beaver Meadow Road. Last November, courtesy of countless local volunteers and notably, Home Depot, the building got some badly needed major renovations.

Now that the sawdust has settled, it seems like a different building. Prior to the work, inside walls were painted cement blocks without insulation. Lighting was dim and wiring was not up to code. The porch wobbled. The front door was on its last legs. Old bathrooms were not handicapped accessible. The old kitchen had a tiny sink. Unpaved walkways could be treacherous, especially in winter. You get the idea.

All this had been a thorn in the side of Legion members for a long time. Work would be done piecemeal, but it was clear that a major effort was needed. But how?

Then one day in the fall of 2014, Bob and Betty Armstrong, with the blessing of past commander Jim Harlow, went up to a worker at Home Depot in West Lebanon, N.H., and asked if perhaps the store could help with some small projects. They got talking, and over the next few months, ideas percolated and grew. Home Depot’s Rick Thibodeau worked closely with Bob and Betty as the project expanded, and there were several weeks of planning, site preparation and staging of materials.

Then it was D-Day. Truth be told, it did look like an invasion. For two long days, legions of workers (nobody got an accurate count because the number changed all the time) attacked the job.

Home Depot made this a district project, and sent about 60 workers from ten stores, all volunteering without extra pay. They brought the necessary tools with them and the retailer even gave the Legion a $9,500 grant for supplies.

Legion members and others in the community worked side-by-side with the Home Depot Team and several local contractors who donated time and materials. Tom Slater, a Legionnaire and area carpenter, was the team leader for the interior renovations and did much of the finish work.

Both Tom and Lyle also spent a good deal of time completing the “punch list” items which always need to be accomplished to bring a project to a successful conclusion. The two-day transformation was amazing. “The look and feel is so much more hospitable to all who enter the building,” says Legion member Richard Neugass. “People who come to the Thursday night cribbage games talk about how much brighter it is, and how the main meeting room seems bigger.” Neugass singles out Post Commander Lyle Favreau for “putting a ton of effort and physical labor into the project,” and Lyle gives complete credit to Bob and Betty Armstrong for overseeing the renovations.

Open to the Community


The renovations allow the Legion to open up the building more often to the public for personal and community events. They are asking for only a small donation to cover expenses. Kitchen upgrades include new appliances, new sink, and larger counter space to allow easier preparation and delivery of food.

A new storage shed frees up space inside the building, which was cramped with supplies and materials that were necessary but used only sporadically. A grant from Dr. Peter Batson, a Legion member who died in 2014, funded the shed project, which was supervised by Commander Lyle.

Remember all the problems with the building we listed above? All fixed. New front door, repaired porch, walkway with pavers  –  the whole nine yards. (You can ask most any Legion member about the origin of that expression.) Says one observer, “It was so beautiful seeing everyone pulling together on this. There can be a lot of infighting in Norwich sometimes, but one thing is clear  –  we can still work together.”