Premiering in June: Back to School Lessons from Norwich’s One-room Schoolhouses 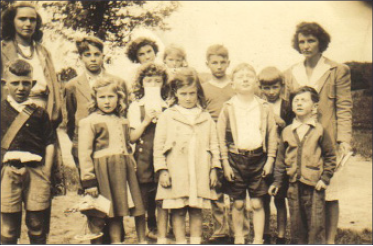 Over two years in the making, “Back to School: Lessons from Norwich’s One-room Schoolhouses” will have its long-awaited premiere this month, with a screening at Wilder Center on Sunday, June 28 at 7:00, and another screening at Marion Cross School in the multipurpose room on Tuesday, June 30 at 7:00.  The screenings will benefit Root Schoolhouse and Beaver Meadow Schoolhouse, with a suggested donation of $10 for adults, $5 for children, and $20 for families.

In the winter of 2013, Boston-based Historic New England, the nation’s oldest, largest, and most comprehensive regional heritage organization, and CATV, the Upper Valley’s local community cable television studio, agreed to make a documentary about the history of Norwich’s one-room schoolhouses.  The groups’ previous project, “Connecting the Threads,” a documentary about AVA Gallery’s history as the H.W. Carter and Sons factory, had been well-received, and they were eager to now tell a Vermont story about great buildings and their transformations, weaving together interviews and historic photos.  CATV director Bob Franzoni suggested Norwich’s schoolhouses, with a focus on the surviving two that were at the time on the cover of Norwich’s town report and would soon be added to the National Register of Historic Places: Beaver Meadow and Root. Over the next two years, ten students who attended Norwich one-room schoolhouses in the 1930s and 1940s were interviewed, along with local experts on one-room schoolhouses, and dozens of historic photos provided by the Norwich Historical Society were identified for use in the documentary. 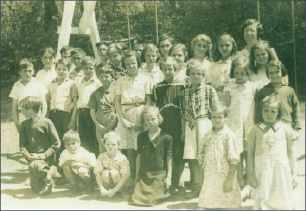 Stanley Wallace at Beaver Meadow School, second row, fourth from left, next to the frowning girl.

Excitement within Historic New England about this project grew, so much so that a photo of Root Schoolhouse graced the cover of the winter 2014-15 edition of its membership magazine, the first time a Vermont building had ever been Historic New England’s cover story.  In that article, Ken Turino, the documentary’s director and Historic New England’s Manager of Community Engagement and Exhibitions, writes, “Why do one-room schoolhouses resonate with people today?  Do they remind us of a more rural America with strong local communities?  Is it nostalgia for a simpler, slower pace of life?”

Excitement within Norwich grew as well.  In February 2014, Dan & Whit’s and the Norwich Inn hosted a wine-tasting fundraiser in support of the documentary.  In the fall of 2014, a crowd-source fundraising campaign to help complete the documentary resulted in 38 contributors donating anywhere from $25 to $50; some of these donations came from outside of the Upper Valley.  Thanks to the community’s support, the documentary will include a remarkable soundtrack of original string quartet music composed by Travis Ramsey, the music teacher at Marion Cross School; performed by instructors at the Upper Valley Music Center under the leadership of its director, Ben Van Vliet; and recorded live by Spencer Lewis within the walls of Beaver Meadow Schoolhouse.  The composition is called “Marion’s Morning,” in honor of Marion Cross, a former Union Village one-room schoolhouse teacher who later moved on to the school in the heart of Norwich village. 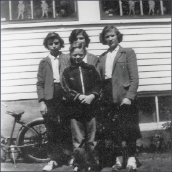 The completion of the documentary comes at a time when the community’s interest in preserving the schoolhouses is at its peak, no doubt in part due the schoolhouses’ addition to the National Register of Historic Places in the summer of 2013, made possible by the efforts of the Norwich Historic Preservation Commission. Shortly after this designation, Beaver Meadow Schoolhouse launched a major fundraising campaign to re-establish the septic system, plumbing and bathroom and upgrade other areas.  Significant progress has been made thanks to generous grants from the Vermont Arts Council, the Byrne Foundation, Mascoma Savings Bank, Ledyard National Bank, the Norwich Women’s Club, the Norwich Lion’s Club, and Beaver Meadow Chapel Association, and in-kind donations from contractors including Pathways Consulting, Wanner Earthmoving and others.  Many individual donors have contributed and fund raising continues with Beaver Meadow’s annual cocoa mulch sale, concerts and other efforts.  Upcoming improvement plans include building and attached shed repairs, wheelchair accessibility and electrical upgrades.

Meanwhile, the Root District Game Club, which became a 501(c)3 nonprofit last summer, has initiated an $80,000 capital campaign to rebuild its deteriorated foundation, which forced the building’s closing in 2011. In 2014, it received a major boost with a $40,000 matching pledge from the Byrne Foundation, and has also received support from the Norwich Women’s Club, the Norwich Lion’s Club, Vermont Community Foundation, Preservation Trust of Vermont, in-kind donations from Smith & Vansant and Pathways Consulting, and several individual contributions. The Game Club’s campaign still has a long way to go, but they are optimistic that the documentary could help generate the additional financial support it needs.

More important than all of these possibilities, the documentary is already a success because it has given an opportunity for ten people who attended Norwich’s one-room schoolhouses to share their stories.  Historic New England’s Ken Turino says, “Norwich’s one-room schools are now part of the past, but these stories are just as important to the town’s history as the structures themselves.” 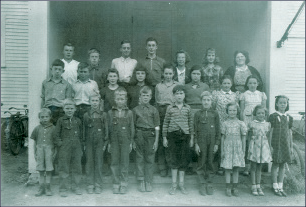 Thanks to Dale Somerville, Stanley Teeter, and Jacquie Teeter-Durkee, we will remember Turnpike School, even though it burned down decades ago.  Thanks to Alfred DeVaux and Alma Gray, we will also remember “Pompy,” the Pompanoosuc School, which was long ago converted to a single-family home.  These schools may not have been preserved, but memories of them will be.

Thanks to Stanley Wallace, we will know Beaver Meadow Schoolhouse even better than before for its historic role in Norwich education, as well as for its current and future role as a vibrant gathering place in the Beaver Meadow community.

And thanks to Rockcey Ruby, Dan & Fred Smith, and Helen Smith, we will remember the Root School.

For the members of the Root District Game Club, for the many families who have used the schoolhouse as a community center from 1952 until its reluctant closing, and the current residents of the community surrounding this building, one important measure of the documentary’s impact will be a simple one: did it help save the building? The documentary alone cannot rebuild Root Schoolhouse’s deteriorating foundation and return it to public use.  Hopefully, those who are moved by “Back to School” will respond by supporting the preservation of the building itself, along with its memories.

If you would like to attend a screening of “Back to School,” please contact us at (802) 331-0677, or send an email to rootschoolhouse@gmail.com.