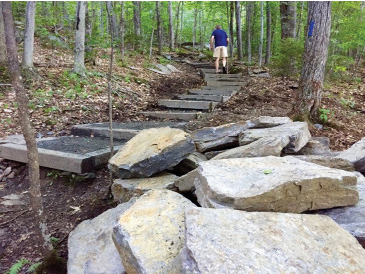 The first thing I noticed upon arriving was the number of cars parked in the small lot, most of which with license plates other than NH and VT. Mid week, late in the day (but not sunset), late August, I did not expect this many fellow hikers, even on a near perfect late afternoon.

I should not have been surprised, however. Russ Hirschler, executive director of the Upper Valley Trails Alliance, told me “Gile Mountain gets between 5,000 and 10,000 visitors a year,” making it one of the Upper Valley’s most popular hiking areas. 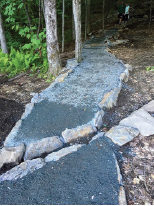 The first section of the trail is the same as I remember from my last hike on it – a wide, dirt path with numerous tree roots to dodge. It wasn’t until I passed the clearing along the power lines that the changes came into focus. We passed a pile of hardpack gravel, and then encountered an impressive stack of flat stone for building steps. Terraced steps made from landscape timbers, recently filled with the hardpack, ushered us into the woods.

A little further up the trail, we saw how those large, flat stones were fashioned into steps. They appeared to be laid in a very professional manner, and would look just as good leading up to a beautiful home as part of a residential landscape design. Yet here we were on a trail in the woods. Every so often, the stones were laid in a manner to allow water runoff to pass through without damaging the trail. I counted somewhere around 90 of these impressive stone steps on the short trail, with more stones awaiting installation. “How did they get these stones and gravel up here, by helicopter?” asked my hiking companion.

George Clark, a member of the Norwich Trails Committee, said several methods were used to transport materials for trail building up the trail. “In the past they’ve used horses, Belgians,” said Clark. Other methods for transport are a narrow, mechanized wheelbarrow-like vehicle, and zip lines, which can help move considerable weight, said Clark.

Russ Hirschler said the movement of materials for trail building is a big part of the work on the trail. “We’ve moved hundreds of tons of material on the mountain,” he said. Being a short trail has made the job a bit simpler, said Hirschler. 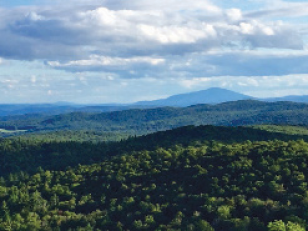 Hirschler said the materials moved to the trail include large, flat stone for steps, crib stone, used to build up the sides of the trail, coarse gravel, and hardpack, both used in creating part of the walkway.

Mechanized vehicles get the material to spots along the power line clearing, said Hirschler, then the material is moved by draft horses pulling a sled, small-scale mechanized wheelbarrows, a zip line grip hoist, which utilizes steel cable, and, of course, volunteers.

Those volunteers have been key to the effort, since the current phase of trail work began in 2011. Hirschler said volunteers from the Upper Valley High School Trail Corps, the Tuck School at Dartmouth, King Arthur Flour, Hypertherm, as well as local volunteers organized by the Norwich Trails Committee have all had a hand in rebuilding the trail. The week we were on the trail, Tuck School students, working on various community projects in the area, were taking their turn trail building.

We weren’t the only ones to notice the high level of maintenance on the trail. We encountered a pair of hikers, returning from the fire tower as we made our way up. Here from Scotland, the couple spent the summer at Dartmouth, and wanted to make the trip to the fire tower before returning to Edinburgh. “The view from the tower is marvelous, and this trail is in great condition,” one of them told us.

Upon reaching the tower, we saw several others making their way to the top to enjoy the view. Between a healthy fear of heights from open platforms, and a leg that does not always function as it should, I decided to not make the trip all the way up, though my companion bounded up the seven flights of stairs to the top. A younger couple, making their way down, noticed my hesitance. The woman said “I don’t like heights, but I felt okay because there is fencing and railing.” I commended her for going up, and wondered if I was the only one hesitant about going up the tower. I doubted it.

Trail building is not the only project that’s taken place on Gile Mountain. George Clark said the tower itself was refurbished about a dozen years back, keeping it safe for visitors. 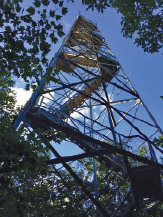 Heading back down, the change of direction gave us a different perspective on the trail work, and the step construction. Curious about the cost of the work, Hirschler told me, “We are on our third grant for work on Gile Mountain.” Grant money received through the Vermont Recreation Trails Program has totaled about $60,000, and with matching funds and in-kind labor, the project is up to about $90,000, said Hirschler.

There is still more work planned for the trail. “We’re a couple years away from having everything done,” said Hirschler. “It’s pretty technical work, and slow and steady wins the race.”