Norwich Kids Change the World One Circus Trick at a Time 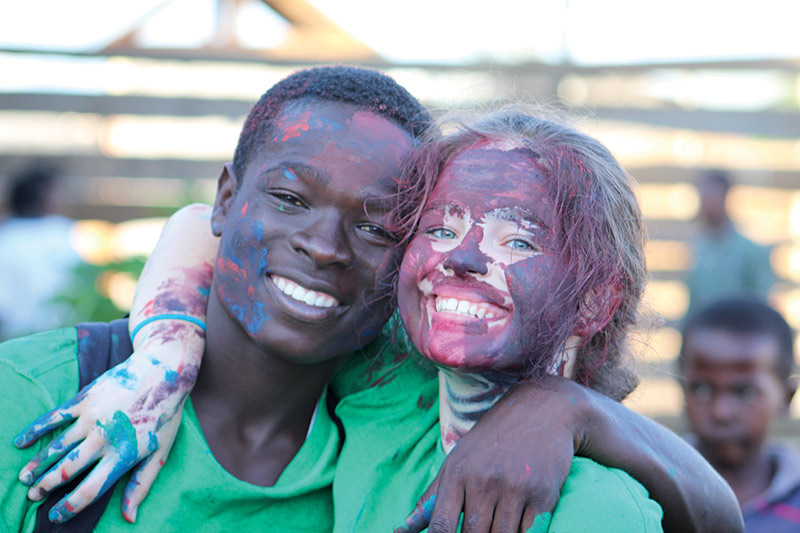 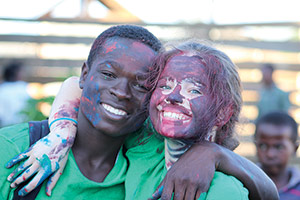 Patrick Chikoloma with Lydia Duncan from Norwich painting a mural (and a bit of body painting!) in Chibolya,
Lusaka, Zambia

Over February break, twenty American kids, mostly from the Upper Valley, will spend two weeks in Zambia, developing their circus skills alongside kids from Chibolya, an impoverished section of the Zambian capital of Lukhasa. For many of the kids from the U.S., this will be a return trip after their first journey there last winter.

The seeds were sown for this unlikely pairing of circus-loving kids from far ends of the earth during a snowstorm in New York City on Valentine’s Day of 2014. Norwich resident Brooke Ciardelli, who had recently ended her tenure as Founding Producing and Artistic Director of Northern Stage, was directing for a short play festival in Greenwich Village. When she ducked into a bar to get out of the snow, she bumped into an old friend Manual Bagorro, director of the Harare International Festival of the Arts (HIFA). She had met him back in 2008 when she brought a one-man show originally produced at Northern Stage to HIFA. Over drinks, Bagorro invited her to write and direct the Opening Show for the upcoming festival, which – with 185 artists from 35 countries – is the largest arts festival in sub-Saharan Africa. “I’d just gone freelance with no plan so I was in ‘yes’ mode,” says Ciardelli. Within weeks she headed to Zimbabwe. 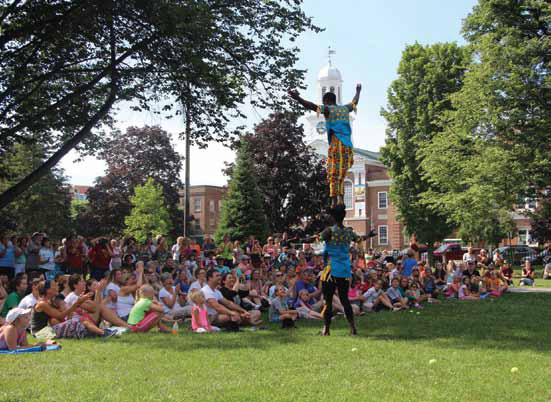 While there, she hit it off with a group of performers from a theater group from Zambia called Barefeet Theatre (including three founding members of what is now Circus Zambia). The founder of Barefeet invited Ciardelli to write and direct a theater production in the fall of 2014, and so she returned.

In the few years since that first visit to Africa, Ciardelli’s relationship with Barefeet Theatre and its members has resulted in many enriching collaborations. When Ciardelli learned that Barefeet Theatre had been invited to perform for the UN in June 2014, she brought them to the U.S. a few days early so they could perform on the Norwich Green on the last day of school, visit classes at Marion Cross, and teach a workshop. Ciardelli also produced a Barefeet show off-Broadway, returned to Lusaka, Zambia to write and direct a Barefeeet production, and brought a one-woman show with DC based dancer/choreographer Princess Mhoon to perform in Zambia as part of the Youth Arts Festival. 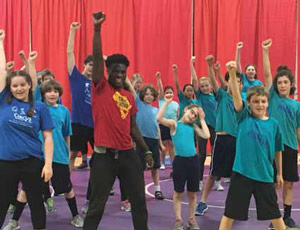 In the fall of 2015, the founders of what is now Circus Zambia shared with Ciardelli their dream of running a social circus school to help the kids who live in their hometown of Chibolya develop the tools they need for a better life. About 80 percent of the population of Chibolya is younger than 14 years old and most don’t stay in school and instead spend their days on the dusty streets surrounded by crime and drugs.

“Zambian kids are terrific acrobats because they just need their body and empty space. There are no playgrounds, there are no toys. They do street acrobatics because you don’t need anything. They would take a bunch of plastic bags and wrap them into a ball. I’ve seen them use a rubber tire as a mini trampoline,” says Ciardelli. 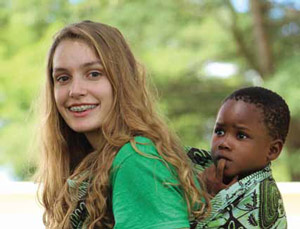 “A social circus school focuses on developing social and life skills rather than the tricks,” she explains. “These kids need to learn to become self-advocates, and that takes courage and trust, and a sense that you can actually change your life. The circus part is a conduit. Maybe a few will end up working as circus people but the circus skills build confidence, self-respect and trust, and the ability to stand up in front of someone and perform, to be a child who is given a voice.”

During this conversation, Ciardelli mentioned that the Upper Valley is home to many children who are passionate about learning circus skills, including her own son, William (now age 13) who had taken Ted Lawrence’s Norwich Rec Department summer circus camp. “I somewhat casually said, “Oh! We’ve got a great youth circus program in our town of Norwich – my son has attended for two years – wouldn’t it be great to do an exchange!?”

So, enlisting the help of Lawrence, who also runs Van Lodostov Family Circus, Ciardelli approached other Norwich circus families about the idea of going to Zambia over February vacation, and was met with great enthusiasm. Before departing, Upper Valley families collected donations and each kid brought school supplies, toiletries and gifts for each of their buddy kids. They also gathered circus equipment to use during the exchange and to help start the circus school in Zambia. 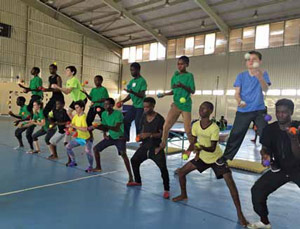 Training at the Olympic Youth Development Center in Lusaka, Zambia

Last February break, seven kids from the Upper Valley between the ages of 12 and 18 and four parents joined Ciardelli and Lawrence on the first circus exchange with Circus Zambia and their youth performers. Together the Americans and Zambians created a joint circus and performed four shows, drawing crowds as large as 1000 people.

The kids became good friends during rehearsal, sharing Zambian lunches, including caterpillar, fish head and emu. “They all ate it. All of them,” says Ciardelli of the American kids. “We thought it was important that the American kids had a sense of where the Zambian kids are from,” says Ciardelli. So they organized trips into Chibolya, including home visits with their buddy’s family.

“I don’t think any of us expected our children to embrace this so fully,” says Ciardelli. “There was no hanging back, no struggle to take in this experience. They just sucked it in. You could see these American kids changing in front of your eyes,” she says.

Signe Taylor of Norwich recalls the night she picked up her daughter Lyla Stettenheim, now 16, and her husband Joel, from the Dartmouth Coach after their trip. “She was both really happy to see me and her brother and also a little withdrawn. As we were driving home, she started speaking about her experiences in Zambia. She talked about how [her father and I] have always said that we are privileged and that we live in a wealthy community and that many others in the country and the world don’t have what we are lucky to have. She talked about how those words didn’t mean that much to her but that getting to know the Circus Zambia performers and kids in Lusaka opened her eyes in a very big and real way to some of the inequalities in this world. I think that’s a huge take away…” Lyla will be returning this year, this time with her mother and her 12-year-old brother Soren, who has attended three sessions of Lawrence’s Camp.

All participants on both sides of the exchange learned and grew from the experience. Before the U.S. kids came, the Circus Zambia kids practiced only sporadically and hadn’t been introduced to clowning, juggling, unicycling, or many other circus tricks. They now have circus equipment and have been gathering two afternoons a week and all day on Saturdays, and their skills have improved immensely, says Ciardelli.

And this past October, Ciardelli traveled to Zambia to help Circus Zambia make an offer on permanent building for the circus school, thanks to funds raised in the Upper Valley. “It’s an old disused school with enough outdoor space to put a small-sized circus tent. It has running water and bathrooms that need love, but that, in Zambian context, are terrific,” says Ciardelli. The hope is that it will be a done deal by February.

Having an actual building will allow more children to attend circus training, ensure that they train in a safe environment, and make it possible to expand the hours of training. In addition to the circus training area, the school will include a computer lab, tutoring facilities and library. The plan is that once a child is in the circus program, scholarships will be available to pay for public school fees, books, uniforms and shoes. At the school, children will have access to safe and sanitary bathroom facilities and clean water, which are not currently available in their own section of the city. The school will also have cooking facilities and internet access. Basic life and social skills such as hygiene, communication and sexual education, will be taught.

Toward the end of last year’s February exchange the parents of the U.S. kids were so overwhelmed by what they saw that they decided to fund a trip to the U.S. for Circus Zambia. Six Zambians between the ages of 18 and 24 spent the summer in the Upper Valley, doing home stays and observing how the Van Lodostov Family Circus Program is run, so they could bring their knowledge back to Zambia. Three days a week, teachers also helped the young Zambians with English, reading, writing and math, and the Circus Zambia performers did shows and workshops around the Upper Valley.

“Another goal was to expose them to as many other professional circus performers as we could, because many of them had never actually seen a circus,” says Ciardelli. (Circus Zambia is the only circus in the country.) They spent a couple overnights with Bread and Puppet, and they did an immersion with Circus Smirkus when they came through. And Cirque du Soleil invited them to be guests to watch them perform on Broadway.

“We had all the performers over on many evenings and those were just very special summer nights,” says Signe Taylor, whose family hosted two Circus Zambia performers last summer. “They cooked Zambian food, joked, sang. The Circus Zambia performers are among the nicest young men I’ve met! They were polite, enthusiastic, eager to learn, kind and helpful. They were also fantastic role models for our son. I got such a kick out of seeing them all on our sofa playing FIFA on our Xbox, shooting hoops, swimming and teasing each other. It was a very fun summer simply because they were here.”

Even some non-circus siblings who helped with reading and writing this summer will be heading to Zambia this winter. “We will run half the programs at the school and half at other places, so the parents and kids not involved in the circus can work on renovating the school, painting, putting doors on hinges building benches and school desks,” says Ciardelli.

“Circus Zambia grabbed my heart and would not let go and I thought maybe some other people would love it but the amount of embrace that has happened from this community is staggering,” says Ciardelli.

“Upper Valley kids are worrying about, ‘how do I find $100 so one of these Zambian kids can go to school for a year?’ They are organizing bake sales and circus clubs and asking for more chores to earn money to purchase building supplies to renovate the school in Chibolya,” says Ciardelli.

“It’s citizenship and true cultural diplomacy at its best,” she adds. “World leaders need to do their part but really the power is in what you are seeing these kids do. These are the values of the Upper Valley, and I’ve not seen it more potently illustrated than with these kids. This is the future.”

by Tamar Schreibman
For more information, to sign up for Feb 2017 Exchange, or to make a donation to the Capital Campaign to build a circus school, contact Brooke@brookeciardelli.com or make checks payable to Circus Zambia, 3 Loveland Road, Norwich, VT 05055. Follow Circus Zambia on facebook at www.facebook.com/circuszambia.
Share: