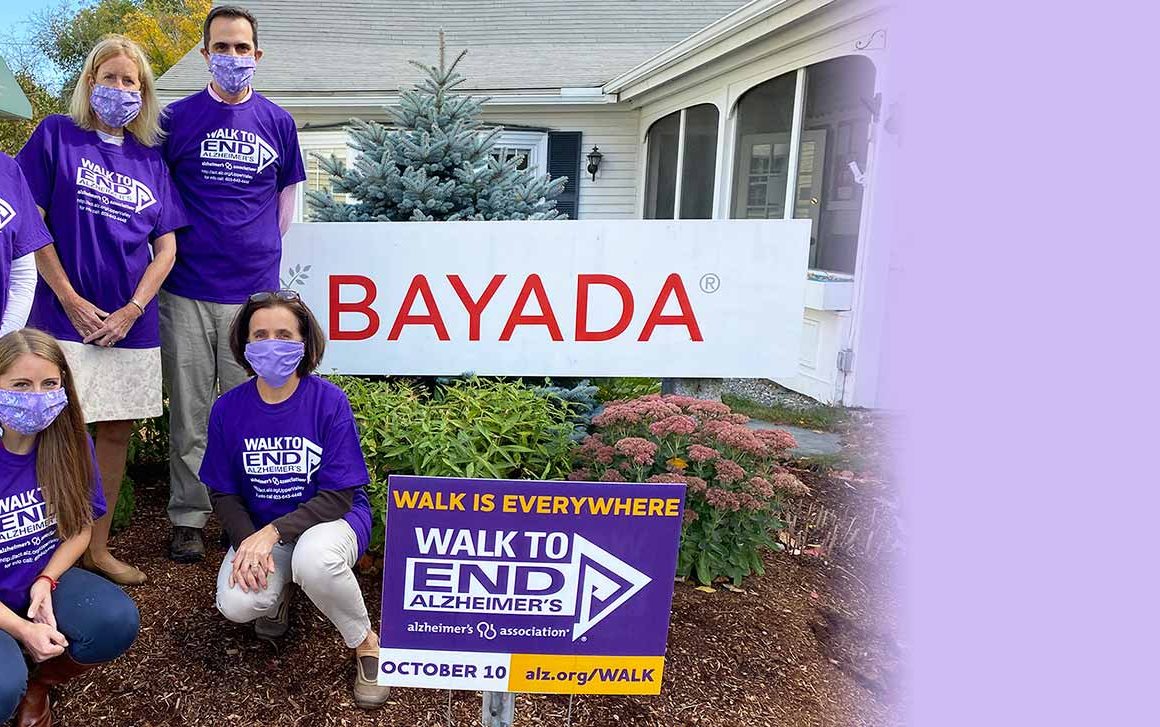 The Walk the End Alzheimer’s, the largest fundraiser for the Alzheimer’s Association, is an annual autumn event in more than 600 communities across the country. This year, on October 2, the Walk is back with teams and individuals walking together in person and in purple.

As the array of colors indicates, Alzheimer’s profoundly affects not only the six million people living with Alzheimer’s in the US, but also their caregivers and extended family. You are never far from someone touched by this disease of cognitive decline. In Vermont alone, 13,000 patients, and their 25,000 unpaid caregivers are living with Alzheimer’s. Norwich residents and businesses are teaming up to raise money, spread awareness and support them.

Laura Fraser got involved with the walk last year by supporting Team Andy in memory of Andy Harvard. Andy suffered from younger-onset Alzheimer’s and passed away in 2019, at age 69, after ten years battling the disease. Fraser’s partner, Pastor Dick Hodge had a close connection with Andy, and Fraser became good friends with Andy’s wife Kathy, a driving force behind Alzheimer’s awareness in the Upper Valley. Fraser enlisted Fairlee Community Church of Christ to sponsor Team Andy. The walk is about raising funds, but also about building awareness. Fraser and Hodge did both.

Hodge delivered a message about Memory and the Alzheimer’s Walk, while Fraser’s Sunday school class had a lesson built around it and made capes for the walk. Fraser works at Diane’s Casual Cuts (Norwich), which is among the many local businesses “going purple” during the week of the walk, with balloons and purple shirts. “It seems to be everywhere,” says Fraser, “so my goal is to get information and education into the community.”

In the heart of the community, Dan & Whit’s has participated in the Alzheimer’s Walk over the past couple years, “going purple” and displaying the event sign in their window. Less visible businesses show their support through sponsorship. “I’ve seen the devastating effect of the disease personally and on caregivers,” says Norwich resident Peter Carter, whose law firm sponsored the walk last year. Carter’s mother-in-law, Susan McClane, suffered from Alzheimer’s and died in 2005, at age 75. He describes seeing an incredibly intelligent, vibrant, engaged person waste away over a few years. McClane, who had been in the N.H. state legislature, was “very up front about her diagnosis,” Carter said. “She wanted people to know she wasn’t stupid. She had a problem.”

McClane’s daughter, U.S. Representative Annie McClane Kuster, chronicled her mother’s decline through regular conversations, and the two co-wrote The Last Dance: Facing Alzheimer’s with Love and Laughter. Carter worries that Alzheimer’s is a ticking time bomb, and feels an urgency to fund more research, which is one reason he and his firm support the cause.

The Alzheimer’s Association funds and drives research toward treatment, prevention and, ultimately, a cure. This research led to the recent release of Aducanumab, the first FDA approved medication to treat the disease. In addition, the Alzheimer’s Association provides advocacy and resources like a free 24/7 Helpline, no-cost education programs (accessible virtually), free care consultations for families facing a diagnosis and more. All of these services are fully funded by the money raised during the Walks and other fundraising events.

For Darcy Bagley, Alzheimer’s is both professional and personal. As the Bereavement Program Coordinator at Bayada Hospice’s Norwich office, she and her coworkers help manage Alzheimer’s patients’ care daily. “We see the illness and also the aftermath with the families,” says Bagley. Bayada also has many staff with personal experience with Alzheimer’s, Bagley among them. All four of her grandparents passed away from Alzheimer’s.

Bayada sponsors the Upper Valley Walk and others across the state and helps with planning and volunteering. Among the volunteers are families of patients. “Families want to stay involved after their loved one passes,” says Bagley.

Each year, one or two patients come out and walk as well, wearing blue, just as Andy Harvard did for as long as he could. The walk is a visual reminder that Alzheimer’s is still out there and that there is much work to do.

“That’s why we wear our purple, and go purple and carry flowers,” says Bagley. “It is just as important that people in the community see us and are aware that we are working to find a cure.” The first person to be cured will carry a white flower.

How to Lend a Hand

This year’s Walk to End Alzheimer’s kicks off Saturday October 2, 9:30 am at Hanover High School. Here are all the ways you can support the community effort:

« Previous post
Montshire Museum of Science Selected to Participate in National Museum Social Impact Study
Next post »
Creating Change through Theater, One Show at a Time