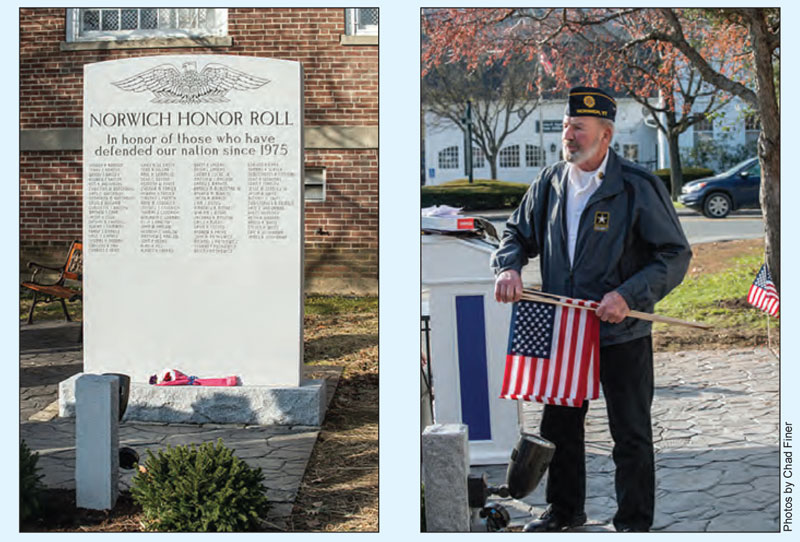 Monuments honoring veterans dot the landscape throughout towns in New England and the nation. From the likenesses of Civil War soldiers standing guard over the town square, to the solemn and emotionally inspiring Vietnam Veterans Memorial in Washington, DC, honoring those who served the nation in the armed forces is a national tradition.

Norwich is no different. For many years, two stone monuments dedicated to veterans stood in town in front of Tracy Hall. One honors those from Norwich who served from the time of the Revolution through the war in Korea. The second honors the Vietnam-era vets. A few years back, the members of American Legion Lyman F. Pell, Post 8 in Norwich decided it was time to recognize Norwich veterans who served in the post-1975 era. 1975, of course, is the year the war in Vietnam ended.

According to current Post Commander Lyle Favreau, former Post Commander Jim Harlow originally came up with the idea for this new monument. In January 2015, Favreau says a committee of five post members formed to plan the new memorial.

Favreau – who has served as post commander for the past three and a half years – says much of the committee’s early work was spent finding the names of residents who served, and determining who would be included on the memorial. The goal was to recognize active and reserve armed forces veterans, including those from the National Guard. Those whose names are on the monument must have received an honorable discharge to be included.

As of early 2018, the post received one bid for the project, with the cost of completion a concern. With a goal of completing the memorial in 2018, Favreau says he and the committee (which includes members Jim McGuire, Gary De Gasta, and Demosthenes Sofronas) began to draw up plans for going forward with the site work, and determining the best placement for the new monument. Favreau contacted Thad Goodwin, the town tree warden and a local contractor. After discussing placement of the stone monument, Goodwin inquired about who would be doing the actual site work. Favreau says Goodwin, an excavator, generously volunteered his time and labor on the project, and added he would inquire of local mason Ernie Parker about doing the cement work on the project. Parker then volunteered his time, as did Strafford resident Tom Root, who handled the electrical work on the project.

As tree warden, Thad Goodwin met with Favreau originally to discuss placement of the monument near an existing tree at the site. Goodwin says when he asked Favreau about the project, “He told me they were over-budget, and weren’t sure how they would complete it.”

Goodwin thought about the project’s importance, and decided to help, offering his excavating services. Goodwin did all the site prep work, including installing the new flagpole, and removing the old tree that was impinging on the site. He also recruited Ernie Parker and Tom Root, both of whom were happy to volunteer their labor, he says. “Ernie Parker was huge,” says Goodwin, not only in doing the cement work at the site, but also offering many ideas about completing the project.

What was the reason Goodwin decided to offer his services, and recruit the other contractors? “I did it for the vets,” he says.

Not only did the local professionals aid the project immensely, Favreau says the town of Norwich was instrumental in helping this come to fruition. “I can’t say enough about the town,” says Favreau. “They were very supportive of the project.”

The project included more than the installation of this new monument.  “We also cleaned and refurbished the old monuments,” says Favreau. As a result of the savings from the labor donated by Goodwin, Parker, and Root, they were able to hire a professional to clean the two existing bronze nameplates on the stone monuments, prepping them for the dedication. Additionally, the existing flagpole was removed, and a new pole installed.

The Rock of Ages quarry in Barre created the new stone monument, honoring the post-Vietnam vets. They delivered the monument to the site, and set it in place. Unlike the other two monuments, the names on this new one are etched into the stone. There are 74 names of Norwich veterans immortalized on the monument, with room to add more in the future.

The new monument was dedicated at a ceremony on November 12. American Legion dignitaries, town officials, and residents attended. “I was told there were about 200 people there,” Favreau says.

Now that the memorial is complete, what are their thoughts about it? “I’m very proud of it,” says Favreau. “It’s very professional.”