March 1, 2015by The Norwich TimesNo CommentsAll, Around Town 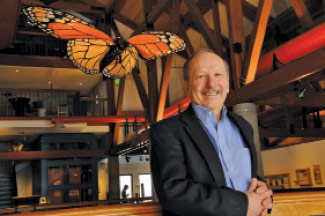 Shortly after being appointed as executive director in 1981, Goudy negotiated the acquisition of 100 acres bordering the Connecticut River in Norwich, Vermont, and in 1989 the Museum moved from the former Golfside Bowling Lanes in Hanover, New Hampshire, to its current location.

He received the first annual New Hampshire Corporate Fund Award for Excellence in Nonprofit Management, and represented Montshire at a White House reception with President Clinton recognizing Montshire as the first recipient of the National Award for Museum Service.

“David Goudy has made the Montshire Museum his life’s work. Over the three decades of his vigorous and enlightened service, his stewardship has made a lasting mark,” remarked Senator Patrick Leahy. “The Montshire Museum is one of Vermont’s great treasures. The Montshire offers exhibits that are both educational and interactive, for children and adults alike. Every time I have visited with Marcelle and, especially, our grandchildren, we have left thrilled and fulfilled.”

Upon announcing his retirement, Goudy said, “I have been immensely privileged to work with superb staff and trustees as well as an engaged, supportive community. No executive director could ask for a more creative environment to support development of a community cultural and educational asset like Montshire.”

“David has provided the Montshire with many years of remarkable service and his lasting legacy is immediately clear to anyone who visits the museum. While we will miss his exemplary leadership, the Board of Trustees is fully committed to maintaining the high standards that he has established for the Montshire’s educational programs, exhibits, facilities and visitor services,” said Norwich resident, Cinny Bensen, Chair of Montshire’s Board of Trustees.