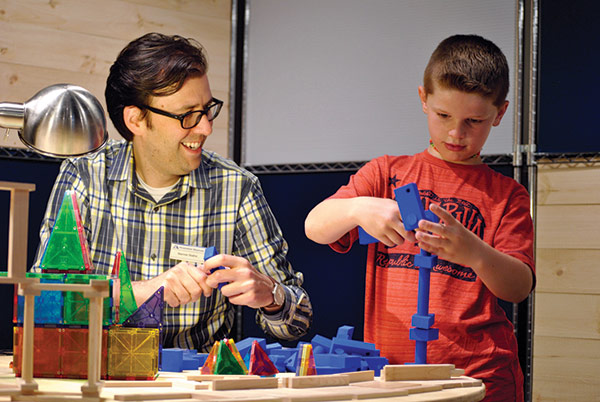 Looking Ahead Through the Rear View Mirror 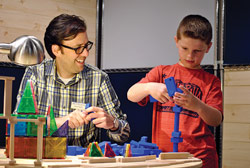 Grandchildren were my original passports to Norwich’s Montshire Museum of Science. Starting as toddlers with Andy’s Place, the Bubbles exhibit, Science Park, and then a few summers in the Museum’s outstanding camp program, all three of these kids not only had a great time but also developed a sense of curiosity and engagement with science that continues today. In fact for my granddaughter, Eliza, now 15, the Montshire was, without a doubt, an inspiration in her choice to enroll in a residential semester program in Freeport, Maine, where a primary goal is to support and enhance the education of young women in the sciences.

Naturally, my grandchildren’s love of the Montshire ignited mine, and I became active as a volunteer on the Montshire Fund Committee and in various educational pursuits over the years. These connections have led to what I now see as my “grown-up,” ongoing engagement with this wonderful educational, scientific, and outside-the-box-fun resource, right here in town.

I was delighted to have the opportunity one afternoon this past fall to sit down with the Montshire’s new Executive Director, Marcos Stafne, who began work here in April. I wanted to know more about what he believed that he brought to his new job, what stood out about the Museum for him in his early months here, and what his thinking is as he contemplates his role in leading an institution turning 40 on January 10, 2016. 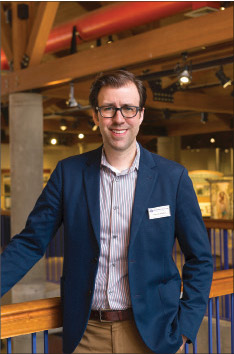 Marcos Stafne’s life history and job experience are very clearly museum based. He grew up in Orlando, Florida, where he spent a lot of kid time as a visitor to the Orlando Science Center and where he worked during college, as a program presenter as well as an actor performing shows about science, both of which, he says, “provided me with a great background for understanding the different ways that one can communicate science. I enjoy taking difficult concepts and making them accessible to folks at various levels.”  Marcos brings expertise from his work at the Orlando Science Center, the New York Hall of Science, the Rubin Museum of Art, and most recently, the Brooklyn Children’s Museum.

How did he get to Vermont?  By car, he states, driving up for the first time from New York during a snowstorm!  Encouraged by various colleagues to put his hat in the ring for the Montshire job when David Goudy’s retirement was imminent, Marcos arrived for an initial interview at the peak of last year’s intense winter. “When I drove toward the Museum from Hanover,”  Marcos says, “I was awestruck by its majestic position along the frozen Connecticut River. The building isn’t ostentatious, but the aesthetics project it as a place of importance,” an observation that Marcos elaborated on as our conversation continued:

“When I entered the building for the first time, I noticed how engaged all the visitors were. The exhibits allow you to bring your imagination to the table. In essence, a visitor plus the exhibit equals the experience. The Museum needs people to activate it; that each visitor experiences the joy of engagement rings true to my own personal connection with science.”

As the new Executive Director, Marcos Stafne succeeds David Goudy, who held the job for 34 years. I was interested in how Marcos contextualizes for himself the connection between the past and the future, in thinking about his role here:  “There’s a reason, according to folk wisdom, that cars have windshields that are bigger than their rear view mirrors.” Going on to explain, Marcos affirms that the Museum was “built on a strong foundation, and my role is to take advantage of what is already working incredibly well, sharpen our focus, and keep the Museum relevant to the community.” Glancing backwards to identify strengths and depths that are synonymous with our identity, he suggests, we use that retrospective view to help sort through the choices ahead and make rock solid decisions.

David Goudy had “real vision,” Marcos commented. With dedicated and highly competent staff members and volunteers, he led the Museum to develop the hands-on opportunities that characterize visitors’ experiences here. He forged strong connections with local institutions like Dartmouth and with more distant pinnacles of the scientific world such as the Association of Science and Technology Centers, the National Institutes of Science, and the Noyce Foundation, whose aim it is to help develop leaders in the areas of math and science. Under David Goudy’s guidance the Museum also established multiple programs designed to deliver good science education to local school children and professional development opportunities to teachers. 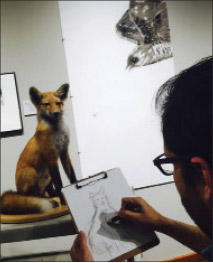 But that’s not all. It was under David Goudy’s leadership that the Museum expanded its footprint; built walking trails; began programming for adults; created the outdoor Science Park, recently renamed in his honor; and dedicated the Hughes Pavilion.

That’s a lot to work with, and Marcos looks forward to a future that will include expanding ties with Dartmouth and the community, exploring opportunities to utilize the Museum’s 110-acre campus, and increasing the educational programming. He also sees additional priorities on the horizon. Already, under the leadership of Jennifer Rickards, Director of Development and Visitor Services, the Montshire offers a “Warm Welcome” program, which provides greater access to the Museum for economically disadvantaged children and families.

Emphasizing a broad sense of inclusiveness will be a definite intention as the Museum looks ahead. “My short term focus has been to get to know the Montshire; listen to what folks have to say about the Upper Valley, Vermont, New Hampshire, New England; and interpret people’s perceptions to ensure that the Montshire is meeting the community’s needs,” says Marcos. On his list of possibilities down the road, he names improving access and opportunities for those with special needs, diversifying adult programming, providing connections for senior citizens, and exploring engaging programs for teens that can strengthen their ties to science in a supportive environment. Marcos envisions a museum that is both a community hub as well as an exciting destination for visitors from far and wide. Expanding partnerships and collaborations is on his radar as an essential pursuit in the years ahead. Community engagement in all aspects of science will be crucial.

As the Montshire Museum of Science celebrates its 40th anniversary, the leadership plans a year full of superb exhibitions, programs, and events beginning January 10 with a community Open House. The thematic mantra will be to cultivate the Joy of Science. 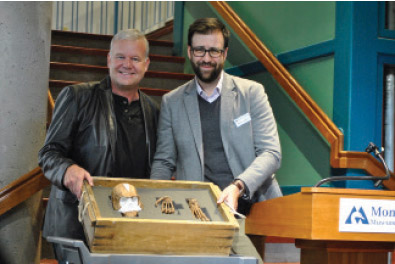 Human Plus: Real Lives + Real Engineering (January 30 – May 8, 2016) is a 2000 square foot interactive exhibit that offers visitors a chance to explore and create a range of low-tech and high-tech tools that extend human abilities.

Prototype Showcase: Making Music: The Science and Art of Instrument Design (May 16 – June 6, 2016) will allow visitors to share their input as the Montshire creates a new exhibition focused on the art and design of musical instruments.

The Tinkering Loft (June 25 – August 28, 2016) will be the Museum’s marquee exhibition for summer 2016. Based on the Montshire’s work piloting activities in the Tinkering Lab over the past 18 months, The Tinkering Loft will provide an extended environment to engage all visitors in tinkering, designing, and building.

And dinosaurs will be back next fall when the Montshire hosts Dinosaur Revolution. (September 24, 2016–January 1, 2016)

Please join me in wishing Norwich’s Montshire Museum of Science a very happy birthday, and also in welcoming Marcos Stafne as the new Executive Director of this

very impressive institution. As the Museum builds on its past and looks toward its future, may the goal of experiencing the joy of science lead to an even more vibrant and inspirational 40 years ahead, on all fronts!