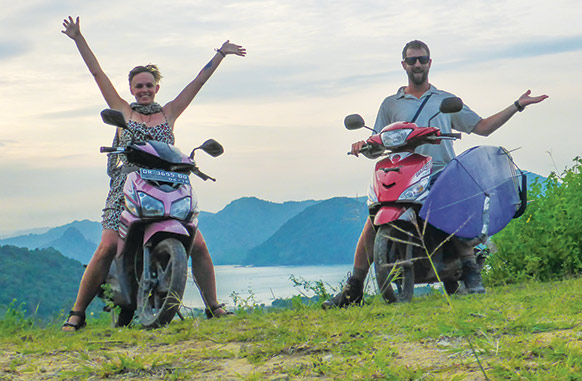 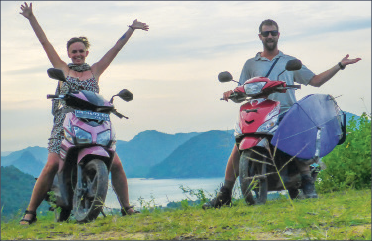 For Scott Miller, the world is full of stories from many cultures, waiting to be told.  And he thinks that by sharing them, the world has a chance of becoming a better place.

“It started on a study abroad to Spain when I was in college,” Scott explains.  “While on the Iberian Peninsula I kept noticing the architecture, the mingling of influences.  In Cordoba I saw the La Mezquita Cathedral which was used by Muslims, Jews and Catholics – multiple faiths worshipping in different ways – in different sections of the same building, each section adorned with details from the others’ traditions.  I found it amazing.”

He noticed that this melding of influences extended to textiles, iron work, tile, and agricultural practices.  “Crops brought from the Middle East – lemons, limes, almonds, oranges, date palms”, he explains, “all originally came to Spain from Arabia. Farming techniques were brought over, too.  The aqueducts built by the Romans are still standing.”

To Scott, these centuries-old elements evidenced the ability of differing ethnicities to live side-by-side and prosper together.  “I came to the conclusion that this peaceful co-existence happened because of leadership.  If the leaders at the time hadn’t seen the value of co-operation, it wouldn’t have been possible.  In fact, diversity is necessary for cultures to flourish.” 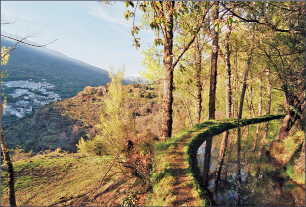 This aqueduct, built in Roman times, modified for agriculture under Arab rule, still brings water from the Alpujarra Mountains onto the arid plains of Iberia where crops such as date palms, citrus and almonds thrive – all crops imported from the middle-east while Iberia was under Arab rule.

Scott himself had a kind of multicultural upbringing.  From the time he was a tiny baby until he was 12-years-old, he spent six months of every year in Norwich and six months in Nairobi, Kenya.  His dad, anthropologist/political scientist Norman Miller, PhD holds a research professor appointment at Dartmouth Medical School and specializes in global heath, the environment and human rights.  As part of Dr. Miller’s work, he took his family with him on his annual research trips to East Africa.

“I was always the new kid,” Scott says of his bi-continental upbringing.  “I had to be friendly and outgoing.  And I learned to make friends quickly.”

Still, he thought of the house in Norwich as home.

“I had everything a kid could ask for,” he says of the family’s house on New Boston Road.  “We had woods all around and a pond in the backyard…  It was my playground.”

Educated concurrently in the Hanover-Norwich schools and in British schools in East Africa (with a dose of home schooling thrown in), the scientist’s son possessed a good measure of on-board curiosity from the get-go.  He did his own kind of field work, right in his Norwich backyard.

“I became a master of catching amphibious creatures,” he says, reminiscing.  “I would put on a mask and snorkel, and go down to the pond to look for turtles.  I’d swim up underneath them, and watch to see what they did.  Sometimes I would catch them and – very, very gently – put them in a bucket for a day or so.  But I always put them back in the pond.  I never killed things.  I was more of a curious gatherer.”

He might not have made the connection himself, but it is clear these two abilities in concert – a knack for adapting quickly to new settings and the practice of close observation without interfering – along with a life-long habit of traveling globally, made Scott particularly well-suited to his chosen profession of photojournalism/ethnography. 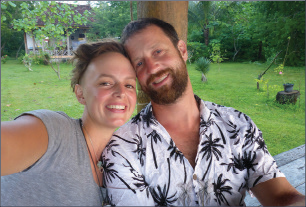 Scott and his new wife and business partner, Lindsay

On that junior year abroad, the larger questions of how people from very different cultures and opposing religious views work together and prosper captured his imagination.

Then 9-11 happened.  Suddenly the notion that people from varying cultures and religions might live together in peace took on a new and urgent relevance.  Soon after, Scott joined forces with Hanover native Wynne Washburn, and together they launched the Regarding Diversity Project.

In the spring of 2004, Miller and Washburn went back to Spain to document evidence of the pluralism that had been the norm centuries earlier.  They photographed buildings with tile roofs, built with a technology harkening back to the Middle East and China.  They captured Spanish citizens practicing Tai-chi in courtyards that were originally modeled on Middle Eastern open-air patios.  They photographed dancers and street-corner protestors, painters and craftsmen.  They found evidence of cultural medley everywhere they looked and learned a good deal of history in the process. 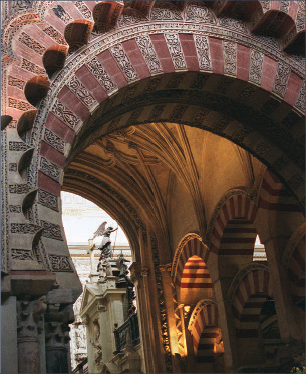 La Mezquita/Cathedral (Mosque/Cathedral) was built in Cordoba under Arab rule, with successive Christian rulers keeping the structure intact while adding a gothic cathedral in the middle. The structure remains a site of pilgrimage for both muslims and christians.

“As the variety of artists styles and ideas grew in medieval Spain, the inspiration for craftsmen, musicians, poets and other artists grew exponentially,” they wrote.  “Jewish poets began to write verses in Hebrew using the structure of Arabic poems as a base.  Musicians from Bagdad were invited to the Court of Cordoba to teach a new form of musical notation – the form we use today.”

During 2005—2006, ten years after the signing of the Dayton Peace Accords, the partners took their cameras to Bosnia-Herzegovina where the former Yugoslavia had been fractured by decades of war.  Communities and family members of different religions and belief systems, who had lived and worked side-by-side for generations, were suddenly forced to choose sides.  Miller and Washburn traveled from town to town by bus to meet local people and get their perspectives on the aftermath.

“We were interested in meeting people, learning about the current situation with regard to religious tolerance and understanding how people view the progress of healing within themselves and their country,” they wrote at the time. “We knew the peace accords had physically re-integrated the population that had lived side-by-side in Yugoslavia for 46 years, but we wondered if integration is really what the people wanted.”

What they found was an institutionalized fear of “the other.” In the new paradigm of post war Bosnia- Herzegovina, separate schools were established for each language or dialect. “There were multiple schools in the same village the size of Norwich or smaller, each teaching a different version of the same history in a different language. And each municipality was making up its own rules for its schools,” Scott explains.

They visited a high school in the city of Mostar which had separate classes and teachers for Bosnians, Croats and Bosiniaks, though these same students interacted with each other in the hallways and at lunch. 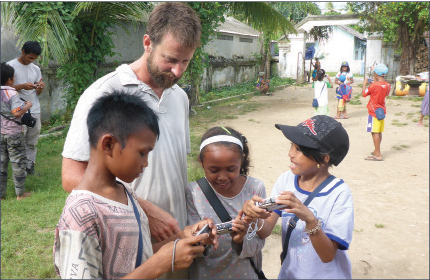 Above and below are photos from a workshop Scott and Lindsay taught earlier this year in the town of Kuta, on the Island of Lombok, Indonesia.

Part III of the Regarding Diversity Project took place in 2006-2007 when they went to India to explore the southwestern state of Kerala where a 5,000-year-old culture had been built on a philosophy of pluralism. Here they explored the harmonious co-existence knitted together by Jews, Muslims, Hindis and Christians. “Our most important finding,” Miller and Washburn wrote, “…was that economic interdependence between religious groups provides an incentive for tolerance.” Muslim fishermen knew that if they fought with their Hindu neighbors as was happening elsewhere in the country during the riots of 1992 and again in 2002, they would lose their customers. “If we riot with the Hindu merchants,” explained the fisherman, “who will buy our fish?”

Eventually, Miller went to graduate school and earned a Masters degree in International Affairs and Ethnographic Studies from the New School in NYC. While in New York, he took part in the Global Video Letters project in the South Bronx. He and others went into the community and, working with NGOs and community activists, taught kids the skills they needed to “tell their own stories about what they see, experience and want to share with the world.” 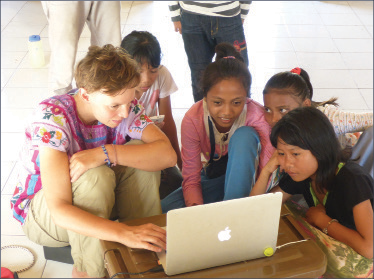 Then in the fall of 2010 and the winter of 2011, Miller completed a documentary film called “Our Global Campus” in St. Johnsbury. He worked with adults with developmental disabilities for six months, teaching them the basics of filmmaking and helping them to complete video projects about their lives. The result is a startlingly personal record of the everyday lives of these Vermonters. They play sports, they socialize, they talk about what they care about, they make plans – all right to the camera, in their own words.

“My approach has always been to ‘capture’ what I see on film. Appreciating what is all around – wanting to participate but not influence,” Scott says about his work. “As a photographer and explorer, my work begins with a question: how can we all live together in peace?”

Lately Scott, along with his wife and business partner Lindsay McClure Miller (they were married this past August) work together on a project called World Story Exchange in which they “…invite all people to observe their place and create documentary art for global exchange.”
Scott and Lindsay travel around the globe, putting cameras in the hands of children, showing them how to use the equipment and then inviting them to make mini-documentaries to tell their own stories or those of their families and friends.

“There are two basic philosophical foundations for my work,” Scott explains. “First, I am interested in using youth-made media to create bridges of communication, and thus foster new understandings and appreciations between participants. These bridges can connect people from different generations, different cultures, different socio-economic groups, and others.

“Secondly, I am interested in fostering active citizens through the creation of documentary artwork. My students are typically assigned some type of community questioning, either making interviews with others or asking students to critically assess the positive, and negative, aspects of their community. Through these acts of on-the-street questioning and engagement, the student is no longer a passive body, no longer a bystander, but is now an active participant in the social order, a citizen, perhaps an activist in the making.”

They have traveled to Vietnam, Brazil, Cambodia, Thailand, Nicaragua, Indonesia, and all over the state of Vermont, teaching children to use still photography, video and audio equipment. Working with the Vermont Folklife Center through its Education Outreach program and “a wide variety of organizations, including K-12 public schools, homeless shelters, teen & parent-child centers, senior centers, public libraries, and organizations for adults with differing abilities,” they have made over 200 short documentaries.

“I continue to be fascinated by humanity,” Scott writes, “I am simultaneously inspired and saddened by our capacity to create and destroy, socially and ecologically, the groups we live among, and the places we share.”