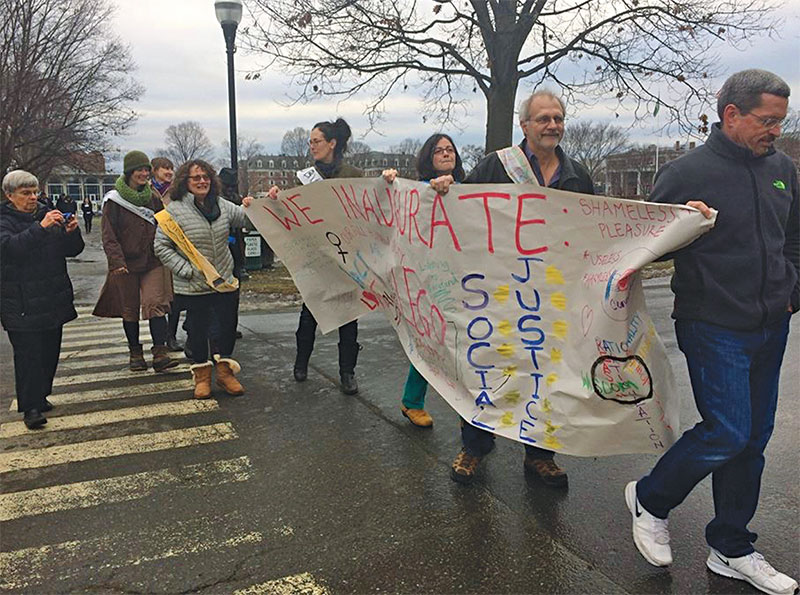 Light the Way announced goals, “on a practical level, every household needs a lamp or two to brighten the home! …Light the Way will collect gently used table and floor lamps to be given to resettling refugee households to brighten the years ahead.” Also, Light the Way was intended to be “a space of refuge to raise community awareness of the needs of those seeking shelter among us: refugee families arriving in Vermont and New Hampshire during the coming year, as well as those families seeking refuge already present in our communities.”

I had the chance to speak to Julie Püttgen, the organizer of Light the Way, about the project and the Upper Valley Refugee Working Group. The Working Group was started, in part, by Paul Manganiello and Our Savior Lutheran Church in Hanover, NH. Julie wasn’t part of the original group, but she joined when she saw a post on the listserv last year.

It’s amazing, she noted, “I’m a Buddhist, I didn’t have much contact previously to being involved with this group, with the local church communities, and it’s been terrific. I feel so glad to be connected to so many people of good will and good faith.” 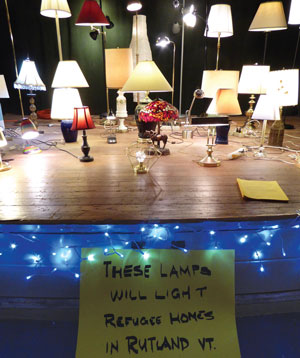 There are members of many different area churches that come; there are Mormons, Jews, secular Atheists, and more. Julie was amazed by this mix of faiths, because, as she pointed out, we are quite good at hunkering down in our immediate worlds, and this group isn’t like that.

For the Light the Way event, one of the members of the Working Group, Sarah Nordstrom, approached her church, The Church of Christ at Dartmouth College, to see if they would be willing to donate their space for the event. And boy were they willing!

Julie said, “I felt like I kept pushing the envelope,” as thoughts grew. Through both her own ideas and suggestions from friends, it evolved from collecting lamps to a whole weekend event. After Friday’s opening events, Saturday was full of panel discussions, tai chi, a protest march, refugee yoga, a community dinner and dance, and Sunday held a closing event. Every time she approached the Church with more plans, they responded positively, further offering up their space.

“I felt like there were opportunities for people to show up to Light the Way with whatever their gifts were… some people donated just beautiful, beautiful things. One guy came in, and his mother-in-law had been a refugee from Czechoslovakia, and she had moved to this area, and she had made this beautiful ceramic lamp base and the lamp had on it this beautiful handmade lampshade.”

For Julie, Light the Way was significant for many reasons. Julie is a first-generation immigrant from Switzerland, and from 1974 to 2006 was a resident alien in this country. For some time, she went abroad and screwed up a bit; she reentered the country on a tourist visa which ended up making her deportable for a period. Julie noted that while she had less to worry about than others, as being sent back to Switzerland wasn’t going to be horrific, but it wasn’t where she wanted to be. She said “I had the tiniest taste of what it felt like to be an illegal immigrant in this country,” and, during that time, she met several families struggling to stay together which made a strong impact on her.

She also spent a good deal of time working with refugees in various countries, struggling to make it out of dangerous situations. “[Recently] I got a message from an Iranian woman I was working with in France last year, and she was writing to tell me that she and her husband had just been officially recognized as asylum seekers in the UK and they went the most scary, dangerous way possible in that they snuck onto a truck. They paid ‘people smugglers’ to take them from Gallés, France to the UK.

When I was there, they were trying every single night to do this, and she was pregnant, and she fell off a truck and had a miscarriage. So, in this really short time that I knew her, I just had this sense of the total desperation of their case, and I couldn’t believe it, they did it, through this completely perilous route, they found refuge.”

But as much as we might hear about those horrible experiences overseas and wonder what we can do, Julie wanted to make sure this event demonstrated that refugee work doesn’t have to be about international events. Refugees are also living among and coming to our community, and there is immediate work to be done.