Life in a Frowsy Village: Student Life at Norwich University 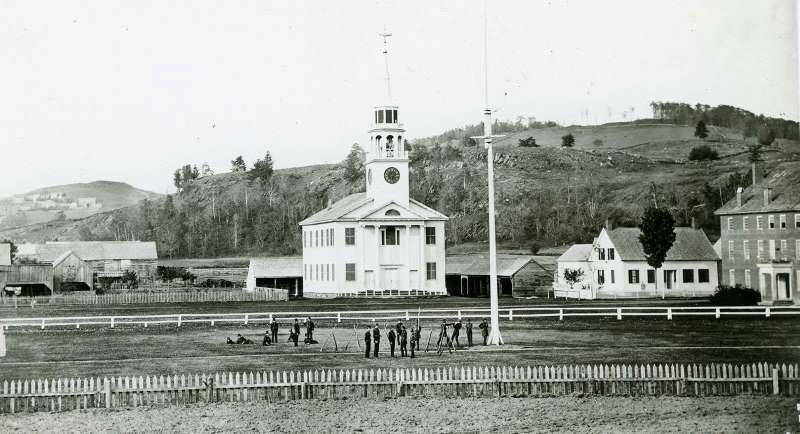 Much has been written about Alden Partridge, who established Norwich University (first known as the American Literary, Scientific, and Military Academy) on the town green in 1819. He was a great leader and an innovative educator. But what was life like for the teenage scholars attending the University who left their homes hundreds of miles away and sought an education in rural Vermont? Where did they live? What did they study? What did they think of Norwich? 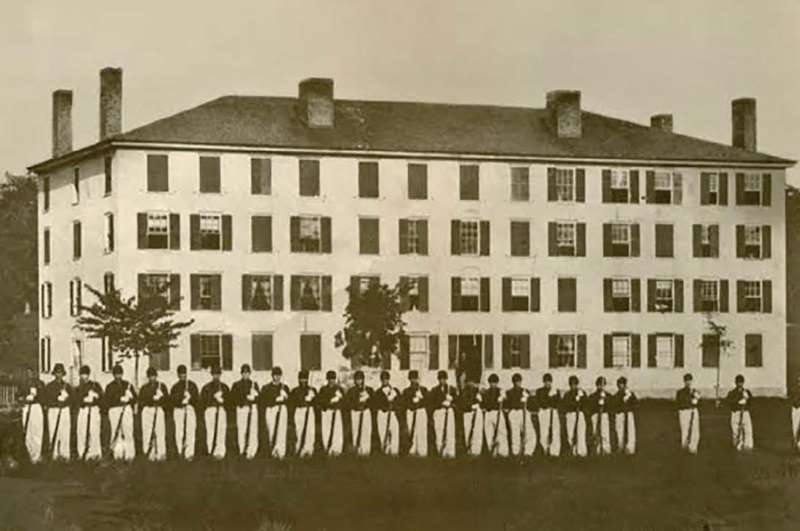 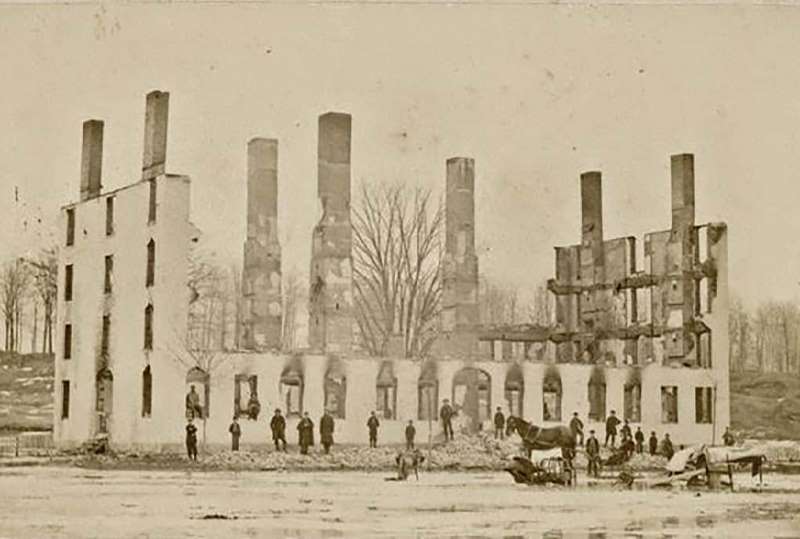 The South Barracks before and after the 1866 fire.

Fortunately, many of the early school catalogs, student letters, and diaries have survived to this day, and from them, it’s not difficult to sketch out the daily life of the students while they studied in Norwich nearly 200 years ago.

“Here I am in the region of snow drifts once more!” Edward Stanley Abbot wrote his mother in late March of 1862 soon after he arrived to begin the spring term. “I got here this afternoon and have established myself to my satisfaction in this frowsy country village… I am to board close to the Academy (“Barracks” they call it here) at Mrs. Dowe’s, a comfortable house and clever people apparently. I am to have a nice large parlor and a snug little sleeping room at the enormous sum of half a dollar a week!”

Once Abbot arranged his housing and meals he began his classes. With Partridge as the superintendent, the cadets were introduced to a “vigorous course of study.” The faculty was a talented one and offered over a dozen courses that included everything from astronomy to civil engineering as well as five foreign languages. In addition, the cadets were “correctly instructed in the elementary school of the soldier…” with a system of discipline that was “strict, but correct.”

Students slept in large barracks that were located on the green. According to the school manual, “The students (were) required to sleep on mattresses, or straw-beds; no featherbeds… allowed…” Cadets boarded (ate their meals) “at respectable and genteel houses in the village.” The quality of the meals varied greatly and the young men were never hesitant to critique the local fare. In 1824 in a letter to his family, John Hancock described his New Year’s day meal. “This day we had a turkey at our boarding house for the first time since I arrived here. It weighed ten-and-a-half pounds and ten boarders soon demolished it and went off complaining of being hungry. For my part, I only had one tuff drumstick – slim dinner for all of us…” By the end of April, young Hancock had moved to another boarding house run by the Emerson family. “I went to dinner for the first time at this place and must acknowledge I did not think there was any house in the village that could produce such good victuals… Warm cakes at breakfast and supper and… the butter, too, must not be passed over without giving it the eulogy it deserves. It is yellow, cut handsome and stamped very handsomely.” 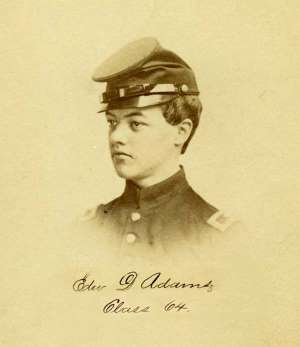 While meals were definitely on the mind of the cadets, a tight military schedule kept them busy. A typical day was outlined by William Davis in 1842. He woke at 5am to the beating of a drum and attended roll call. Breakfast was at 6:30, followed by “prayers and lecture by Capt. Partridge.” Classes ran from 8:30 until the noon meal. At 3pm, “…We were paraded in streets by Adjutant (Partridge)… until 5. He marched us to the Hotel and treated us to a glass of wine. Went upon guard at 1/2 past seven – and staid on until 10. I came into my quarters this evening more fatigued than usual. Studied until nearly 12 and then retired to rest-taking soldier comfort lying upon the hard floor. Quite a luxury…”

But outside of classes and hours of marching, many cadets learned to enjoy what Norwich had to offer. In the winter, the young men skated on the flooded parade ground and some ventured out on the Connecticut River “where there is elegant skating.” The cadets purchased maple syrup from the villagers, others swapped “old pantaloons, coats, etc.” for the syrup. Often winter dances were planned, but due to the fickle weather, many were canceled as was the case in late February of 1824. “This is Washington’s birthday and the cadets contemplated having a ball tomorrow eve… but owing to the freshet and several other disasters, the bridges being carried away and no girls are in place…we shall have to abandon the idea.”

For cadets like Abbot who grew up in Boston, Norwich quickly lost its appeal during mud season. “As for the place itself, Norwich may be best described as an enormous pig sty,” he wrote. “Filth, nothing but filth, all over town owing to the fact that we are thawing out. I stay in the house all the time since it is sheer impossibility to walk the street, and the weather is too cold as yet for me to wear nothing but swimming drawers and paddle round town.” Yet his mood changed, as it does for most Vermonters when spring finally arrived. “I no longer live in a pig sty,” he began in a late May letter. “Norwich is most beautiful, within the last three days, the bare unsightly trees have put on the verdure of the soft spring foliage, the grass and flowers have risen from their graves…”

Once the weather warmed up, skirmishes often erupted between the cadets and the students at Dartmouth College. The ‘Darties’ were not impressed by the marching and uniforms of the Norwich students and often pelted the cadets with eggs when they ventured into Hanover. And the cadets were disdainful of the civilian college across the Connecticut River.

In June of 1839, 100 Dartmouth students in a long column of fours, marched into Norwich and attempted to enter the Norwich University grounds before they returned to Hanover. “Our gate was guarded,” recalled one cadet. “The sticks and canes carried by the invaders proved ineffective in the assault against the bayonets of the guard. The invaders, after a short struggle, broke in retreat and were not pursued. Spoils of the history consisted of cursed silk hats and two or three walking sticks.”

The cadets did not take the “nighttime invasion” lightly and returned the favor a few weeks later by marching in full uniform to the Dartmouth campus. With 150 men, three snare drums, three fifes, and a bugle, they formed one column and “struck out for the land of our enemy, Captain Partridge in command.”

After crossing the bridge, the cadets marched up the hill. Around the green, “the roads and grounds were filled and progress was difficult, and here was where we expected trouble… We would not resent jeers, hisses, or insulting remarks, but drew the line at stones and brickbats. We knew why we had fixed bayonets and why our arms were at carry. We were ready for an emergency – none came… Emerging from the crowd, we marched to the end of the village, then we countermarched and took our way homeward; our band playing Yankee Doodle.”

The hostilities ebbed as the Civil War approached. Students from both schools met and formed political clubs and presidential candidates were jointly supported. At a mixed meeting held in Hanover shortly before the war, a Dartmouth student proclaimed, “We must acknowledge that you are not only our equals in classic and scientific attainments, but our superiors in this, that you can buckle on the sword and lead men in this conflict, while we must shoulder the musket.” 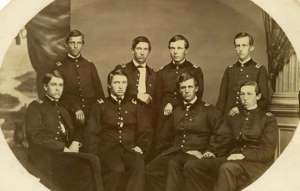 Cadets left Norwich University to fight or help organize state militias once the Civil War began. The entire class of 1862 enlisted upon graduation. By the end of the war, over 600 Norwich alumni served in the Union Army while 40 cadets fought for the Confederacy. One of those who fought for the Union was Edward Abbot, who wrote so eloquently about his experiences in the “frowsy” little village of Norwich. Within weeks of his graduation in the summer of 1862, he became an officer in the Union Army. The next summer, while leading his men near Little Round Top at the battle of Gettysburg, he was shot and died soon afterward from his wounds. He was 22 years old.

The story of cadet life in Norwich came to a close on the evening of March 14, 1866, when a fire broke out in the South Barracks. The cadets scrambled to save the books and furniture and set up a bucket brigade; but the blaze was too powerful and the building was a total loss. Soon after the fire, the University moved to Northfield, Vermont, where the prosperous railway center made a generous offer to help rebuild the military school.

Never again did young cadets march up Main Street to hear Partridge speak from his home or protect the campus from an invasion of Darties. No longer did the citizens of Norwich visit with cadets at the village store, watch them skate on the river, or have them as guests for a New Year’s meal. The University was in Norwich for less than 50 years, but it made an impact. One has to wonder what the town would be like if it had remained.

Drop into Norwich Historical Society this summer to see the exhibit “The Education of Citizen Soldiers: Norwich University turns 200.”

Several of the photos in this article were used courtesy of Norwich University Archives, Northfield, Vermont.

« Previous post
Where Have All the Insects Gone?
Next post »
Demo Sofronas Named Norwich Citizen of the Year