Know Your Town: A 1940 Survey of Norwich 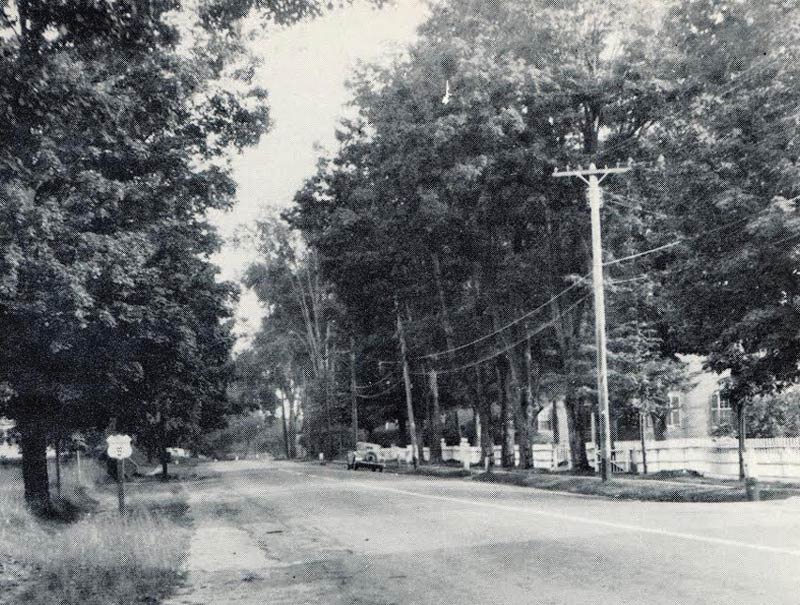 There is a black and white photograph of Norwich’s Main Street in 1940. It’s the view a driver would see heading out of town towards Hanover. Huge maple trees hang out over the road; by the sidewalks the grass is bushy and unmowed and there is only one parked car in sight. What was it like in the village of Norwich that day? In 1940, the Norwich Women’s Club assembled a detailed 103-page booklet entitled Know Your Town, whose purpose was to “evaluate the town’s social assets and liabilities… and to present a picture of contemporary life which shows the changes and trends in the community.” In its twelve chapters, the survey covered everything from community health programs to leisure time activities. 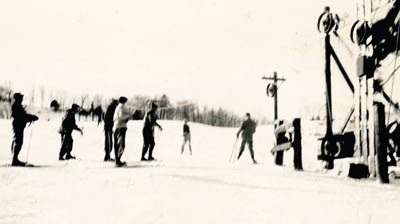 Norwich was 172 years old in 1940, and since the town was founded, its population had always been on the move, explained Carrie Barrett and Margrit Rosenstock-Huessy, surveyors of the town’s population trends. Chief among the emigrants would have been Norwich farmers. “How different the face of the earth must have looked in 1850! Wheatfields, oats, the apple orchards and sheep pastures compared with the monotony of our hayfields and cow pastures. Four-hundred-eighty-one horses (compared with 250 today) and 406 oxen (compared with 40).” In 1850, 376 men in Norwich called themselves farmers. In 1940, only 100 citizens held this occupation. Norwich had also seen its professional citizens move away. According to the 1850 census, there were 31 lawyers, doctors and teachers in Norwich, but by 1940 only 23 professors and instructors lived in the town. “But their center of interest now is mostly on the other side of the river…and they do not take part in the life of the community. Today,” they concluded, “Norwich is on the way from town to suburb.”

In the chapter on Norwich town government, Della Sargent MacAulay wrote “that to know your town is to understand better your state and national affairs.” And what better place to understand a Vermont village than at the town meeting. In 1939 Norwich, with the opening of Tracy Memorial Hall, welcomed a permanent home for community gatherings. It was a dream come true. Before Tracy Hall was constructed, the town meeting had been held in churches, meeting houses, the Norwich University and above Merrill’s Store in the Union Hall. Now the March gathering had a home that also provided a center for the town with a stage, auditorium, gymnasium and a well-equipped kitchen. MacAulay described the highlights of the 1940 town meeting. The town agreed to operate on Daylight Saving Time as Hanover did because, “the difference in time causes confusion especially in border towns.” Another article asked that the town give $100 for the Norwich Band’s free concerts. “Our voters from all over town drive to the village campus, sit in their cars, and relax for an hour on a summer evening, with a nickel bag of popcorn to munch, and enjoy the pleasure of listening to the band concert.” The town also discussed whether $350 should be given to the Norwich Fire District to cover expenses. Although the fire district was primarily responsible for fire protection, it could also “construct sewers and sidewalks and sprinkle and oil streets.” According to MacAulay, citizens discussed a “cooperative sewage disposal.” Hopefully, she wrote, “When action is taken that they will not employ the old unsanitary method of dumping sewage into our brooks to be carried to the river. Probably such practice will, in time, be forbidden by state authorities… and scientific septic tanks and drainage beds be required.” 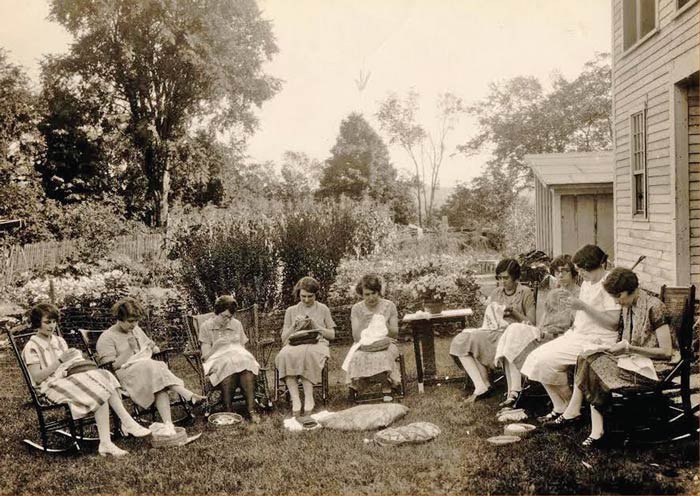 In Our Educational Opportunities, Alberta Jacobson and Hazel Thorburn outlined the status of the Norwich schools. Of the six schools in town, all were rated superior except the Village School, which was rated standard. Fire protection was the main problem at the Village School. Two boilers were just below the main floor and the lowest grades with the smallest children had classes on this floor. If there were a fire there was the only one exit out the main door. “Some have suggested that the windows afford additional exits… but it would be a high jump for tiny tots… and in the panic and confusion of a fire, it is not safe to assume that older people will be on hand to pass these tots safely through the windows.” Mr. Kingsbury, the fire chief, suggested that a window on the ground floor be converted into a door. This he believed, “…would assure adequate protection to the little ones.” 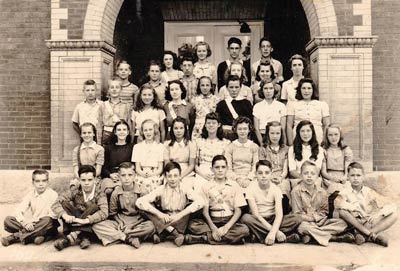 School costs had “skyrocketed” in the years leading up to 1940, when education costs topped out at $18,000 annually – six times what it cost in 1900 – even though the student population remained the same. The cost of living had increased and “teachers’ salaries have gradually increased to $20 a week.” But the real problem was that the state spent “61.8% for highways and only 10% for educational purposes.” To rope in the school taxes, Norwich was gradually consolidating its schools. In 1905, there were thirteen rural schools. In 1940, there were only six.

Much of the survey concerned the town’s health and welfare. It reported that Norwich was blessed with wonderful local doctors who still made house calls. But a trend had started where many of its citizens were going to Mary Hitchcock Hospital when they were ill. For those on welfare, Norwich ‘pledged’ to cover the hospital costs. Citizens who might “be deprived of hospitalization because of lack of funds are accommodated through our ‘free beds,’ made possible by endowments from public-spirited Norwich donors.” The endowments covered between 150 and 175 days of care each year, and these patients were given “regulation ward care plus daily visits by a staff doctor.” The churches in 1940 also helped out those in need with Christmas baskets. Several groups made quilts for families “in need of warm bedding.” A “Mitten Fund” was established to see that every child in town had warm hands in the winter. In 1940, Norwich children were given 215 pairs of mittens. The description of the generosity of the town went on for many pages and was summed up with these words, “No matter how much we work through organization, nothing will ever replace the need for a great measure of much so called old fashioned kindness, friendliness, and neighborliness!” 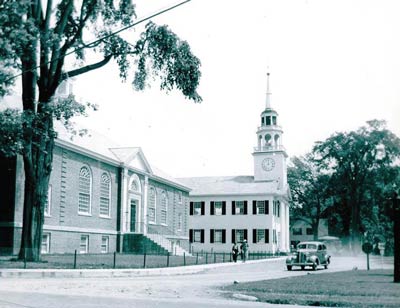 “Over its spidery roads, leading through valleys and climbing steep hillsides,” began Helen Southworth’s report on the town’s roads, “Norwich folks have traveled from the generation of vigorous frontiersmen to the effete descendants whose luxurious cars keep more and more to the broad valley highways.” The writer regretted that there were no more carriages rushing to the station and that old roads were, “…ruthlessly destroyed in the modern obsession for speed and still more speed.” Most of the town roads were kept open in the winter, but during spring mud season it was a different story. “In March,” she noted, “many an ancient horse and buggy is seen going serenely along the village streets while the owner’s car remains in his hilltop garage.” Southworth felt the corner at Church and Main Street near the school, “…is a traffic hazard, and in spite of improved signs, a blind turn to strangers.” To protect the school children, the entire 8th grade at the town school became members of the state run School Patrol System. Each patrol leader wore a white belt with the state safety patrol buckle, along with a sweater and cap donated by the American Legion. Patrol leaders were stationed at the white church across from the school, at Tracy Hall, and at Elm Street. “These are the most dangerous points on the home-to-school route, and patrol leaders stationed at these points protect the children at the confusing turn on Route 5 at the school house corner.”

By 1940, the business scene in Norwich was changing, wrote Mrs. Southworth in the section on Norwich Industries. There were 21 ‘businessmen’ in town, but Southworth noted that the service for “blacksmiths, and harness makers was falling off, while the garages flourished.” A few new ‘industries’ were beginning in 1940. A ski school was opened on Cemetery Hill with a portable tow run by a tractor. A ‘cozy cabin’ with a stove and lunch counter was built near the ski tow with high hopes for a snowy winter. Plans were also underway to construct sheds for a mink ranch to be built in the western part of Norwich. By the summer of 1941, “…it is expected that the sheds will be occupied by 3,000 mink.” Norwich was selected for the ranch because “mink food is manufactured near here and the weather is believed to be cold enough to assure pelts of high quality.”

“At the close of the day,” began Mrs. Southworth in the chapter on recreation, “when the town’s ledger has been balanced, when the town’s offices and shops are closed; the school bells are hushed and the mill-wheels have ceased turning, then our town people seek relaxation and recreation.” In 1940, there were a variety of free time choices. In Union Village there was a Young People’s Club that taught teenagers how to introduce speakers and run a meeting “according to parliamentary procedures.” In the same hamlet, Rev. Rand ran an “extremely successful arts and crafts class.” There were circulating libraries in Union Village and in Norwich. In winter there was the Dartmouth Winter Carnival, skiing, and skating on “the pond on the campus, prepared and maintained by the Firemen with some help from the children.” There was also the annual school sleigh ride for the children. “When the sleigh bells jingle, and the children ride by laughing and calling to each other, many an oldster experiences nostalgia for the days of cutters and proudly stepping horses.” 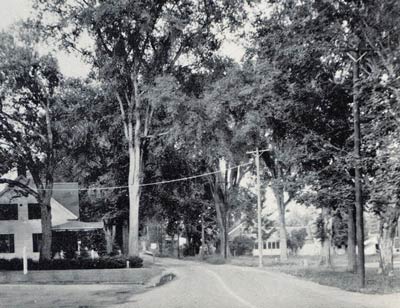 “The village itself, 177 years after the first settler came is dignified and charming in spite of the rush of motor cars along Route 5,” proclaimed Mrs. Southworth at the conclusion of Know Your Town. “The pride in lawns and gardens is widespread. The number of unkempt and unsightly buildings is few. Even the stores and garages in most cases are in keeping with the village character.” Written in 1940, at the end of the Depression and on the eve of the United States’ entry into World War II, Know Your Town discussed the beauty of the town, how it cared for its poor and children, and how it coped with changes in transportation and technology. “It would be a tragedy,” she concluded, “to have some outside industry through its modern and progressive interests mar this age-old atmosphere of stability and leisure too rare today. When civic pride is strong, such an inheritance remains a delight to visitors and joy forever to those whose home is Norwich.”