Kindness Rocks Around the World 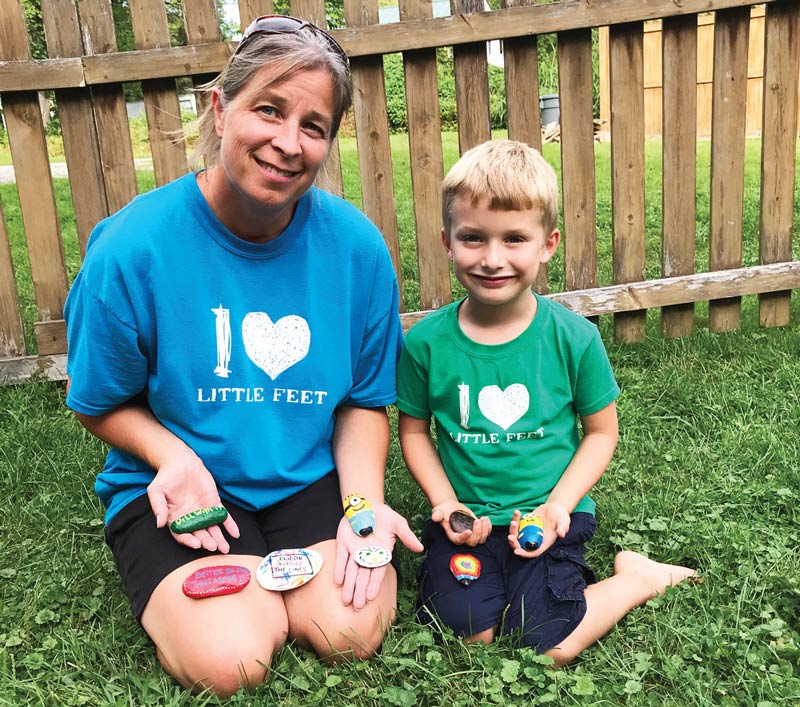 They call them “Kindness Rocks.” Small (usually), smooth (for ease of painting), brightly colored (mostly) painted rocks people make and leave for others to find. Painters create an image or upbeat message hoping to cheer the person who finds the rock. Locally, a big fan of the project is Christine Tullgren, the owner and operator of Little Feet Children’s Center in Thetford. 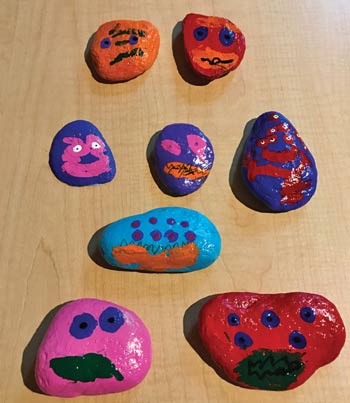 The project started with Megan Murphy, a Cape Cod resident who wanted to increase kindness and inspiration in the world by putting encouraging messages on beach stones. Now there are Facebook groups where people post messages or photos of placing rocks somewhere. Christine has been hiding rocks – “probably several hundred” she estimates – since July. She started a Rivendell Rocks FB page. “I’ve been getting a lot of questions about the rocks,” she says. “It’s fun when someone finds one and takes the time to post.”

Christine’s daycare children painted rocks. One boy, Bryce, was somewhat reluctant to hide his rock – he really liked that rock! – but did leave it near a favorite tree in a Danville campground. Two little girls found it and sent a picture to the FB page; later one of them left the rock on a beach.

Some people feel that leaving more human traces in wild places is littering, even when the intent and the offered messages are kindly. “I realize that people who are participating in this have the best of intentions,” says Laura Friesen, writing on the Hike Like a Woman website. “They’re looking to form a community and brighten someone’s day. Which is great! But if you’re looking to make the world a more positive and kind place, there are many ways you can do this without infringing on [the principle of Leave No Trace]: Smile and hold the door for someone. Buy a coffee for the next person in line. Donate to your favorite charity. Help out with a trail cleanup project. Shop locally and get to know the business owners. Participate in a community garden project. Shovel your neighbor’s sidewalk. Volunteer. The possibilities are endless.” 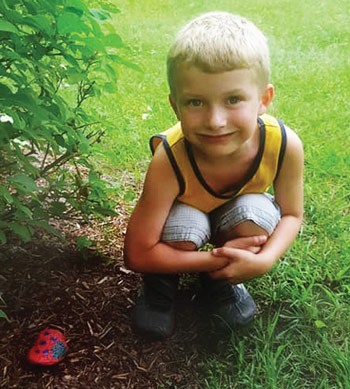 “I’ve thought about this,” says Christine. “I haven’t had any negative feedback, but sometimes I wonder. I try to be mindful where I put them. I would not go to a mountain top and leave one.” She has seen a post of a message sprayed on top of a mountain, a nice word, she says, but an inappropriate place. National parks and even Disneyland have forbidden rock placements.

Still, Christine and others find it hard to abandon the pleasure of creating hopeful messages, thinking all the while of who might find them and how they might be cheered. And stories from rock-finders egg on the rock-hiders. Christine tells of a post that gave her goosebumps. A woman had lost a beloved nephew who would have been 13 years on a day she took an unusual zigzag route through the parking lot, and found a beautiful butterfly rock. Hmmm…