Kids Bridge Comes Back to Life 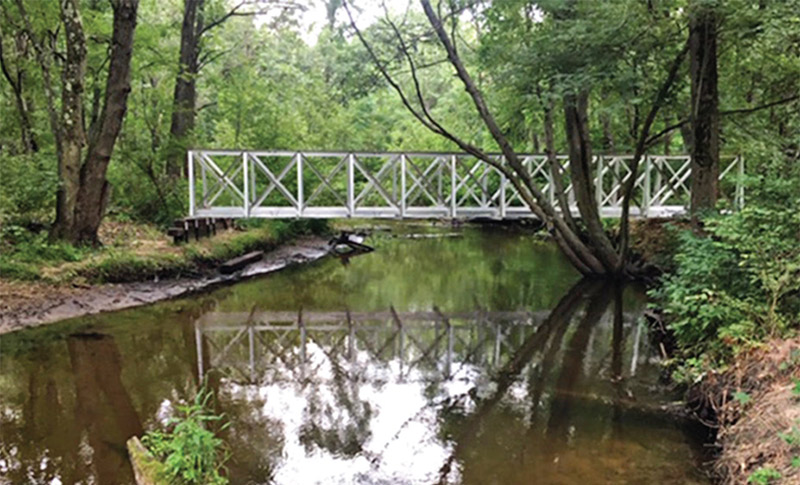 Nine years ago, one of the most damaging storms in Vermont’s history came roaring in, bringing the state to its knees, as some said, with more than 500 miles of state roads destroyed, 60,000 homes and businesses without power, and 200 bridges damaged or ripped off foundations.

One of those was the Norwich’s Kids Bridge over Blood Brook connecting Beaver Meadow Road and neighboring families to Huntley Meadow. Kids used the bridge to cross the brook on foot and bike to use the fields, playground, and continue on their way to school and town.

The wooden bridge, built by Eagle Scouts, was never replaced, despite an approved bridge design, necessary state and town permits, and approved site. The last remaining obstacle was expense – until now.

Thanks to private donations recently received from residents and friends of Norwich, the town has set up a special fund called the Kids Bridge at Huntley Meadow. To date, over $10,000 has been raised to replace the bridge. The estimated cost for the project with riverbank abutments and slope suitable for bike and foot approaches, in addition to the assembly and placement of the bridge, is $12,000. The total cost, however, is projected to be $20,000.

The steel prefabricated walking/biking bridge will be delivered to Huntley Meadow. The grading and footings and the installation of the bridge across Blood Brook will be done entirely by volunteers from the Trails committee, local contractors, and residents.

“We are currently past the halfway point in donations from friends of Norwich,” said Norwich resident and project overseer Don McCabe. “If friends continue to make tax deductible donations at our current pace, we hope to have the bridge in place this summer.”

McCabe’s family has lived in Norwich for 36 years. He and his wife, Lisa, built their house there, raised their children and brought them to Huntley Meadow over many years, crossing the old suspension bridge, catching crayfish under the bridge and going for an occasional swim.

“Our kids came to Huntley for sports practice, family picnics, kite flying with friends, and biking over the years,” said McCabe. “When it became clear recently that there was not enough support for taxpayer dollars to replace the bridge, the old-fashioned ‘let’s do it ourselves’ spirit took hold. I reached out to personal friends first, then to Norwich residents through the Norwich List.”

The response has been overwhelming, McCabe related, but there are still more generous friends needed to make the Kids Bridge a reality this summer. He met with Norwich town manager Herb Durfee, Recreation Council director Brie Swenson, and members of the Norwich Trails Committee in March to find out if there was collective interest and support to proceed.

“All supported the concept of private funding and volunteer person power for this community project,” said McCabe. “The town manager agreed to set up a designated fund to be used solely for the Kids Bridge. The Recreation director agreed to manage the project and secure permits from the state. Local contractors agreed to donate their time and equipment to prepare the bridge site. The Trails Committee volunteered its members to assemble and place the prefabricated bridge.”

That need for funding and the warm memories that many families have had over the years using the bridge with their children prompted McCabe to begin the fundraising project using only private donations to bring the bridge back to Huntley Meadow.

McCabe believes that when Norwich families donate to the Kids Bridge project, it underscores the commitment to ‘think globally, act locally.’ “We’re aware of what is happening in our country and the world,” said McCabe. By putting resources into rebuilding the Kids Bridge, past and future generations of Norwich residents, alike, can talk about the simple pleasures of life like “…hiking and biking across the little bridge that spans the brook.”