Keeping the Jingle in Your Step 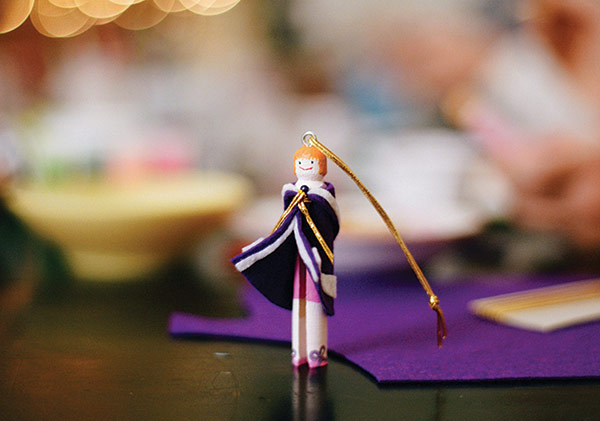 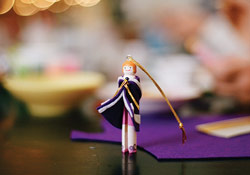 The holidays can get crazy. Lots to do, never enough time. It can all easily degenerate into a Stress Odyssey. The Norwich Times asked around to find out how people manage to keep the JOY in the holidays (and hold the stress at bay).

Artist Kate Emlen lives on Elm Street. “I don’t necessarily go out looking for joy,” she admits, “but it snuck up on me yesterday while I was vacuuming my kids’ rooms and singing along with my headphones on. The kids will both be home, to be joined soon after by my three quirky brothers and families. Doesn’t get any better than that and I get a clean house as a bonus!”

Gail Langeloh, who lives on Kendall Station Road with her husband, John Roback and their two daughters, has a simple answer: “Balsam scented candles. Everywhere!!” She elaborates, “I break them out after Thanksgiving. They remind me of winter and a Christmas tree, but without the effort of getting the tree up (which happens later). I guess they keep me going because the flickering lights are pretty and they smell wonderful. They remind me that holidays are coming.” 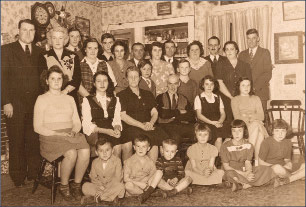 Bill Aldrich (standing, wearing v-neck sweater) and his extended family celebrate Christmas in the parlor of the Aldrich House in 1945. Note star on top of the tree in top left corner.

Dawn Carey, who lives on Hogback Road and works at The Dartmouth Institute for Health Policy & Clinical Practice, learned how to keep her eye on what’s really important about the holidays the hard way.

“There is nothing like breaking your wrist four days before Christmas to help strip things down,” she says. On December 21st of last year, Dawn slipped on some ice and broke her wrist. She had been on her way to a party and was all dolled-up. Always the intrepid optimist, she posted a photo of herself from the ER and labeled it “ER Best Dressed Award.” Despite the bandages and IV sticking out of her arm, she looked great. Still, it was terrible timing. “I remember sobbing on the way back from the ER, realizing that I hadn’t wrapped ANY presents, made any of our favorite foods, or done the laundry in the past week. Christmas was ruined.

“Then it slowly dawned on me that all the things that I LOVE about the holiday were still there: the snuggly-ness, all my kids in the house again, the small rituals of love. The kids, three out of four of them well into their twenties, still donned their matching jammies. We still read the letter from Santa and reveled in each others’ company. Christmas is the epitome of coziness for me.”

Jennifer Roby’s approach to the craziness that can overtake the season is a pragmatic one. “I usually keep a pretty detailed list of what I need to get done. (Of course that’s an everyday issue!) I keep my calendar open specifically around the holidays and devote whatever time I can to family. My favorite place to be is at my parents’ house, with my family, just sitting in front of the fire, chatting, laughing and reminiscing.” 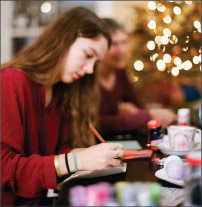 Family is the focus of the season for Bill Aldrich too. Bill, who has lived in Norwich his whole life and is surely a fixture in town, says he “does nothing really out of the ordinary” during the holidays. “We just enjoy family, which is close by.” Over the years, Bill’s extended family, some eight or nine generations of it, has been rooted here at least since the early 1800’s.

“The MOST important thing,” Bill explains, “is when the grandchildren all read a page out of the Story of Christmas all the way to the end. They start as soon as they are old enough to sound out the words.”

Growing up with extended family all around town, generations of Aldriches – including Fullingtons, Grays, Wallaces and Wests, Bill and his many cousins and other relatives gathered at his grandparents’ house, known to this day as the Aldrich House at 16 Beaver Meadow Road.

“I guess I’ve learned over the years to go with the flow. In my working days, I worked a few Christmases. Since I’ve retired, my wife and children make it go easily. We all get together here on Christmas Eve and exchange gifts with the grandchildren. We give our kids and spouses a card with the easy-to-give gift: cash. Then they can get what they need. We have a lunch or dinner, according to the time of day, and then we chat while we slide into our usual comfort of enjoying the day. Then on Christmas morning we’ll go to our kids’ homes and watch the grandkids open their gifts. We’ll have lunch at one place or another, and then return home to watch football. Or not!” 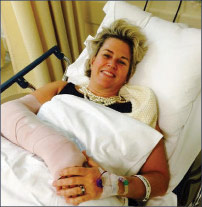 Dawn Carey after breaking her wrist in December 2014

Once the kids have grown up and Santa is no longer coming down the chimney, many people find a solution to holiday financial-overextension and exhaustion by shifting the focus from gift-giving to family activities. “We finally did away with gifts and made a game of it,” offers Martha Sass who works at Zuzu’s. Martha’s children are now college-age. “Last year we each spent Christmas morning writing an original poem. The poems went into a jar and we read them aloud at dinner. Everyone had to guess who wrote which poem. It was really fun.”

“We also make up variations to the old Yankee Swap,” she continues. “Last year we did a sort of Yankee Swap/Bingo thing. We had a grab bag of small items, all wrapped-up. Everyone pulled a gift out of the bag. Then we read The Night Before Christmas [a.k.a. Clement Clarke Moore’s poem A Visit from St. Nicholas] aloud. Every time the word ‘the’ was read, you passed the gift in front of you to the person on your right. When the story ended, whichever gift you had in front of you was yours! It was fun.” 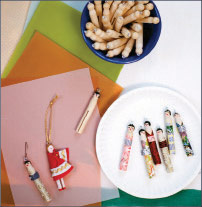 Clothespin tree ornaments made at NHS

Any effort made at the holiday season can be appreciated. Eileen McHugh, owner of Zuzu’s, recalls a wayward Christmas gift that managed to hit the mark anyway. “One year my sister, who I think was in high school or college at the time, tried to make a Christmas stocking for our mother. She embroidered her name on it and everything. But she didn’t finish it in time. My mother still uses that half-made stocking, every year.”

Creating something helps bring color and joy to the holidays. For several years running, the Norwich Historical Society held a yearly ornament decorating party for all comers, young or old. Free and open to anyone, the event featured tables spread with all the materials needed for creating something sparkly. Cookies and beverages were provided. Strangers (with or without crafting experience) gathered to chat over glitter and glue, and find the Zen of working with their hands to create something beautiful. People who hadn’t known each other before had a chance to chat without feeling self-conscious or forced, using ornament-making as a good excuse just to play.

Devotees of the 1990’s TV show Seinfeld will remember Frank Costanza (Jerry’s pal George’s contrarian dad, played by Jerry Stiller) explaining his own, made-up holiday called “Festivus.” Created in real life in the 1960’s by the father of one of the show’s writers in response to family holiday tension, “Festivus” found its way into a script and made its way into popular culture as an alternative to the commercialism of Christmas and the relentless pressure to be inclusive. In the 166th Seinfeld episode called “The Strike,” Festivus is celebrated by the fictional Costanza family “anytime from December to May.” It includes such annual rituals as “The Airing of Grievances” and “Feats of Strength.” Instead of a Christmas tree, the Costanzas erect a naked aluminum pole. Frank Costanza’s fervor for Festivus with its motto “Festivus for the rest of us!” is well worth watching online and remains a gentle reminder not to get too crazy. 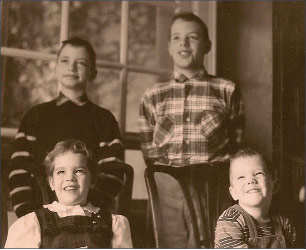 Kate Emlen and her “3 quirky brothers” circa early 1960s

“The warmth of friends and family fills me with the joy of Christmas,” Dawn Carey concludes. “It burbles up when I revisit small touchstones of connectedness. I still bawl my eyes out at the Norwich Pageant and while watching How the Grinch Stole Christmas. Every. Single. Time.”