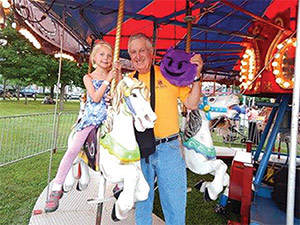 Jay Van Arman has devoted most of his life striving to give what he can to make Norwich a better community. Not long after his new father-in-law passed away and Jay took over operations at the family farm of his wife, Debby Van Arman (previously Pierce), he began driving the school bus for the Norwich School District.

Jay drove the bus from 1971 to 1978, while raising three kids – and a herd of Jersey cows – with Debby. After driving the bus, Jay began to work for the United States Postal Service. At the same time, he was very active in the Norwich Lions Club which is part of one of the largest service organizations in the world. On occasion, they connect with other local chapters to coordinate on events, but mostly the Club focuses on civic volunteerism within the chapter area. He credits the Lions Club with much of his volunteerism since the idea behind the Lions is neighbor helping neighbor.

He served on the Norwich Selectboard as well as the School Board, each for two terms. Jay was also on the Zoning Board. The Norwich Fire Department was lucky enough to have him for 29 years, including a short period he spent as assistant chief. Jay was, and still is, focused on helping create a better town with each small step.

Jay is on the council for the Parish Church and, for some time was also a Justice of the Peace. He understood the idea of giving back as more than just helping Norwich by working on the boards that govern it, but also by providing love and support to those who needed it. 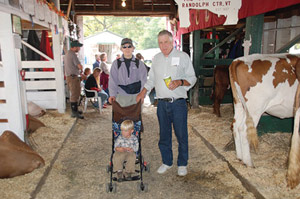 When Jay retired from the Postal Service, one of the first jobs he began immediately after was driving the bus again. “I love kids and I enjoy driving the bus,” he said. The image is one that makes me smile. My own young daughter has a bus driver who is much like Jay; it is wonderful to know your child is in safe and happy hands.

Debby Van Arman shares Jay’s volunteer spirit as well, and sometimes they work together in various ways, like keeping up the appearance of the town. Jay is the one who puts up the flags on Main Street for Patriotic holidays, with help from a man named Demo, and he decorates the trees with Christmas lights. Debby plants flowers along Main Street and keeps them watered. She is also very involved with the Norwich Historical Society. Their farm was featured in the 2014 House and Garden Tour.

Debby is also present for much of the work Jay does with the Lions Club, helping out where she can. Once a month, the two of them assist with the Lions Club sponsored dinner at the Listen Center. Jay, taking less credit for himself, reiterated the influence of the Lions Club on his dedication to giving back.

As we spoke more about Norwich, I could hear his love for the town in Jay’s voice. He said, “I think people should try to give back to the town they live in. If they live in a town, they should help out wherever they can.”

« Previous post
A must-experience performance for a great cause…This Wednesday night at the Lebanon Opera House, 7pm.
Next post »
Crossing the River: The Building of the Ledyard Bridge