History in Slate and Stone 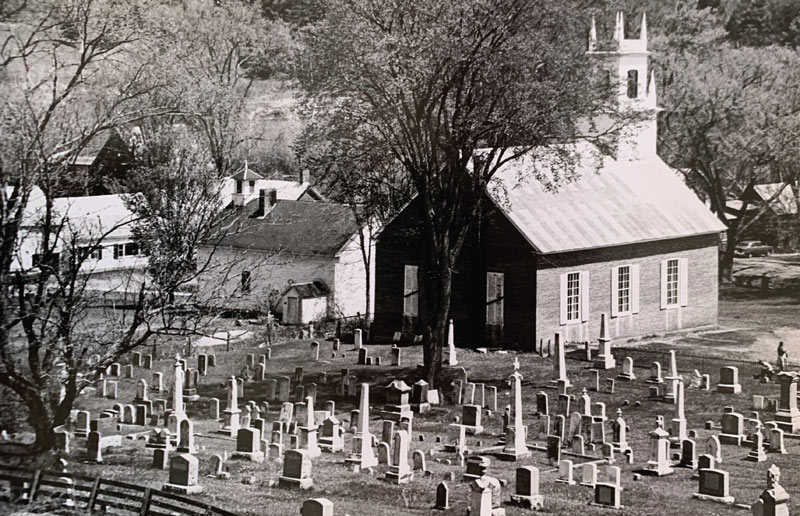 In 1770, only eight years after Norwich was founded, the infant twin Slafter boys, Asahel and Asaph, died and were buried in the Waterman Hill Cemetery. These were the first documented burials in Norwich, and this is the oldest cemetery in town. Lying north of the village just before the Pompanoosuc River and west up on Hemlock Road, the Waterman Hill Cemetery was a final resting place for many of Norwich’s early settlers, and a stroll over the grounds and an examination of the gravestones offer historical sketches into the challenges faced by the first residents. Diseases that are rarely mentioned today were fatal, infant deaths were common, and few lived to a golden age.

Along with Waterman Hill Cemetery, which closed in 1895, there are ten other known cemeteries in Norwich. They range in size from four graves to over 2,000. Some can be reached by foot from the Norwich Inn, others require a short drive, and for a few, you should prepare for a hike with a good map.

On the northern outskirts of Norwich at the intersection of New Boston Road and Norford Lake Road is the New Boston Cemetery. This cemetery was first used in 1790 for the burial of the infants of Elija and Lydia Baldwin. “The largest of the families buried here was the Sargents, who were known for being sawyers and owning large parcels of land.” It’s medium in size with 120 graves and is built on a hill like the majority of the town’s cemeteries. Its last burial took place in 1977.

The Union Village Cemetery, located adjacent to the United Methodist Church, opened in 1823. This is one of the larger cemeteries and it sits on land owned jointly by Norwich and Thetford. “This cemetery seems to attract large families of ‘C’s: Cambridge, Clark, Clogston, Cloud, Clough, Colburn, and Cook… but the Watermans are the largest group.” The cemetery has more than 500 graves and remains open today.

Located near the Waterman Hill Cemetery in the Campbell Flats area is Hogback Cemetery. One of the smallest in town, with only six known graves, it was opened in 1826 with the burial of four-year-old Hamlin Hubbard Jr. “Long after its closing in 1870, a new Sargent Cemetery was erected in 2000, and is attached to the Hogback lot. It is being used by the Sargent families today.”

To the northwest of Norwich village, two miles out on Turnpike Road, lies the Rogers and Hartshorn Cemetery, the second-smallest of all cemeteries in Norwich, with only five burials. It opened in 1844 and no known burials occurred after 1850.

A short drive west of the village lies the small community of Beaver Meadow. Paul Sample, one of Norwich’s most famous artists, created a painting of Beaver Meadow that included the hamlet’s chapel and to its left, the Beaver Meadow Cemetery. It closed in 1966 and holds 250 gravestones. The burial grounds were first used in 1795, to inter 41-year-old Roxalana Sawyer. “Luck was not on her side, as she was one of the two wives of Conant Sawyer and together they lost five infants.”

If you are looking for a challenge, the next two cemeteries might be worth the effort. But first, lace up your hiking boots. Located a 30-minute walk off Cossingham Road, not far from the Appalachian Trail in an area called Podunk, lies Parkhurst Cemetery. Again, the first burials in 1826 were for children, one only a month old and the other three years old. Tragedy seems to have plagued this area, for “among the eight different families buried here, 12 out of the 21 deaths were people younger than 25.” The now abandoned cemetery had its last burial in 1873. Nearby the Parkhurst cemetery is the Newton Cemetery, Norwich’s smallest burial ground. This one is named for the four members of the Newton family who were buried here between 1849 and 1885.

Fairview Cemetery, located a short distance from Main Street on Beaver Meadow Road, is the second-oldest cemetery in Norwich. It opened in 1772 and was once known as “The Norwich Plain Cemetery.” Remarkably, more than a thousand burials took place on this small plot of land. Many of the first resident families – the Burtons, Hatchs, Hopsons, and Wrights – are buried here. A large obelisk in the center of the cemetery is the resting place of Alden Partridge, founder of Norwich University. A garage at the west end of the cemetery once housed the town’s circa 1910 horse-drawn hearse. The hearse was restored in 1995 and now resides in the Norwich Historical Society’s barn.

The Hillside-Loveland Cemetery, also known as the Cemetery on the Hill, is the largest and newest cemetery in town, with more than 2,000 sites. Located off Hopson Road and up Hillside Road, the left-side cemetery is located on land that once held the Altow ski area, which operated in the 1940s and ’50s. The land was once owned by the Snite family, whose daughter, Betsy, participated in the 1956 and 1960 Winter Olympics. Paul Sample’s grave site in the northeast section overlooks the entire cemetery, with a wonderful view of the Congregational church and Baker Library at Dartmouth.

Along with the history that can be gleaned from a stroll around a town cemetery, the gravestones can also provide a glimpse into the art of the time they were created. In the four oldest cemeteries many of the headstones were created by Gershom Bartlett, one of the earliest gravestone carvers in the region. Bartlett moved from Bolton, Connecticut, to Norwich in 1773 after he purchased 400 acres of land in the Pompanoosuc area. He worked for the town as a highway surveyor, fence viewer, and lister. But Bartlett is best known for the nearly 350 stones he carved between 1773 and 1797 that can be found in cemeteries from Windsor, Vermont, to Orford, New Hampshire.

Bartlett used a chisel, a few mallets, and perhaps a compass to create his gravestone art. His carvings are original and in some cases bizarre to the modern eye. But his work is easy to identify, with their distinctive design of faces that look like clothing hooks. “The simple curved lines with which he rendered facial features on headstones earned him the moniker, ‘the hook-and-eye-man.’” Often the faces had turned-down mouths and bulbous noses. Pinwheels and four-leaf clovers were etched along the sides. The top of the stones came in a variety of patterns, some with a skull, some with a cherub ascending to heaven, and some with a willow tree and urn.

It generally took ten days for a carver such as Bartlett to create a stone, deliver it, and set it up. For his efforts, Bartlett received $8. But his work did not make him a wealthy man. When he died his “real and personal estate” was valued at only $481.62.

Gershom’s wife Margret died in 1778, leaving behind eight children. But even with a large family to tend to on his own, Bartlett continued to create gravestones until he died at the age of 75 in 1798. He is buried next to his wife in the Waterman Hill Cemetery.

Thanks to Lauren Pidgeon for her work creating a walking tour of Hillside Cemetery this summer: www.norwichhistory.org/hillside-cemetery. All quoted material comes from Norwich, Vermont: A History and was written by Bill Aldrich. The Cemetery Commission, Norwich Public Library, and Norwich Historical Society have access to most of the cemetery maps. The Norwich Historical Society has an updated record of most occupants of the cemeteries.