Have We Got a Book for You! 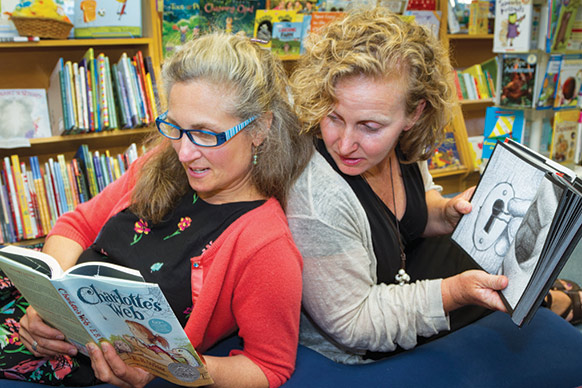 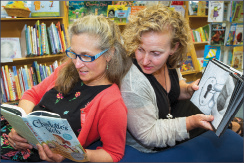 “What I say is, a town isn’t a town without a bookstore. It may call itself a town, but unless it’s got a bookstore, it knows it’s not fooling a soul.” – American Gods

Long-time Norwich residents may disagree with Neil Gaiman’s assertion, saying that Norwich’s career as a fine town antedates the arrival of the Norwich Bookstore, but who would not agree that the Bookstore improves the town? Not just books, but community-building ideas hatch at the Bookstore, such as the Book Angels program that provides donors an opportunity to give books to children at Christmas. And, through the energy of two booksellers, “The Book Jam,” a jazzy blog, was born in 2010 to spread news of good books. Lisa Christie and Lisa Cadow stated their mission: “We’re here to help you out of those troublesome ‘book jams.’ You’re in a ‘jam’ when you ask: ‘What should I read next?’ ‘What’s the best new cookbook to give Mom?’ ‘What do I, rural girl in a flannel shirt, give my sophisticated best friend who lives in New York City or Seattle?’ We aim to put the right book in the right hands at the right time.”

The Book Jam’s roots are both practical and idealistic. Christie explains, “The blog started because the Bookstore needed a stronger internet presence. And we both really strongly believe in the power of books and stories to change lives.” She adds, “Basically, we decided the blog would not be ‘work.’ We’re not book critics per se – if we don’t like something, we don’t review it.” Enthusiasm shines through the blog and makes you want to abandon other projects and run to the library or the Bookstore or your “to read” shelf and start reading!

The two Lisas read whatever catches their fancy, whether because of reviews, events in the news, or their own family or travel plans. There have been posts on Pakistan, natural disasters, and Iceland’s Nobel-prizewinning Haldor Laxness. After reading independently, the Lisas consult with each other and find a theme developing for the blog. There’s a new post every other Monday, except in the summer, when they take a “Gone Reading” break from posting – but never from reading. The blog has over 500 subscribers and gets about 1,000 hits a month.

Eventually the Lisas decided to put on a live event, and in April 2012 introduced Pages in the Pub, a sort of speed-dating for books, and a fundraiser for the Norwich Library, held at the Norwich Inn. Four local book mavens each reviewed three books; admission tickets covered a drink and a donation to the library. The Bookstore took book orders. The event sold out and then some, and in later years Lisa Christie has taken it on the road, linking up with independent bookstores in northern Vermont and Rhode Island to spread enthusiasm for good books. (Early notice is here given: Norwich’s next Pages in the Pub will be the week after Thanksgiving.)

Lisa Cadow, who is on the board of the Norwich Library, discovered “Tables of Content,” another fundraising idea. Hosts pick a book they love – “in that year, or in their lives” says Cadow – and guests sign up for a dinner gathering based on the book, not knowing who the hosts are. “Almost more important than the book discussion is the community-building,” Cadow says, though the several thousand dollars each event raises are helping the library achieve opening on Sundays during the school year. 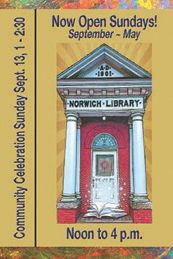 Lisa Christie currently devotes most of her time to parenting, but B.C. – Before Children – she spent several years donating her talents to a non-profit called “Everybody Wins!” which links adult volunteers with children for a once a week reading session. “It’s a great story, how it got started,” says Lisa, launching into her story like the Ancient Mariner. “It began in New York City in 1992. A businessman in the garment district walked by a school every morning on his way to work, and he went in to the principal and said he’d like to read to some of the kids. I guess she looked at him as though he had twelve heads, but he persuaded her and eventually she said OK. He had so much fun doing it, he talked about it at work and got everyone doing it.”

The model is simple: one adult meets once a week with one child to share reading and discussion of a book. Meetings are at lunch or recess, so they don’t disrupt the school program, and it’s supposed to be fun; if the child doesn’t like one book, help them pick out another.

The program attracted the attention of Senators Jeffords and Kennedy, who headed the HEW committee, and they sicced their staffs on investigating. The report came back, “It’s fabulous!” so the senators challenged colleagues and staff to try it at a local elementary school. Apparently the school nearest the Capitol is not a high-performing school, but rather, says Christie, the kind of place where there are shots on the street corners. The program was a success in D.C., and spread to several other cities. An effort was made to bring it to Vermont, but failed.

When she moved to Vermont in 1999 and couldn’t find a paid job, Christie took up the challenge to restart an “Everybody Wins!” program in the state. The first year she established the program in Rutland and Barre. A $2,000 grant from CVPS covered the cost of local coordinators. Her goal was to have 20 volunteers working in each city; by the end of the year she had 40 in Barre and 100 in Rutland. After 4 years she had 17 schools on board, with about 600 volunteers. In the White River School, the closest participating school to Norwich, there has been a volunteer for every kid in the school.

“Teachers in Vermont consistently say, no matter what school, that the people who benefit most are not the highest or lowest performing students, but the average kids in the middle. Is it because they usually don’t get much attention? Who knows, but they become more confident, and more interactive in the classroom.”

Christie is not fussy about formats: paper, e-reader, audiobook – she enjoys them all. With her characteristic gusto she exclaims, “Anything that gets people reading, I’m all for it!”