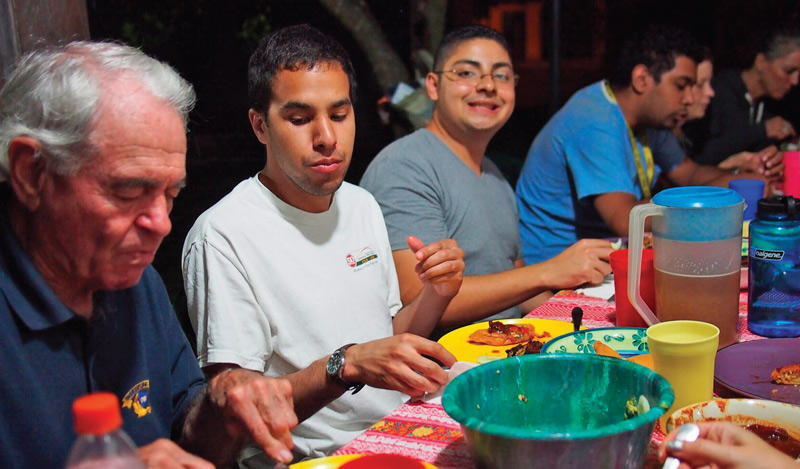 In October 2018, Nick Krembs, a retired carpenter and builder from Norwich, traveled to the United States border in El Paso, Texas. That year marked a huge surge in migrants seeking asylum from their home countries. Due to the drug cartels, corrupt police, torture, oppression, gang violence, and abuse, as well as the devastation and destruction of farms and their livelihoods from hurricanes – they fled.

Krembs’s sister, Jane Greiling, a retired nurse, had been volunteering in El Paso with the Annunciation House: a faith-based nonprofit organization that provides shelter, clothing, and food to migrants predominantly from Mexico and Central America. Krembs joined her for two weeks at the border and volunteered in the migrant shelter, Casa Vides in El Paso.

One day, Krembs met Hugo in the “Ropa room” of the Casa Vides shelter. Hugo, 50, was traveling alone, seeking asylum from oppression in Guatemala. He had never been to the U.S. before. Loud, warm, and jovial despite his circumstances, Hugo immediately took on a self-appointed, leadership role in the shelter: taking care of other migrants, guiding, and reassuring them. He consistently offered to help the volunteer staff with housekeeping duties as well. Though Hugo had never lived anywhere cold, he was trying to reach extended family sponsoring his asylum in Chicago.

Despite a language barrier, Krembs, who speaks little Spanish, sought to prepare Hugo for the polar vortex of subzero temperatures he was about to face. In a tropical country like Guatemala, any temperature below 70 degrees feels cold. Hugo was about to move to Chicago in the dead of winter. They sorted through the Ropa room and found a large wool overcoat for Hugo. “Perfecto,” said Krembs.

After he returned to his home in Norwich, “the need gnawed at me,” said Krembs. So, he went back to the border – this time for eight weeks: from December 2018 through January 2019.

The Casa Vides is a rectangular red brick structure with two floors. Adults with children are roomed together. Otherwise, women have dormitory rooms on the first floor and men on the second. Each floor has just two shared bathrooms with showers. There were always lines of people in the halls. Their moods were often somber except for the children who ran, shrieking through the halls with siblings and new friends.

Bussed directly from the ICE detention centers, the migrants Krembs met – dirty, hungry, anxious, and tired with nothing but what they could carry – were the lucky ones. Others had been denied entry and deported back to their home countries. For permission to enter the U.S., the migrants had to show proof of sponsorship: a family, relative, friend, or a private organization or charitable group.

As though they were criminals on parole, ICE put ankle bracelets on many of the adult asylum-seekers; tracking them even though they had committed no crime. The migrants arrived at the border with few possessions. Some had spare clothes in a plastic garbage bag, but that was it. Rarely did any have money.

Krembs didn’t see any intact families. He saw fathers with children, mothers with children, and children who had been separated at the border as well as unaccompanied minors sent alone by their parents. Due to sacrifices and the costs to get to the border, as well as the border rules and restrictions set by the Trump administration, families were often split apart by the time they reached the shelters.

A huge, “Bienvenidos” sign and big, empathetic smiles from the volunteers greeted migrants upon their arrival at the shelters. They were promptly interviewed and volunteers set to the task of connecting them with their friends and family in the U.S.; their final destinations.

The migrants were each given a bar of soap and a towel and assigned to rooms with bunk beds – up to eight people per room at a time. Travel arrangements were made and paid for by sponsoring host families, relatives, or organizations. So, after two or three days at the shelter, the migrants took a bus or plane to their temporary new homes where they would start the process of applying for asylum.

In addition to offering hospitality; cooking, preparing meals, cleaning, and helping migrants get clean clothing, Krembs shuttled eight passengers in a van two or three times a day to the airport and the bus terminal. And still, he felt compelled to do more.

Once back home in Vermont, Krembs joined The Upper Valley Refugee Working Group, a 501c3 nonprofit organization based in Hanover, NH. This organization provides sanctuary and assists immigrants residing in the Upper Valley with acquiring basic subsistence with help from volunteers and financial support in the form of an Immigrant Community Support Fund. There he met and became friends with two other volunteers, Dr. Dean Seibert, also of Norwich, a retired physician and professor from Dartmouth Hitchcock Medical School, and Bill Ploog of Lyme, NH.

The three united in a shared mission to improve the lives of asylum-seekers in the U.S. by using the resources and connections they have in the Upper Valley.

“I returned to El Paso each time knowing I could do little to change the gang violence, government neglect, and climate disasters that drove all these people to flee their homeland,” said Krembs. “The action I could take is to show compassion and accompany them in seeking asylum in the US. I can do this here, where I live, as the sponsor of a few of those coming to our border seeking asylum.”

Krembs is 76. Seibert will be 89 this August. However, their ages do not impede them from actively engaging in each step of this life transforming mission, both for the asylees and for themselves.

And so, in 2020, along with Seibert and Ploog, Krembs formed SHARe: Supporting Helping Asylees and Refugees. (The ‘e’ is small and silent.) SHARe is now an all-volunteer, non-sectarian, non-profit, tax-exempt 501c3 organization. Their goal is that by mid-summer, they will start supporting up to five individuals or a family from any country, to gain asylum in the U.S. “The procedure to do so is much more complex and involved than many realize,” said Krembs.

Filing for asylum takes four to six months. After filing, it can take up to four years to receive asylum. During that time, a person needs to gain a permit to work, which can take up to a year. Until granted a work permit, the individual cannot work legally in the U.S. Unlike refugees who are granted permission to enter the U.S. while in their home countries, and once here, are given governmental support from the State Department, asylum seekers are completely on their own. They must depend on aid from family, private organizations, and/or generous donors.

According to Krembs, there is a backlog of some 1.2 million pending cases in federal immigration courts. Not until a case is adjudicated in a federal court – which can take months or years – can a person become declared a legal immigrant.

In the spring of 2019, the border was essentially closed to anyone trying to enter the U.S.

The border patrol went from allowing 100 to 400 migrants per day into the country to none. All migrants were forced to stay in Mexico. Now, the sentiment toward migrants has shifted and the border is reopened allowing a new influx of people seeking asylum.

SHARe’s primary focus is to find host housing in the Upper Valley for an initial six months or longer, to help support asylum-seekers while they apply for asylum. Once settled, SHARe aims to connect the asylum seekers with pro-bono legal services, English as a Second Language classes, schooling for their children, and clothing, as well as health and medical services.

“The goal is to get those initial five people set up with the support systems they need to live and work comfortably in the Upper Valley while they await asylum,” said Krembs. “We want to help migrants gain asylum and ultimately equip them to become self-sufficient in their lives here.”

Eventually, Krembs, Seibert, and Ploog aim to create a pipeline so that at any given time, there will be at least five asylees receiving SHARe’s assistance in the Upper Valley.

Dr. Dean Seibert has been visiting Honduras twice per year every year for the past 25.

Through his volunteer work with the non-profit ACTS Honduras: Americans Caring Teaching Sharing, Seibert has helped send teams of five to six medical professionals and aid workers per year to El Rosario, a farming village in northwestern Honduras.

The volunteer teams from ACTS now assist the people of El Rosario and a dozen surrounding communities not only with medical care but also with community development including; improving agricultural practices, creating safe drinking water systems and latrines, economic diversification, and access to expanded opportunities for education.

ACTS teams have built trust and developed close working relationships with the people of El Rosario to improve their lives with sustainable solutions for future generations. But still, in most other parts of Honduras, corruption, crime, and poverty prevail.

According to Seibert, a 2016 report by the Carnegie Foundation deemed Honduras a Kleptocracy – meaning, all of the governing bodies within the country: the military, police, gangs, and oligarchs depend on each other to function and survive – thus, mixing corrupt with non-corrupt powers all in the same soil. And so, people’s only option is to flee. The conditions of their daily lives – violence, abuse, starvation, illness, poverty – are so bad that they would opt to risk the treacherous journey to the U.S. border and end up in detention centers or worse, rather than staying in their homeland.

In a tented parking lot, outside a converted elementary school, now a community center and shelter, El Centro San Juan Diego, a line of migrants stood waiting for food. As he prepared to help distribute the food, Krembs connected eyes with a young mother holding a three-year-

old girl. To his surprise, she smiled. Krembs smiled back. He took off one of his blue rubber gloves and blew it up to look like a turkey balloon. He held it out and gave it to the three-year-old. Her eyes lit up and she giggled with glee. n

If you would like to donate your time or skills, or are interested in becoming a volunteer host family, please reach out to SHARe via email them at shareVTNH@gmail.com.