Gleaning Apples for the Greater Good 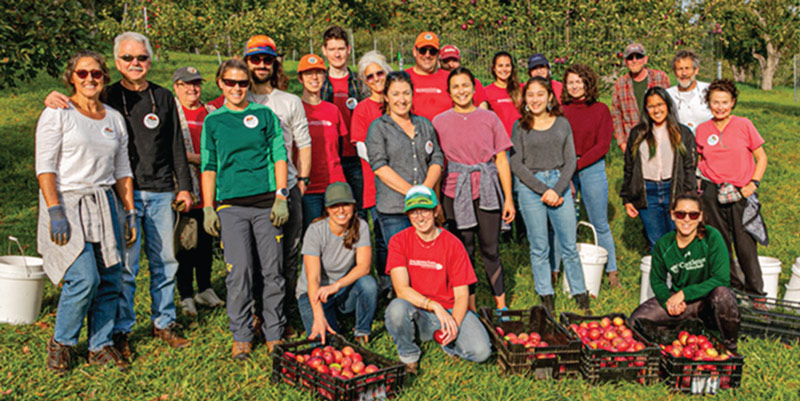 Some dozen volunteers from the town’s Willing Hands will once again be offering their time and labor this year at the Whitman Brook Orchard in Quechee. The Norwich-based non-profit serves people in need of all ages throughout the Upper Valley, having developed an efficient system for food recovery and distribution.

“We arrange for regular pick-ups with over 40 food donors and deliver to at least 58 organizations every week, all year long,” said Executive Director Gabe Zoerheide. “Together we provide one small but effective solution to a very big challenge.”

Many families and individuals in the Upper Valley struggle to make ends meet. And now, with the onset of Covid-19, those facing food insecurity in the region have jumped by 33 percent, according to research by the University of Vermont and John Hopkins University.

For the last ten years, Willing Hands has been sending gleaning crews to Whitman Brook Orchard in order to collect spare apples not collected by owner Terry Dorman’s crew. “We have a great relationship with Willing Hands,” said Dorman. “Because we emphasize picking your own, the once a week gleaning of our apple drops ensures the floor is as clean as possible. What distinguishes us is that our program is weekly as opposed to the end of the season which provides Willing Hands a diversity of fruit.”

Dorman said that the apple drops are collected in three purposes: composting, processing, and first quality for fresh eating. “Willing Hands collects tons of apples each year, about 1,500 pounds in an hour and a half gleaning session each week as long as the season lasts,” said Carolyn Frye, the Gleaning Program volunteer lead. “The apples are then distributed to neighbors in need throughout the Upper Valley.”

As volunteers pick up the drops and cull out the bruised or blemished fruit, they tidy up the floor of the orchard. “Terry benefits not only from the pleasure of donating the apples to Willing Hands but also from having a well-groomed orchard,” Frye said. “The drops from the apple trees could become quite hazardous for people as they wander among the trees picking for themselves.”

This year, abiding by all Covid-19 precautions, Willing Hands volunteers will be gleaning at Dorman’s orchard beginning mid-September, usually on Thursdays, said Jim McCracken, Gleaning and Gardening Coordinator. The apples are then delivered to all of their 70+ recipient sites. “We often have had groups as large as 20 to help with picking the drops,” said McCracken. “King Arthur Flour and some school groups have also helped the volunteers.”

Last year, Willing Hands had 114 volunteers participate, some of whom were repeats. They gathered 12,051 pounds of apples. Since 2017, it has recovered 28,674 pounds of apples and has had 188 volunteers, again with many repeat gatherers, he related.

Norwich volunteer Charles Lindner has gleaned at Dorman’s orchard on several occasions. “It’s a spectacular setting with a view of Quechee and beyond,” said Lindner. “The orchards are obviously meticulously cared for and have a number of varieties of apples. It’s a pleasure to work with a crew of good-natured volunteers and gather large numbers of beautiful apples that get distributed to food shelves throughout the Upper Valley. The gleans are always well organized, friendly, and offer a hands-on opportunity to make a contribution.”

Gleaning Program Coordinator Sara Cavin agreed. “The team that Terry has is friendly and hard-working and extremely knowledgeable about all the varieties of apples they have,” said Cavin.

Frye said that the apple harvest coincides perfectly with the foliage season which is a bonus for the volunteers who come to glean. And, she “loves” introducing Dorman to the volunteers before they start gleaning.

“Terry is a treasure trove of apple lore and facts, and volunteers are fascinated by new tidbits each time he tells the story of his orchard,” Frye said. “With over 100 varieties of heirloom apples, we have a lot to learn from him.”