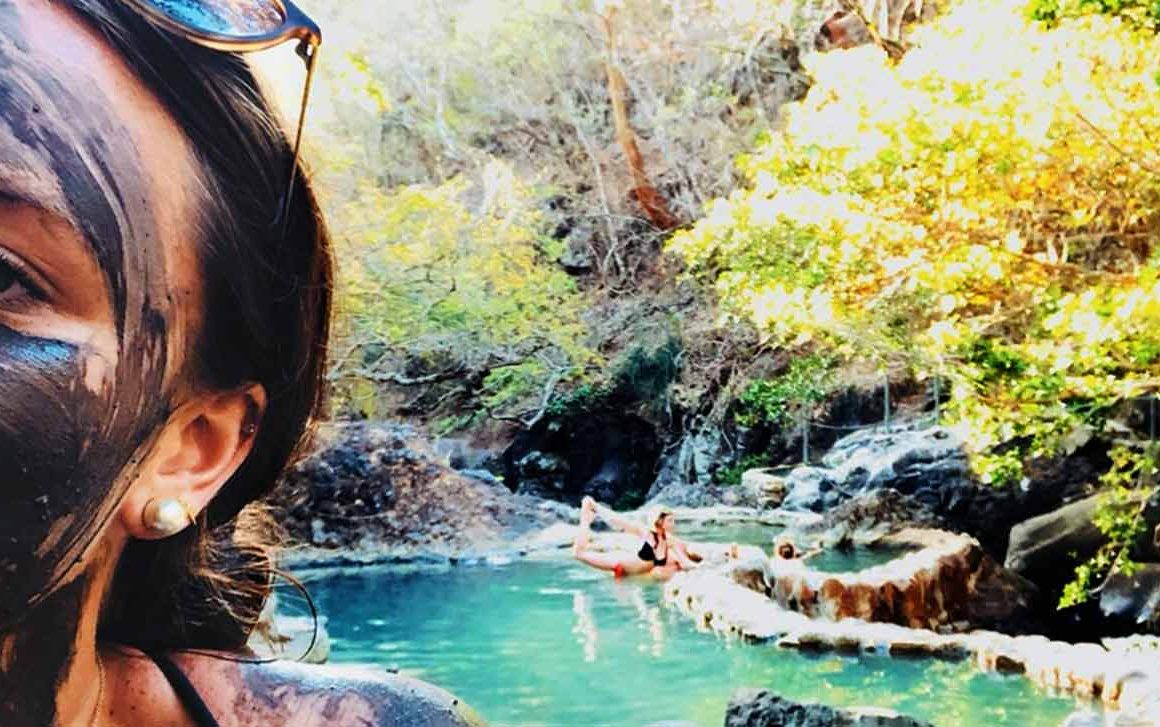 Editor’s Note: For a few years now, the Norwich Times has been featuring our young people thinking, doing, and living outside the box. Rather than follow the traditional four-years-of-high-school on to four-years-of-college route, these adventurous souls are recognizing that there are many paths, and that some may lead to a whole new world to explore. Read about Abby Dole, Maisie MacMillen, and Cleo Roback as they tell us about their exciting and humbling travels to distant lands.

Abby enjoying the sights in Paris

I began the fall of 2017 in Boulder, Colorado, working to save up for my travels, hiking, and living with my sister. After 4 months in Boulder, I went to Tamarindo, Costa Rica for three months in order to learn Spanish and surfing. There, I went to an International language school called EF (Education First) and stayed with a host family, taking Spanish lessons in the morning and surfing in the afternoons. I spent my weekends going on road trips with friends driving to different beaches and mountains around Costa Rica. While on these excursions, I came face to face with a sloth, a whale, and many monkeys, but the most exciting meeting was when Maisie MacMillen came to visit me in Tamarindo!

From there, I also travelled to Nicaragua to climb the Cerro Negro volcano and see the capital city of Managua. After my three months in Latin America, I went to Paris, France for two months, where I took French classes at the same language school (EF), staying with a host family again. While in Paris, I took a side trip and visited Frankfurt, Germany.

I returned to the USA at the end of May, and will start school at UVM in September. This year I tasted some amazing food, met incredible people, and got to do so many unforgettable things. After a big year, I’m excited to be back home in Norwich! 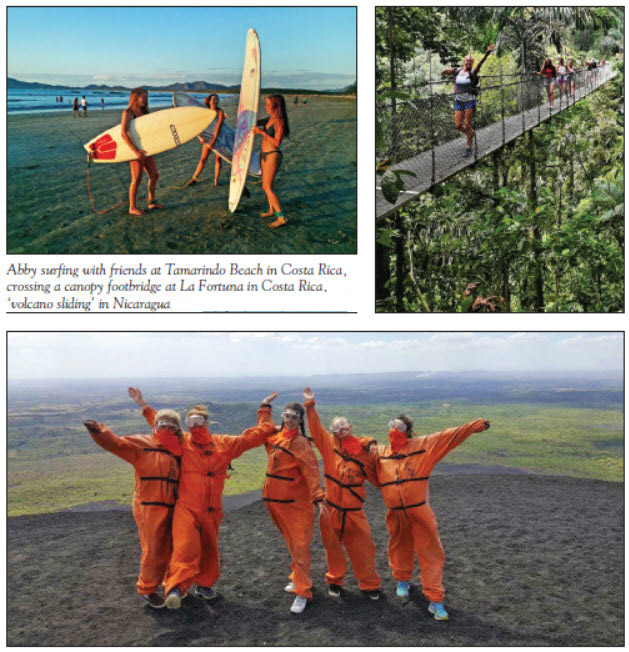 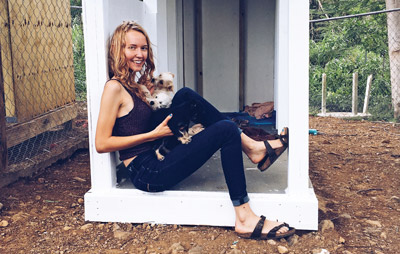 I had known I wanted to take a gap year ever since I became familiar with the term at the beginning of my high school career. And once the summer after my high school graduation started to fade away, I became more and more excited to finally make my own adventure and learn my own way.

When I first arrived in Rincón, Puerto Rico I had a mission in mind and a whole lot of excited energy. My travel partner, Liam Gurman, and I became interns for ARF, a local Puerto Rican animal rescue foundation. In our 3 months on the island we rescued, vetted and sent out over 200 dogs to their forever homes both on the island and to the states.

We also participated in three mass sterilization and vaccination clinics which is a vital step in ending the street dog problem in Puerto Rico.

We got to work alongside some amazing individuals during these projects such as Miriam Perez, the ARF president who stops at nothing to protect her morals and her animals. Dr. Cruz, the only licensed mass sterilization veterinarian on the island along with his mobile clinic able to arrive at all sides of the island for animals in need and the students and staff at the Jorge Seda Crespa Middle school where we hosted our monthly dog club. I felt so lucky to be surrounded with such an intelligent and passionate team. It made the monumental task we chose to take on that much more possible. 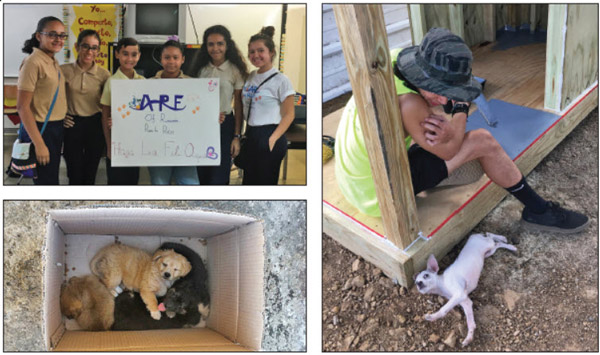 When I first set out I thought I was going to come back with a tan, hopefully a puppy (or two), and a great experience. But I gained so much more. Life lessons learned the hard way. Responsibility to myself and others, honesty, and resilience. More than anything I am now feeling more inspired, re-energized and motivated than ever to tackle my freshman year  at Hampshire College. 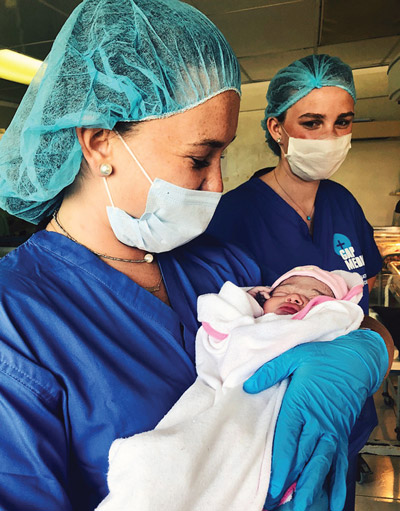 I first knew I wanted to take a gap year after I was fortunate enough to attend The Island School the fall of my junior year. I attended The Island School for a transformative 100 days and it was after I returned home that I knew traveling abroad and stepping outside my comfort zone was where I shined and grew the most. With my parents on board, I put the college process aside, something not many teenagers and parents feel is an option, and focused on how to make this next year equally as transformative.

It was hard for me to sit back and live day to day, and not plan weeks in advance. In order to make money for my travels, the first thing on the agenda was to find a summer job. I moved to Little Compton, Rhode Island to become a nanny to four kids aged 3-7. This was a good introduction to “being on my own.”

During the fall, I lived at home and continued to earn money to fund the travel I hoped to do later in the year. I researched volunteer programs of interest such as childcare, environmental work, and nursing. I decided I wanted to travel to Central America as it has a warm climate and is more affordable than some other parts of the world.

I found a national volunteer program called IVHQ that connects people with Non Government Organizations (NGOs) in the country of choice. My first assignment was at a childcare center in San José, Costa Rica. While there, I stayed with a host family who spoke little English. The center in which I volunteered was located in the second poorest village in the city. Attending the center everyday allowed these children to experience the fun, laughter, and love that they deserve.

After two weeks, I moved on to a turtle conservation project to gain experience in a broader range of volunteer work. After riding in two extremely crowded, hot buses for a total of 6 hours to the Nicoya Peninsula, I ended up in a town called Junquillal, population 400. Dirt roads, beautiful beaches, The Verdiazul turtle camp, two hotels, a corner store and a larger grocery store was about it in the town. Verdiazul is an all-volunteer organization aiming to protect endangered sea turtles. Our days consisted of doing beach cleanups, nursery tree work, hatchery work, or general maintenance on camp. At night we walked the entire stretch of Playa Junquillal (about 5 miles) in two-hour shifts. Our goal was to find turtles laying their eggs or to find current nests and collect those eggs and bring them back to the hatchery. Bringing the eggs back to the hatchery and digging a man-made nest for them increases the hatch rate tremendously. In the hatchery, they are protected from poachers, dogs, birds, the sun, and tourists. I spent 3 weeks at Verdiazul and it was here that I met other like-minded people and found a cause I care deeply about. I was able to be fully present and believe I was making a positive difference. 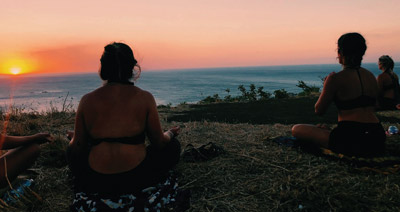 My next structured plan was to participate in a program in Santo Domingo, The Dominican Republic, for 2 weeks through a company called Gap Medics. Gap Medics creates intern opportunities in the medical field. During my time in the DR, I had the privilege of shadowing a nurse in one of the local hospitals. The hospital was very underdeveloped and vastly different than what I was used to. Each day we were in a different wing of the hospital shadowing Nurse Carla as she did procedures, took vitals and helped out in operating rooms. She always took the time to explain what she was doing and how the health care systems worked in the DR. This was an eye-opening experience and convinced me to study nursing at UVM this coming fall.

I am looking forward to doing my final gap year travels with my sister this summer, and am extremely grateful for my solo travels and for all of the people I met and the places I experienced. To all of you future high school graduates, I highly recommend taking a gap year!