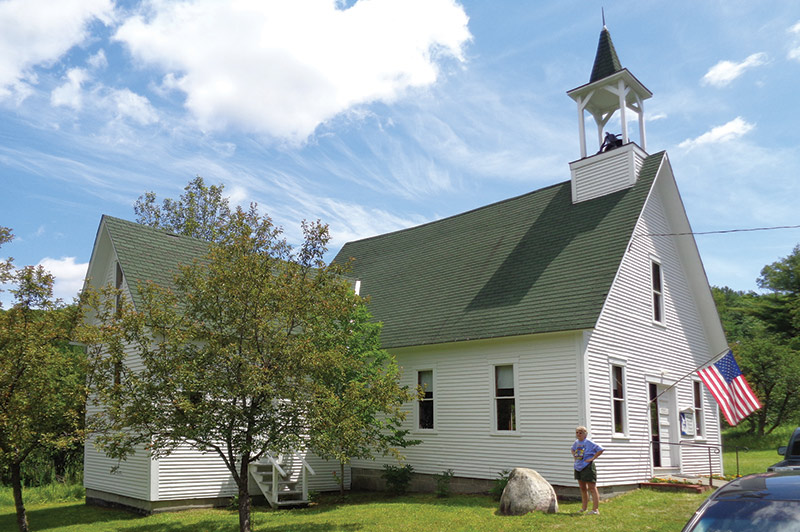 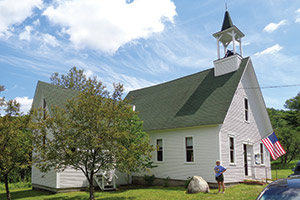 Everybody needs a friend who can lend a hand in time of need. And if you’re a building – patiently abiding and not seeming to change – it may be hard to find such a pal. Beaver Meadow Chapel, located eponymously at the intersection of Beaver Meadow Road and Chapel Hill Road in West Norwich, found its friend in the nick of time: Donna Wheeler has become the champion of the charming building and has led the drive to raise funds for a highly necessary new roof.

The roof is truly in wretched shape, with shingles missing and eroding away. The building was last roofed in 1999, says Donna, and the company that made the shingles has since been sued for substandard product. Donna and her colleagues are crossing their fingers that the few water spots they can see inside do not mean the sheathing needs replacing as well.

Beaver Meadow is the archetypal ‘normally colder hollow’ which weather forecasters mention when scattered frosts are due. The little settlement near the Norwich/Sharon town line seems unreasonably out-of-the-way, until you remember that early European settlers sometimes stayed away from the big rivers that were thoroughfares for possibly hostile Native Americans. Records tell of houses in Beaver Meadow from the late 18th century, and in 1836 a Methodist Church was built. There were 178 members. After about 50 years, the church fell into disuse, and in 1906 it burned. 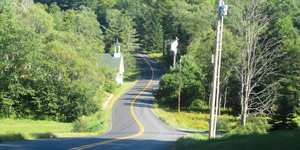 In 1915, at the urging of Margaret Kerr, a New York City schoolteacher who had retired to the village, Beaver Meadow residents built the present chapel to serve as a religious and social center. Kerr dreamed up the building project to provide a focus for her neighbors, whom she saw to be “very poor, [with] a good deal of drinking, and rough everywhere.” (Kerr’s 1938 memoir, as quoted in the NRHP application.) With $200 raised largely by local women asking for donations in nearby towns, the men set to work and built the simple-yet-pleasing building in 1915. Eighty years later it gained listing in the National Register of Historic Places (NRHP).

An enterprising minister, Rev. Allen Clark, rector of St. Thomas in Hanover from 1926 to 1931, had to get creative to deliver sermons. The NRHP narrative recounts the story of Clark’s great invention: “After completing the 11am service in Hanover, he drove some seven miles over mostly narrow country roads to the Beaver Meadow Chapel… Clark wrote that during the warm summer months, he often would preach to some twenty-to-thirty worshippers, but that winter’s deep snows and piercing winds often kept members of the congregation from attending Sunday services. While visiting the homes of his Beaver Meadow congregation, Clark says he noticed that each household received a copy of the Sears, Roebuck catalogue. If Sears managed to reach the homes of those who could not travel to one of its retail stores, he reasoned, why not try to reach the homes of his congregation by mail? Clark hit on the idea of a ministry-by-mail that some at first humorously referred to as the ‘Sears, Roebuck Religion.’” The system turned out to be a huge success. Clark prepared ‘Home Prayers’ for the next 50 years, with national distribution growing to over 800 churches. 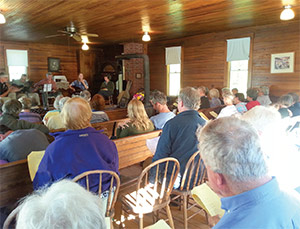 Sing-alongs are popular at the BMCwww.

Use of the chapel has varied over the years. Nowadays, there are gatherings on the third Sunday of each month; some are ecumenical services and some are sing-alongs, which can attract 75 people or so. On October 16, the chapel will host an old-time country gospel sing, “Maybelle Carter-type songs,” says Donna, “from the hills of North Carolina, from little local churches in the ‘hollers.’” This chapel seems a close cousin to such sources.

From January to March, services are generally not held in the chapel, in spite of its impressive woodstove. October features a Halloween party for local children, and the extremely popular two Christmas Eve services close out the year. Advent candles decorate the windows for an extra-long season. “If I take them down too soon, I get complaints,” laughs Donna, so the candles shine from Thanksgiving to late January. 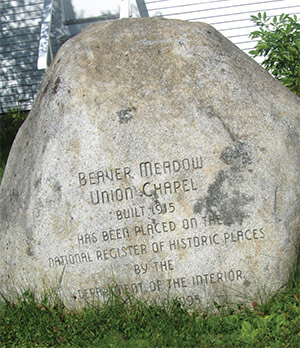 Donna says frankly, “My goal now is to get as much publicity as possible so that more people come.” Already the gatherings are popular. “It’s amazing, the number of people who come here who don’t live here,” she exclaims. “This is such a treasure – unique, I think.”

Fundraising for the roof has been advanced by several major donations. The Vermont Agency of Commerce and Community Development gives grants annually for historic preservation of barns and other buildings, and they contributed $10,000. The Jack and Dorothy Byrne Foundation contributed generously, as did the Mascoma Bank Foundation, and the Norwich Women’s Club. Donna hopes to accumulate a “little cushion” for the roofing project – there’s that worry about the sheathing – since the next project is painting the building.

The chapel lacks running water and thus has no bathroom, but this can be an advantage. “Services are short!” laughs Donna.

« Previous post
Crossing the River: The Building of the Ledyard Bridge
Next post »
Forever Feminist: Beth Dingman and Claudia Lamperti