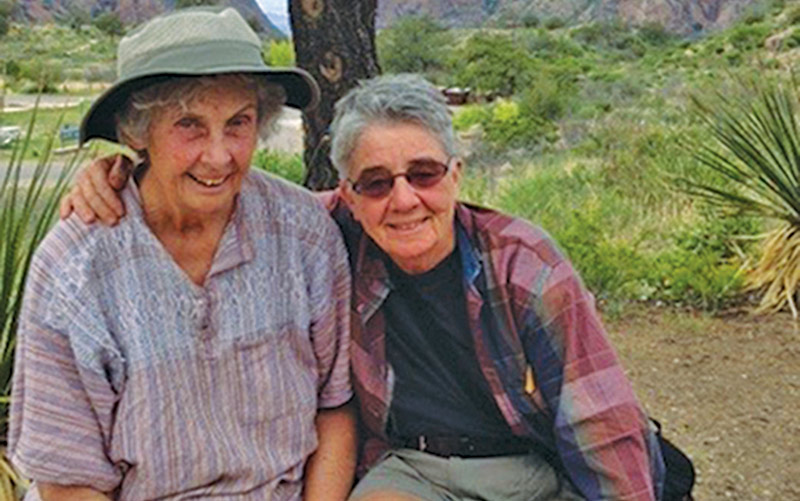 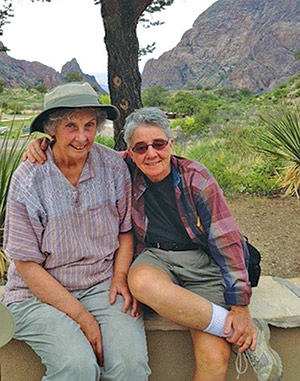 Claudia and Beth at Big Bend National Park in Texas

I think today it’s easier to have the label lesbian than feminist,” says Claudia McKay Lamperti. She and her partner, Beth Dingman, are now retired from owning and running New Victoria Printers and Publishers. Founded as a print shop in Lebanon in 1975, New Vic embodied the strong feminist political convictions of its founders, and the belief that “the power of the press belongs to those who own it.”

Claudia grew up on the west coast. She met and married John Lamperti in California, and moved to the Upper Valley in 1962 when he came to Dartmouth to teach mathematics. Two of Claudia and John’s four children live in Norwich with their families; the other two live in California.

Beth, on the other hand, grew up in Massachusetts, and went to the University of Chicago. After graduating, she spent two years in the Philippines with the Peace Corps, and seven months traveling back to the US. She then returned to Chicago for a degree in social work. Her two-year stint in California after graduate school was a time of major personal and political change for her. She returned to New England in part because it represented a sense of stability she hadn’t found in California.

Power and the Press 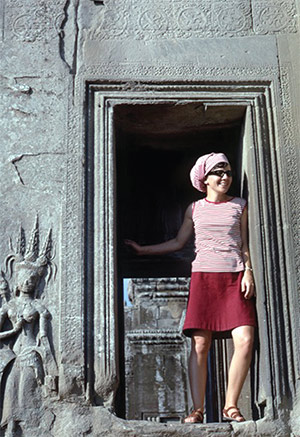 In 1975, Beth and Claudia joined with three other women to found New Victoria Printers, after several of them were fired from another local press for suing for sex discrimination over unequal pay. The name of the business honored England’s Victoria Press, founded in 1860, owned and operated entirely by women.

In the pre-desktop-publishing days of the 1970s, New Vic printers was busy with posters and newsletters, doing a lot of work for Dartmouth and other local businesses. The shop soon became a hangout for women – both straight and lesbian – as the women’s movement of those years awoke a surge of interest and awareness about gender equity. The group soon decided to publish as well as print, and started the non-profit New Victoria Publishers. Their first book was a collection of writing and art by women from northern New England entitled TILT.

In 1985, Beth and Claudia closed the print shop and moved the publishing business into their home in Norwich. They ran New Victoria Publishers with the help of Rebecca Beguin until 2007, when they retired and sold the company. During that time, they published over 100 books, primarily fiction by and about lesbians. They won three Lambda Literary Awards, among other honors. The University of Massachusetts at Amherst has recently acquired their archives and artifacts. The partners are pleased with this recognition of the historical importance of their efforts… and by the large amount of space that has opened up in their garage and living room!

Theory and Reality in Politics

Beth and Claudia tend to take a progressive yet practical view of politics. “The left wants purity,” says Beth, “and if we can’t have it, we take our toys and go home. But governing doesn’t work that way.” The pair insert remarks back and forth in the conversation, as Claudia says, “We’re happy about Hillary [being nominated],” and Beth adds, “Hillary and Bill were in the movement like us back in the seventies, but decided that the left wouldn’t take us where we wanted to go.” They are probably right, Beth admits, that to get things done it is necessary to compromise and cut deals.

Commenting on the Democratic convention and Obama’s list of behaviors “that’s not who we [Americans] are,” Beth says. “I’ve often felt that I’m not ‘who we are.’ I’ve been outside the usual set of American symbols.” In spite of this outsider feeling, she’s never felt oppressed because of her sexual orientation. Perhaps people simply reflect to her what she feels, since, as she says, “I never felt bad about myself, but I wondered, “how am I going to be this way when everyone rejects it?” 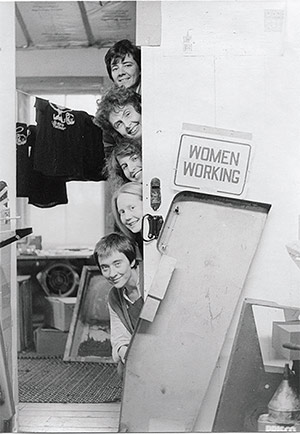 In the 1970s and ’80s, the pair were leaders in an effort to form a women’s community and also a lesbian community. New Vic Printers had always been an informal social center for feminists and lesbians, so they were used to welcoming people. A small ad in the Valley News, “Lesbians, meet your sisters” with a contact mailbox, offered gatherings to many who were lonely in the shadows. Events like games, parties, hikes, and beach trips were organized, and proved to fill a deep social need. “The connections we made, and that other women in the Upper Valley made, are still strong, even though people have moved away. People stay in touch,” says Beth.

Nowadays, the couple spends much of their time ‘grandma-ing’ (they have four grandchildren in Norwich) and traveling. They live some of the winter in Arizona. Beth is involved with the sailing club on Lake Mascoma, where she teaches women to sail.

Beth and Claudia continue to watch the world with bemusement. “Sometimes I look at The Bachelorette and think, ‘What happened to feminism that this show even exists,’” says Beth. “Every twenty or thirty years women have to relearn their feminist history. It’s something we’ve thought about – two steps forward and one step back. Progress gets made and then we forget, and there’s always some backlash, which persists. They’ve made feminist a dirty word, the way people say ‘I’m not really a feminist, but…’” Beth and Claudia are ready for the next step forward. They hope it’s a big one!