Finding Inspiration on the High Seas 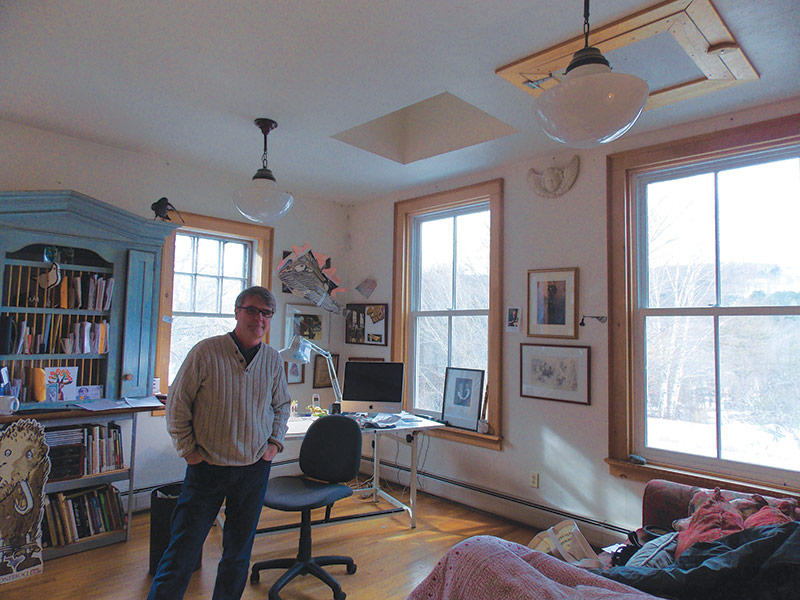 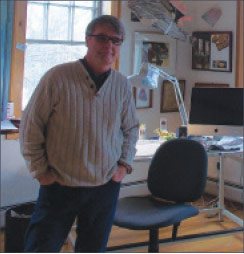 To be inside the Norwich studio of illustrator/writer David Macaulay is to be aloft in the cozy company of sketchpads, stacks of tracing paper, shelves of art and history books, 3-D models, collected birds’ nests, and one kitty named Scribbles. Awash in natural light from four large windows, the studio is attached to the home he shares with his wife, Ruthie, their two children, another cat, and three dogs. David’s son, Sander, is at home, attending Hanover High School, and daughter Julia is at UVM and “loving it.”

While Macaulay is a well-known face around town, he is also known the world over for his children’s books which feature the inner workings of machines and the human body, as well as the design and purpose of buildings, from mosques to castles.

Since winter, one wall of Macaulay’s studio has been pinned with sketches he’s made of a particular ship: the SS United States. The nearly 1000-foot long boat is not only the subject of Macaulay’s forthcoming children’s book, it is the vessel that carried him and his family from England to the United States in 1957. Readers will find the giant steamship visually dissected in classic Macaulay style, while getting a peek into Macaulay’s view as a child.

Growing up, Macaulay’s parents helped foster his imagination by example. Both mother and father enjoyed making things and understanding how they work. His father worked with textile machinery and his mother was a craftsperson. Sewing, embroidery, and cutting wood were all part of home life.

While playing in the woods was his favorite pastime, on those rainy England days he’d be indoors creating special worlds. He recalled in particular placing toy soldiers in his mother’s flower pots and creating a ski lift from spools of thread to carry them to the top of the curtain rods.

The Macaulay family moved to New Jersey in the late fifties when David’s dad was recruited to license textile machines in the U.S. While dad flew to the States to get things in order for the move, David, his mom, and two siblings, took to the sea on the SS United States, a massive ocean liner 100 feet longer than the Titanic.

To write about the ship, Macaulay is doing a lot of research, including reading books and interviewing friends with backgrounds in history. When he was afloat on the ship as a child, he admits he was “bored” and more interested in watching movies that were played for passengers than checking out the ship. Now docked in Philadelphia, the boat is owned by the SS United States Conservancy, an organization dedicated to preserving this historical boat, currently in danger of destruction. 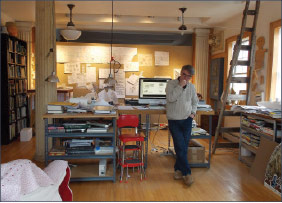 The book ends upon the Macaulay family’s arrival in the U.S., but of course David’s own journey in life was only just beginning. After several years in New Jersey, the family moved to Pawtucket, RI, and eventually Macaulay attended the Rhode Island School of Design to study architecture.

While he did do some drawing here and there in his youth, he preferred to make things. In high school his drawing was mechanical and for attention, he explained. In college, he said that he “didn’t have the courage to be an illustrator or painter. Those weren’t real jobs.”

And yet upon graduation, Macaulay felt architecture was not for him. He wanted a creative role in which he had more control. While a student at RISD, he worked for an interior designer who was very encouraging of his illustrations, and whenever an opportunity for graphic work came up – such as designing a menu cover at a local restaurant – Macaulay took it.

“I kept looking for freelance illustration work,” he said. “I began to illustrate books written by friends, and I started to see how words and pictures came together.”

Eventually Macaulay began work on what would become his first book, Cathedral. When Macaulay brought his book to an editor, the story was actually one of fantasy, merely featuring a cathedral in the background.

“The editor said, ‘we don’t need more fantasy,’ but he was drawn to the cathedral,” Macaulay explained.

And thus was born Cathedral: The Story of Its Construction, featuring intricate pen-and-ink drawings and descriptive text of all aspects of a French Gothic cathedral.

While the subjects of his books are often quite grand in scale, in his day-to-day life, he prefers the dynamics of a small town. He and his family moved to Norwich about 11 years ago.

“I enjoy walking the dogs around town at night,” where Macaulay said he enjoys passing the lit-up windows of the Norwich Inn and seeing people dining and laughing, or catching a glimpse of square dances or fencers with swords through a window at Tracy Hall.

“There are these little pockets of life throughout town. The scale is so human.”