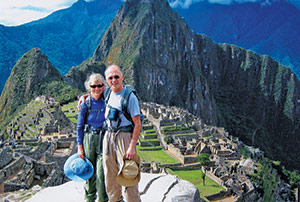 Oh, Paul and Wendy Manganiello – I’ve never heard anyone say anything bad about either of them,” says Peter Mason, a retired doctor who lives in Lebanon. Though perfectly capable of wisecracks, Peter has no reason to bring out verbal daggers for Paul and Wendy. “They’re two of the nicest people in the whole world.” More to the point, he continues, “They’re both totally committed to social justice. More than any other couple I know, they walk the talk. There’s not a hypocritical bone in his or her… in either of their…” His encomium falls apart over grammar, but his meaning is clear. Paul, a gynecological specialist, was a co-founder with Peter Mason of the Good Neighbor Health Clinic in White River. “I call him the godfather of Good Neighbor,” says Peter. “He’s passionate about the homeless, the uninsured. And Wendy [a surgical nurse] exhibits just the most caring, compassion, and confidence. She has done some wonderful things with patients with devastating illness.”

As Wendy starts to talk about choosing to be a nurse, Paul interjects, “So you could marry a doctor! That’s what your mother wanted.” She laughs and waves his teasing interruption away saying, “Don’t put that in.” More reflectively, she recalls that even in high school she was drawn to nursing because it’s “a service calling.” Her specialty is ostomy care, helping patients with (for example) colitis or Crohn’s disease, or paraplegics. She enjoys both the connections she’s formed with patients she sees regularly and the improved lives she’s helped them experience.

Paul and Wendy both grew up in New Jersey. They met in Philadelphia where she was a nursing student on duty in the ward where he, a medical student at Jefferson Medical College, was recovering from surgery for a leg injury. Though Paul is more apt to leap into the conversation than Wendy, he rejects the notion of being interviewed without her. “I couldn’t have done anything without her,” he maintains, and indeed their lives, through 41 years of marriage, are closely braided.

In the early ’70s, when Paul and Wendy met, the bond between a mouthy Italian Catholic and a restrained, self-described “WASPy Lutheran” was a stretch, says Wendy, smiling at the recollection. “It doesn’t seem so difficult now, but… He pushed me out of my comfort zone. He’s so involved with his work that I’ve become more independent. The hardest thing at the beginning was the religious difference.” “It’s been a growth process for both of us,” concurs Paul. 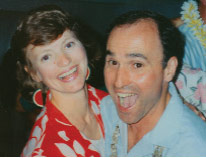 Wendy and Paul married in 1975, and two years later headed to Georgia for Paul’s fellowship in Reproductive Endocrinology. In 1979, he was recruited to Dartmouth-Hitchcock to develop an infertility program. Before then, people seeking such help went to Boston. “The woman’s age is a major factor in successful conception,” says Paul, “but even with someone under 35, in good health, it can be a year till she conceives.” It didn’t take long for the infertility clinic to become busy, even though much of the treatment was not covered by insurance. It was a time of experimentation and expanding frontiers; the world’s first birth from in vitro fertilization was in July, 1978. “Imagine being the first women to try these techniques,” says Paul – hormone treatments, surgical procedures. “It boggles the mind that women would do so much to have a child. Women are absolutely amazing.”

Parenting two children strengthened the way Paul and Wendy worked as a team. “We’d strategize by phone,” says Wendy, describing how they developed a united front. Paul notes, “It was important for us to keep things in balance: family, job, community. We tried to do [community projects] as much as possible with the kids.” When Paul and Wendy and their first child, Marc, had arrived in the Upper Valley, they felt a bit adrift, not knowing anyone. They found community in Hanover’s Our Savior Lutheran Church (OSLC). “There was a woman in church who made me realize the issue of homelessness in the Upper Valley,” says Paul. Local churches were taking turns opening their doors to those who needed a place to spend the night, with volunteers from the congregations rotating as supervisors. In conversations with general practitioner Peter Mason, Paul grew more aware of the number of uninsured people in the Upper Valley. Working with others in the medical, church, and social service communities, Peter and Paul created the Good Neighbor clinic. 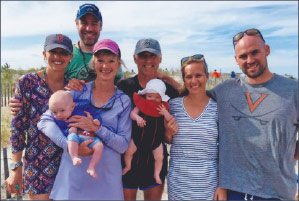 Initially, Good Neighbor provided care in the St. Paul’s parsonage on Tafts Flats in White River. “When Governor Dean came for the ribbon-cutting,” recalls Paul, “he said ‘I’m determined, I have the goal of shutting you down,’ and we said we welcomed that goal.” Twenty-five years later the region – like the nation – is still a long way from closing its charitable clinics.

While he’s happy with the community he has found in the Upper Valley and at OSLC, Paul is dismayed by punitive misreading of the Gospels. “I feel some Christians have hijacked my religion,” he says. “I go to church and I listen and read, and I wonder where did they get those ideas? Religion can be a positive force, but it can also be negative, brutal. Our faith encourages us to give unconditional love to our neighbors. At times that’s hard, but that’s what it means to be a ‘practicing Christian’ – you’re not quite there yet”

Paul is an advocate of reforming health care away from the usual fee-for-service system. He also shares the growing view that informed patients participating in health care decisions would in fact help lower costs, while also feeling greater satisfaction with their treatments. The measure of success should be an improved outcome, not how many tests or treatments were used. “Only 10 or 20 percent of ‘health’ is what the medical community provides,” he declares. “The rest are the social and behavioral determinates individuals bring to the clinical encounter. We can always do better.”