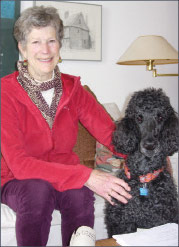 A neatly shoveled and remarkably wide path through February’s snowpack leads to the front door of the Reeves house at the top of Elm Street. The house itself, nestled into the shoulder of the hill, offers extensive vistas over the Connecticut Valley. The site is a fitting one for Sarah Reeves, whose training and interests combine inner reflection and relating to place in the world. A visitor instantly feels welcome; Sarah’s face, when not already smiling, looks as though it’s about to.

“Without really knowing it, I absorbed a sense of being rooted in the land and enjoying it” while growing up in the Nashoba Valley of Massachusetts, where her father was an apple grower. “Then you learn about land conservation, and now we’re in a crisis, threatening the viability of the earth – the fragile, beautiful earth – to sustain us and many other species. earth – to sustain us and many other species. Yet, discoveries in science – from origins of the universe to DNA – are reawakening awe and wonder, a convergence of science and faith, calling us to action.”

“There were only thirteen kids in my eighth grade at Westford,” Sarah remembers, “so my parents sent me to the Northfield School for Girls – now it’s part of Northfield Mount Hermon. The school was founded by 19th century evangelist, Dwight L. Moody. But, says Sarah, “In required Bible study, the teachers were looking for you to be thoughtful, and give reasons for a position, rather than espouse one.” Having been raised by Unitarian parents who emphasized combining reason and faith, Sarah dove right in, with a steady dialogue about the value of forgiveness, too.

At Smith College Sarah majored in religion – but almost in math. “I would ask the ‘stupid’ questions,” she says, “the elephant in the room that everyone was wondering about but thought everyone else understood.”

After college, Sarah earned a one-year fellowship for graduate study at Union Theological Seminary in Manhattan. Within two weeks she had met David Reeves, and “almost immediately knew he was the one.” The feeling was completely mutual. While David, a year ahead of Sarah, finished at Union, she went to the University in Marburg, Germany for her second year. “It was one of my dreams to go back to Germany, where I’d been for the summer when I was sixteen,” Sarah says. Before tackling theological study in German, she went to Cologne for two months of language study. “The teacher befriended me, and on vacations we’d travel together to new places. We’d decide, ‘Let’s do Baroque’ or something.” 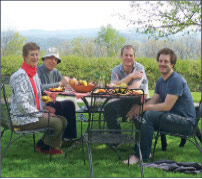 Sarah with husband Dave, and sons Ben and David

Upon Sarah’s return from Germany and Dave’s graduation from Union, they were married in Westford’s historic church. (They exited to find Sarah’s dad with a top hat and cigar on a tractor pulling a flatbed, used for apple boxes in the orchards, decorated and decked to carry the wedding party through the town.) They moved to Cambridge, where Dave started studies towards a PhD at Harvard, and Sarah, her final year towards an MDiv degree. “We moved into an apartment in Cambridge which we just loved, but my father thought it was a firetrap.”

Later they were back in Germany for David’s studies; Sarah taught English for Berlitz to earn their keep. “I had two classes in one place, for example, one for executives, who were so afraid to make a mistake, and another for some upper branch workers – foremen – and they went right at it. They learned so fast!” When Dave received a fellowship, she went to the University of Tübingen, to be better grounded in church history and the discipline of research.

Then David landed a teaching job at McCormick Theological Seminary in Chicago. Sarah worked through the Community Renewal Society as a “mission consultant” to a church on the North Side, in a parish where older German members were giving way to an influx of Hispanic parishioners. She also worked in an inner city youth job skills program.

When the couple’s first child, Rachel, was born, an error with anesthesia left her with severe cognitive and physical deficits. Sarah cared for her until she was three and a half, and then, in a heart-wrenching decision which turned out the best for all, sought residential care for their daughter. Rachel died at 20. Because of her potential expenses, Dave had been studying the stock market and investing; he fell in love with the financial markets. This became his career. He resigned from McCormick.

Sarah with her two brothers (two sisters not pictured)

The family was “looking for rootedness,” says Sarah. Her parents had retired early, moved to Vershire, and planted a new orchard, escaping sprawl in Massachusetts [see sidebar poem]. Her mother said, “You’re a country girl. Why don’t you look around here?” Visiting by herself late in 1983, Sarah found the Elm Street house. It was perfect: close to town, hilly (you can say that again!), good schools – their boys, David and Ben, were in elementary school – in the country, but “had some couth.”

Sarah worked in ministry, but then chose not to continue as a pastor because of wanting to spend time with her family. She earned a degree in landscape design and planning, focusing on native plants, and established her own business. When the Marion Cross expansion was finished there was no money for landscaping. Sarah was part of a push to raise money and involve every child in the school with the work. For ten years she worked with the Conservation Commission to inventory resources in town such as agricultural and forest land, and scenic spots; the inventories would be used for later town planning. She also served on the boards of the Upper Valley Land Trust and the Vermont Chapter of The Nature Conservancy, as well as being the President of the Association of Vermont Conservation Commissions. Now Sarah is on the Energy Committee, but claims “merely to support the awesome work of Linda Gray and the others.”

Retirement recreations include writing poetry, taking pictures, and teaching courses on faith and spirituality in the OSHER@Dartmouth program. “The fun thing about teaching is you have to learn it!” she laughs. She turns serious when she talks about what she teaches. “The Buddhists have refined the techniques of meditation so it’s accessible to people of all faiths, and secular people, too,” she says. “Some people – Bill McKibben is one – are developing a new view of creation. It’s not anthropocentric. This incredible world that we marvel at – we’re not just stewards, but a part of the creation, a part of nature. We’re not here to dominate it.”