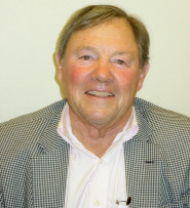 I like the day,” says Ned Redpath with his characteristic smile. “I’m up at 5. I like the people I work with – there’s a good energy in the office.” He should know: he’s shaped his business over 36-plus years in the Upper Valley, first as an independent office, then gathering a team of realtors into the Hanover franchise of the Coldwell Banker group.

Not many children would say “I want to be a realtor when I grow up,” but Ned became interested in the profession about as early as anyone. His roommate at St. Lawrence University was the son of realtors in Montclair, NJ, where Ned had lived for his last two years of high school. The two young men talked about the business a lot. After college and a tour in the military (where the luck of the draw put Ned in Germany instead of Vietnam), he went to work for the roommate’s parents. Ned enjoyed living in Montclair, which had some green space and very easy access to the entertainments of New York City, but, he says, “There was just something missing. It turns out it was the lifestyle.” 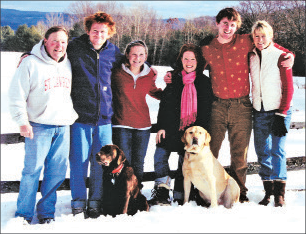 Ned had grown up with occasional visits to his grandmother’s big summer house in Nelson, NH and he was drawn to New England; perhaps it was the call of his preschool years, spent on the South Shore, in Cohasset, MA. “I woke up one day and told my wife at the time, ‘We’re going to New Hampshire,’ he recalls. “I wanted a college town, for the culture and sports, and to be involved in the community.” Before long, he had a job with Linwood Bean, owner of Webster Associates. Bean’s son Clint was also just out of the military and joining the business. Before long, they bought out Clint’s father. “I had the experience and Clint had the bloodlines,” laughs Ned. “It was much better here than in Montclair – in 1972 there was only one stoplight” in Hanover.

After about five years, Ned took a year off to be executive director of a regional professional tennis tour, a fundraiser. He would line up about 20 players for a specific tournament, paying them with seed money from a sponsoring charity. Selling lessons, exhibitions, and tickets to the tournament would recoup the seed money, and more. Sometimes Ned would play to fill out the draw, a challenge he enjoyed. “These guys were good, they weren’t on the circuit, but they were very good,” he recalls.

“Tennis has been a phenomenal door-opener most of my life,” notes Ned. When he moved to the Upper Valley, he joined the Varsity Courts Club, which rented time on the Dartmouth courts. It was a good way for him to stand out. “I guess I was OK – people said, ‘Oh my god, who is this guy?’” Ned recalls. He adds, “My hero was Chuck McKinley. He was a smaller stature guy, like me, and he played serve and volley too.” At the nearby squash courts he met Cathie DeYoe, and eventually the pair realized they were a good match. Next year they will celebrate 30 years of marriage. 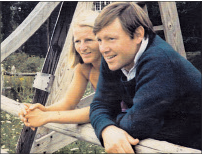 In late 1978, Ned opened his own office in Hanover on Main St. in a third floor walkup, but moved to more convenient quarters on Main Street above the old Peter Christians, then moved 10 years later to his present site on West Wheelock. Over 30 years ago he joined the Coldwell Banker franchise. National franchises give local businesspeople national reach, explains Ned: “If someone sells their house in Texas to move here, and they’re looking to buy, say they’ve had a good experience with Coldwell Banker selling their house, they’re more likely to turn to us.” Success breeds success, he finds; now over 70% of clients are repeat customers. The office sells between 400 and 500 units each year.

Though Ned himself now spends more time in administrative work, and less time listing and selling, he enjoys helping people and is willing to flex to meet the expectations of others. “You can’t just be yourself,” he says. “You have to be apolitical, a-religious. You dress up, not down. And have a clean car, no dogs!” He admits that his family’s fondness for Labrador retrievers has clashed with this stricture.

Ned is happy with the community he’s found in Norwich. “Definitely, without question, we’re dirt-road people,” he says. “We have a post-and-beam, Norwich mentality. In Montclair it was wing-tips, suits, and camel-hair coats.”

Ned is in a line of work that makes him keenly aware of development pressures, though it would be shooting the messenger to think that realtors cause growth. He recalls a trip to Tucson: “It was all parking lots and shopping malls and golf courses; the poor desert was really taking it.” Fairly recently Norwich was a small farming town, he says, but now the land “is a little bit in danger, because it’s just too valuable” unless it’s in conservation.

You might wonder if there’s a genetic component to choosing to be a realtor. Ned’s daughter Amy works with Redpath and Co. His daughter Kelsey is a realtor in Park City, UT. Maybe so, laughs Ned, “it could be, or something learned from watching. It’s personality and the ability to be a chameleon.” Wanting to help people – and being willing to help them through times of major decision and stress – are necessary traits. It’s not about architecture and design features; as Ned points out, “It’s a people-oriented business.”