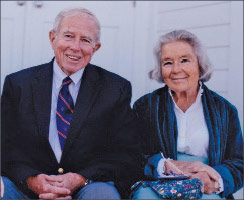 It’s hard to keep your eyes on your hosts when you visit Greg and Toni Prince’s house in Union Village, because intriguing objects and vistas draw your attention here, there, and everywhere. Inviting doorways with glimpses of trees and pastures, a gaggle of toy horses gathered in consultation on a shelf, and an antique sled perched in the corner pull your gaze and attention.

Wood paneling and antique beams warm a high-ceilinged sitting room, part of the Princes’ addition to their 1881 farmhouse. In spite of crisp winter temperatures outside, the space is as cozy and inviting as its owners. While more collections of antiques offer themselves for attention, the eye of a romantic is drawn to a needlework pillow that proclaims “Happiness is being married to your best friend.” Greg and Toni exemplify that happiness.

In their very different ways, Toni and Greg are educational leaders, Greg devoting himself to changing institutions and Toni providing a life-changing experience to children who come to her to learn to ride. Their skills feed and expand on each other. “It began with her,” says Greg, in very real – including chronological and financial – ways. “I was a sailor,” says Greg, “but I married horses.” And they put him through graduate school.

Greg and Toni met at a cocktail party in Washington DC, though neither of them were drinkers. They conversed, but Greg had an appointment elsewhere. “I have to go,” he told her, “but I have a strange question.” He invited her to be his date for a ski week in Vermont that he and a fellow Yale senior were planning. The trip had been an annual event, but for the first three years neither man had managed to find a date for the ski week; now Greg’s classmate had lined up a date, so the pressure was on! A week later Toni responded by telegram, “Twenty-one years of sense and sensibility lead me to accept your invitation.”

After graduation, Greg landed Yale’s fellowship to teach English in China for two years. “The assumption was that since you spoke English, you were qualified to teach it,” he says. Eight weeks of comparative linguistics training provided some information about possible problems from different language structures, and then he was pretty much dropped in at the deep end. “Hong Kong introduced me not just to teaching but to the importance of building institutions as a way to affect long-term change.”

Greg’s first job after China was as history teacher and Director of Guidance and College Placement at Woodberry Forest, an elite Southern prep school in Virginia. Many private academies were being founded in an effort to avoid desegregation; some at Woodberry wanted to desegregate in hope of setting a tide-turning example. Hired to help this cause, Greg occasionally roiled the waters by defending marches in Mississipppi or Freedom Rides when those actions were being condemned by others in the school. In spite of efforts by the headmaster, Greg, and others, the board did not develop sufficient backing for desegregation. The school, as an institution, missed a great chance to be a national leader. Greg was censured twice a year by the board in his three years and told, “If you were a gentleman, you would retire.”

Greg also resisted the idea of tracked classes, and told his “Basic” class they would take the AP test. When the “Basic” students protested, he told them, “You can complain, but I’m not going to bend, and I want to tell you: No matter how peeved you are, it’s nothing to what the AP class’s reaction will be when they find out I’m letting you take the exam.”  At the end of the year, every student had a 3 (out of 5) or better, and the average score of the Basic class was only one-tenth point less than the honors class. 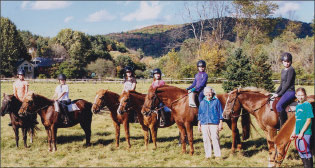 Those “Basic” students rose to meet Greg’s expectations, a pattern many passionate teachers have seen. “I experience it every day,” says Toni of her students, who come for riding lessons but leave with much more. “The kids are like little sponges. They watch the more experienced ones. They’re generous, kind, thoughtful, focused. They want to succeed.”

Greg came to teaching as an adult, but Toni was a trainer of ponies and riders by the time she was ten. “I was a very solitary child,” she says. “Working with horses was the one thing I was very good at. I wanted to be their friend, not their master, not to make them my slave. I was more interested in why they behaved a certain way.

“She was an early horse-whisperer,” Greg chimes in. To Toni, the seemingly mystic connection some call horse-whispering is a matter of paying attention with mind and spirit. Her technique works well with children as with horses, and it’s not magic, she says. “I would [teach horse-whispering] in a heartbeat if I were starting now.”

Arriving in the Upper Valley

As Dartmouth College prepared for coeducation, President Kemeny hired Greg to direct summer programs. The idea was to create a summer term of serious stature, since adding a fourth term would instantly make room for women students. “I was told to make money,” says Greg. “I was hired to be an entrepreneur.” The couple moved to Norwich and found their Union Village farm, which has been Toni’s base ever since.

“One of my proudest achievements at Dartmouth,” recalls Greg, “was some of the faculty I hired for the summer who came from places no one normally ever would have looked. When they came, they were seen to be so outstanding everyone wanted them to stay.” Michael Dorris, from Franconia College, who helped found Dartmouth’s nationally recognized Native American Studies program, was one of these. So was Bill Cook, an African American, who eventually became chair of the English department. When Greg hired Bill Cook, he simply said Bill was from Princeton, and no one ever questioned the decision. When Cook, who’d been teaching at Princeton High School, later heard that story from Greg, he exclaimed, “That explains why some of my colleagues came up to me at graduation and pointed out ‘This one’s from Harvard, that one’s from Yale.’ I couldn’t figure out why they thought I cared.”

After almost 20 years at Dartmouth, Greg became president of Hampshire College. “I was an improbable choice – white, male, Ivy-League,” he says. Student protest was a way of life at Hampshire; Greg helped them understand their actions. When NYPD chief Lee Brown came to speak, a protest was planned but didn’t materialize. Afterwards Greg called the organizers into his office to see what had happened. “We didn’t know he was black,” they explained. Greg hoped he would never again be as embarrassed by Hampshire students as he was that day – they could not have done anything that would have been more disrespectful of Brown. Later a student said, “I never dreamed I’d be at a college where the president would be excoriating me for not protesting.” 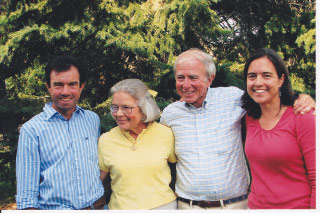 Greg and Toni with family.

Greg mortgaged his future when he recruited a woman for the Hampshire College board whose dear cause was Pathways to College, which helps disadvantaged students prep for college; for every year she gave to Hampshire, he’d serve on Pathways’ board. The program appeals to his convictions: “The fastest way to change a high school is to get the students to do it.” Part of Pathways’ mission is to help promising students network with each other and become those change agents. Those same skills are the ones they’ll need to succeed in college.

Nowadays, Greg travels for Pathways, while Toni continues to care for her six ponies, which she does without help. She gives lessons in the summer, but does not train year-round with an indoor ring. She hopes kids try different sports, or take some time off – and the ponies too. “People mostly have horses now, but ponies are more like cats,” she says affectionately. Soon the place will once again be full of children “hanging around, helping each other get it done,” she adds. “Children are incredible teachers, because they’re there, or they have been there. If you give them an opportunity, they run with it. Parents get it – this place is not competitive. The kids learn partnership, self-control, and joy.”

« Previous post
The Norwich Green: An outdoor gathering place where community happens
Next post »
Finding Inspiration on the High Seas