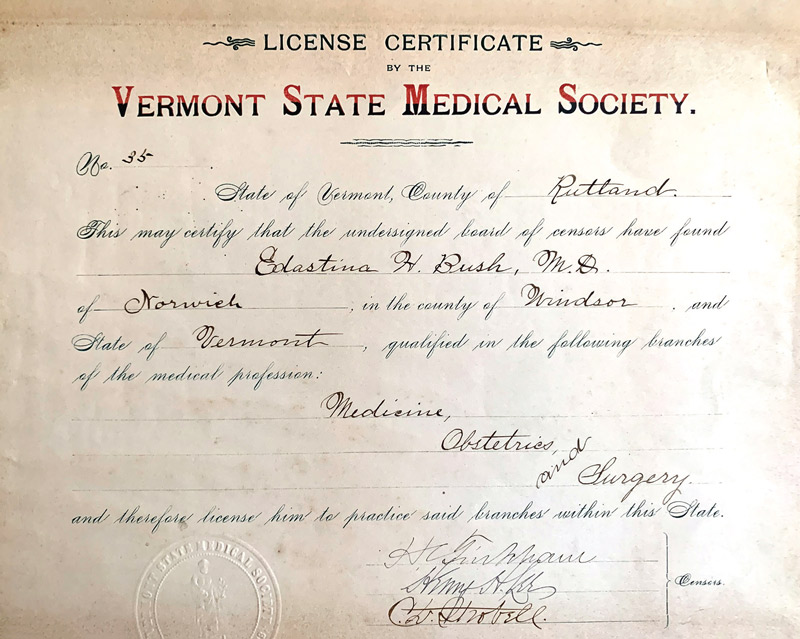 Four years ago, a group of area poets was offered the opportunity to explore the collections of the Norwich Historical Society to find inspiration for an original poem to present at an NHS event “Poets and the Past.” Phyllis B. Katz, a Norwich resident at the time, and a professor and poet at Dartmouth College, asked if there were archives about medicine. With the help of local historians, Nancy Osgood and Judy Brown, she was introduced to Norwich’s first female doctor, Edastina Bush, and guided to the Bush family archives. The poem she wrote, explained Phyllis “was triggered by things visible…in the Historical Society’s Lewis House… And inspired by things missing about Edastina that I wanted to be there but could not find.”

Edastina Bush was born on March 18, 1856, in Sharon, VT. Her father was an innkeeper and her mother stayed at home to raise Edastina, her sister, and two brothers. Fairbanks Bush, Edastina’s 95-year-old grandfather, also lived with the family. Fairbanks, known as “The Minstrel Poet of Norwich” was one of the earliest residents of Vermont to denounce slavery. He often sang his verses from memory, since many of his poems were never committed to writing. By 1870, the entire family, including Fairbanks, who lived to be 100, had moved to Norwich.

As a child, Edastina attended elementary school in Sharon. When she turned 16, she and her older sister Mary enrolled in the Norwich Classical and English Boarding School. It’s also possible that Edastina attended the Tilden Female Academy in West Lebanon. Overall, it’s clear the Bush family wanted to see their daughters have more career opportunities than most young women of the day.

Yet by 1880, 24-year-old Edastina was living with her sister Mary and Mary’s husband Edward Olds, in their home across the road from the Olds family store, which was located at the corner of Beaver Meadow Road and Main Street. Mary was soon to become the first librarian in town. As for Edastina, her occupation, according to the census that year, was “servant.”

Then in 1888, at the age of 32, Edastina Bush entered the College of Physicians and Surgeons on Boylston Street in Boston. No letters or family notes explain why Edastina headed off to medical school at this point in her life. But she may have been inspired by Elizabeth Blackwell, who in 1849 became the first woman to receive a medical degree in the U S. By 1870, there were about 550 trained female doctors in the United States. By 1900, there were more than 7,000, making up 5.5 percent of the total number of doctors in the country. The number of women listed as physicians was growing in Vermont as well. In 1870 there were only two female doctors in the state, while in 1880 there were twenty-seven. Edastina may have seen these figures and decided she wanted a career in the field of medicine.

“The College is the only regular Medical Institution in New England that admits both sexes to its privileges,” pointed out the catalog of the College of Physicians and Surgeons. “It has proven that medical co-education is a success, and, as yet, no embarrassments have arisen to prove that the presence of women in the lecture room, the laboratory, and the dissecting room, has not been productive of the very best results.”

The medical program was a rigorous three-year course where students had to pass “9 principal branches” that included classes in anatomy, obstetrics, and surgery. In addition, each student had to possess a “sufficient knowledge of Latin” and present an “original thesis in their own hand-writing.” Edastina probably lived near the campus on Boylston Street where “…good board, including room, fire, and light, can be obtained… from $4 to $7 per week.” The entire fee for the three-year course, when paid in advance, was $250.

Among Edastina’s belongings and papers in the NHS collection, the greatest number come from her medical school days, including three medical notebooks where she kept handwritten notes from each lecture she attended.

In her 1890 notebook, which contained notes on obstetrics and surgery, are several pages that dealt with medical advice and philosophy. “Drugs have their proper place in the practice of medicine,” began one page. “Some are valuable for their effect and others are valuable for the moral effect they have on the patient.” Another entry suggested “Treat the symptoms and the patient rather than the disease. Always have a definite object in view in prescribing medicine. Be accurate in giving directions to patients.”

There is also an extended list of dos and don’ts. “Answer calls promptly when possible. Don’t mix other businesses with the practice of medicine-it requires all one’s time and energies. Set apart some time every day for study. Read the current medical literature. One foreign publication like the London Times is advisable. Keep abreast of the times in all matters.”

There are even some tips on billing the patient. “Charge a reasonable price and collect it [her underline]. Do not set your prices at fifty cents, if others in your vicinity charge a dollar.”

Edastina, the only candidate from Vermont, along with seven women and thirteen men, graduated from the College of Physicians and Surgeons in the spring of 1891. Soon after her graduation, she was issued her Vermont medical license which stated that she was “qualified in the following branches of the medical profession, Medicine, Obstetrics, and Surgery.”

With her studies behind her and her license in hand, Dr. Bush was ready to practice medicine in Norwich. But it was not to be. Tragically, Edastina’s sister, Mary Olds, died suddenly in 1892, leaving her husband Edward and two children behind. Putting her new career on the back burner, Edastina moved back in with the Olds family to help raise the children, as Phyllis Katz described in her poem:

My sister dead, I was called

to keep her home, her children,

a servant in their house,

no room there for the life

But what happened to her budding medical career? Did it really end before it even began? The only mention of Edastina as a doctor comes from the 1900 census. She was 43 and still lived with her brother-in-law and two teenage children. Her occupation was listed as “housekeeper/physician.” Yet there is no town record of her practicing medicine at that time.

A Norwich physician who could have crossed paths with Edastina w as Dr. L.B. Jones. Dr. Jones practiced medicine between 1907 and 1944 and generally made house calls by horse and buggy. One has to wonder if Dr. Jones and Dr. Bush ever supported each other during a flu outbreak or when one of them was ill. But again, we have no record of them ever joining forces. There is no evidence that Edastina even set up a practice.

She put her hopes of becoming a medical trailblazer behind her. She helped raise her sister’s children and stayed in the house with her nephew, Robert Olds when his father died. She became an active member of the Norwich Congregational Church, the Norwich correspondent for the White River Junction newspaper, The Landmark, and a member of the Literary Club, which became the Norwich Women’s Club. In 1914, a paper she delivered to the Literary Club, “The Latest Events of Surgery and Medicine,” displayed a clear connection to her medical background.

In 1932, while living with her nephew in Norwich, Edastina died at the age of 76. Her medical school notebooks, graduation notices, and medical license eventually made their way to the Norwich Historical Society. When her belongings were put on display it was noted that “the Bush artifacts were preserved by Edastina and passed down through her sister’s family to the Historical Society are a testament not only of the importance with which Edastina regarded them but also the family’s esteem for her and her accomplishments.”

I saved my lecture notes from medical school, words that mattered.I could not speak or write about the

life that now was mine.

Along with her medical school documents, Edastina left behind a large scrapbook filled with carefully pressed flowers. Each flower (Wild Red Cherry, Wind Flower, Purple Trillium, and more) was labeled with her elegant, neat handwriting, the same script that filled the pages of her medical notebooks. With this image, Phyllis Katz ended her poem about Edastina Bush, the Norwich woman who endured the loss of her sister and the end of a career on the same tragic day.

Made of images, not words,

I let my book of pressed flowers

To read/hear Phyllis Katz’s poem My Book of Pressed Flowers from the Poets and the Past presentation, visit norwichhistory.org/poets-and-the-past.