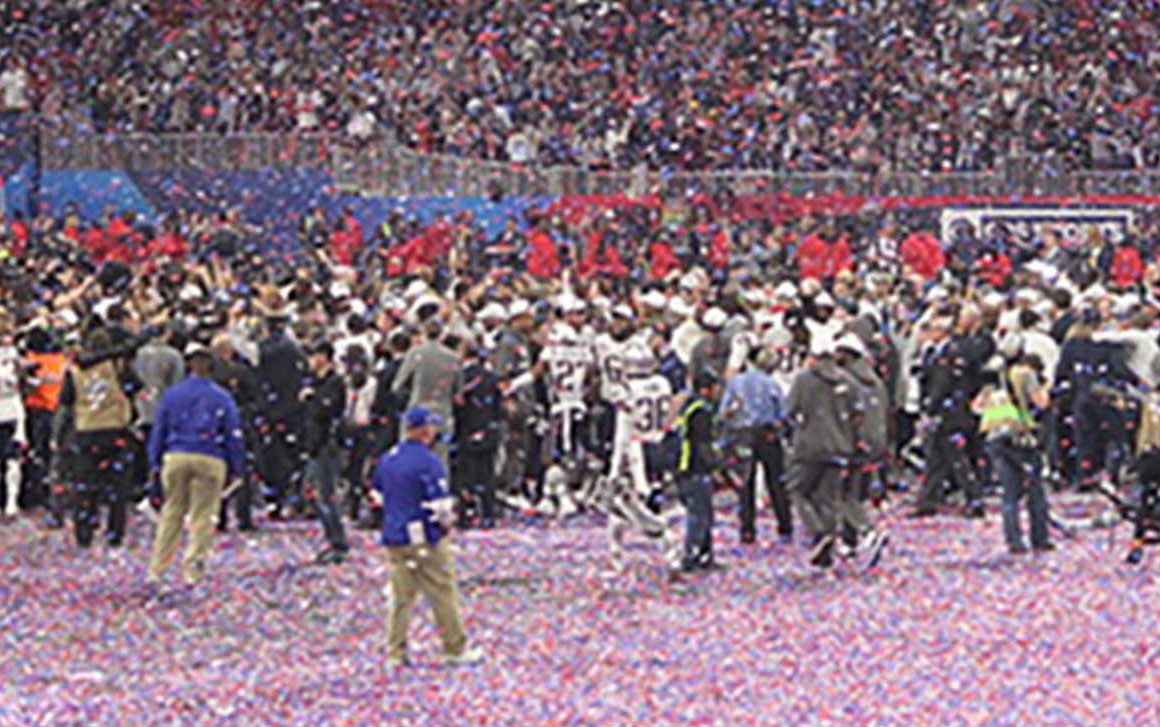 The four words we use to describe this experience to our friends are Shock, Awe, Gratitude, and Joy.” Kristin Brown and her husband, Stuart Close, have had ample opportunity to recount their once-in-a-lifetime adventure as unexpected VIP attendees at this year’s Superbowl game in Atlanta. Sitting in their living room in Norwich thinking back on their trip yet again, they both keep breaking into huge smiles. “We were just pinching ourselves that whole weekend and couldn’t  believe that it was actually happening. So far outside our normal life.” 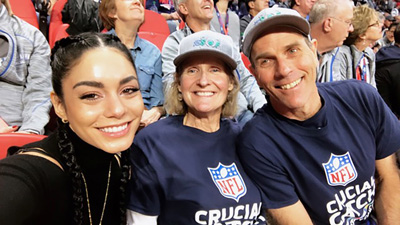 Kristin and Stuart were seated next to singer/actress Vanessa Hudgens

No mere ballgame, the Superbowl has been described as “a celebration of our shared American condition,” and, “a combination of Thanksgiving-like feasting, Fourth of July-like Americanism, and Christmas-like commercialism into a spectacle that draws the largest audience for any event in modern national life.” Even those who aren’t into football will make an exception and join friends to watch the big game in February. But for many die-hard fans, seeing the Superbowl in person is most definitely a bucket list item.

Which was part of the reason why Kristin found herself casually browsing for tickets shortly after the Patriots had punched their ticket to this year’s game. Not surprisingly, the prices were crazy, but then she happened to come across a raffle by the American Cancer Society (ACS). A contribution to their decade long “Crucial Catch” cancer awareness and prevention campaign in collaboration with the NFL entered you in a raffle for an over-the-top VIP package to Superbowl LIII. Feeling that her money would be better spent on a good cause than on expensive tickets anyway, she donated and promptly put it out of her mind. Then, less than week before kickoff in Atlanta, she received a call from the organizers. She half expected that they were just looking to hit her up for an additional donation. “What are you doing for the Superbowl?” the guy casually asked. “Oh, we’re going to hang out with our friends as we always do,” answered Kristin. “Well,” he said, “How would you like to actually go to the Superbowl this year?”

What followed was an abundance of experiences and thrills. “It was so much fun,” says Kristin, “but so opposite anything we’d otherwise ever do.” They had primarily been excited about the chance to watch the game up close, but they ended up with so much more. “I had no idea we were going to concerts,” says Stuart with a shrug. Not only concerts, but opportunities to hang out with the halftime show band, Maroon 5, and various celebrities, being escorted around to parties and VIP events, getting sidelines passes to watch the Patriots warm up, and then third row seats at the game itself (“right by the end zone where the Patriots got their touchdown,” notes Kristin gleefully). Then there were the post game parties and the NFL awards show. “We barely touched the tip of the iceberg,” says Stuart, “even though it felt like we barely slept or ate for four days.” 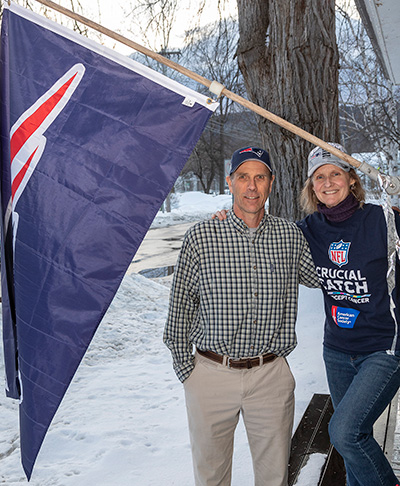 Just listening to the rundown is exhausting, but in spite of the VIP treatment, much of what they now recall as highlights from their trip were random fan encounters, like their chance to cheer on the Patriots players as the team was getting on their busses outside a hotel on the day of the game.

They loved the atmosphere permeating Atlanta. “We walked everywhere, and there was just so much excitement, so many friendly people, including the 10,000 volunteers who helped you out wherever you went.” Like Roald Dahl’s Charlie in the Chocolate Factory, they found it all awe inspiring. “The stadium itself: Oh, my god. We stayed in that stadium until midnight, when the security guards kindly told us it was time to go home,” recounts Kristin.

Approaching their big adventure with such a sense of genuine excitement and wonderment was richly rewarded; in fact, their easy going nature and appreciation for everything going on around them left even their jaded big city hosts and organizers in awe of this unassuming New England couple that came to the big show and just took it all in.

“Super Bowl LIII was not merely bad. It was a boring, lame, non-suspenseful, never-ending, drool-puddle exercise in all that can suck about professional football and the surrounding hoopla.” So read just one of many scathing reviews of this year’s big event. But perhaps it’s little more than armchair quarterbacking by unappreciative curmudgeons, because Stuart and Kristin completely disagree. “There was nothing dull about it at all,” they insist. They thought the game was riveting and the halftime show amazing.

“There will be nothing in our life ever like that again,” notes Kristin almost wistfully. “We hadn’t really been away since our kids were born. That made it all the more special.” And, to top it all off, the Patriots won. For a couple of die-hard New Englanders, it really doesn’t get much better than that. 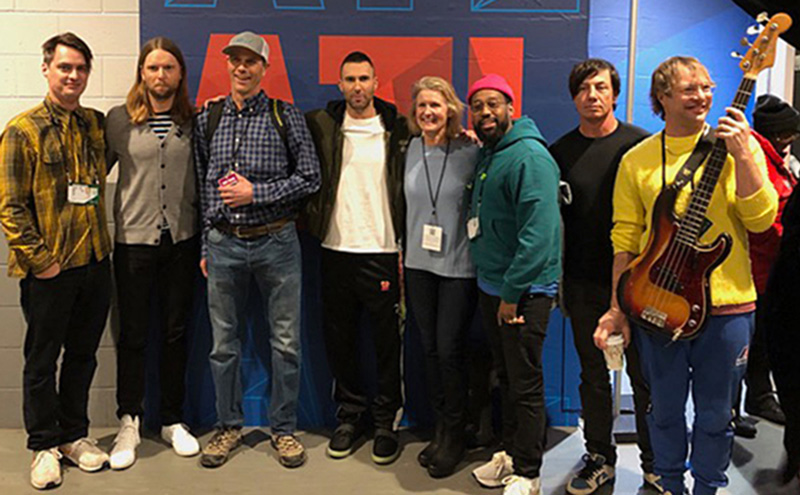 They’re left with incredible memories and a closet full of merchandise. Definitely lifelong supporters of the ACS, and still in touch with the team from Fanthropic, the company that facilitates the collaboration between the NFL and the ACS. Next year, they’ll be back to watching the game with friends in the Upper Valley. “But,” says Kristin, “we’ll be reliving our trip to Atlanta, doing it all over again in our minds.”

« Previous post
Adapt, Be Stong, Have Faith, and Live
Next post »
Vision and Tenacity Award for Opera North