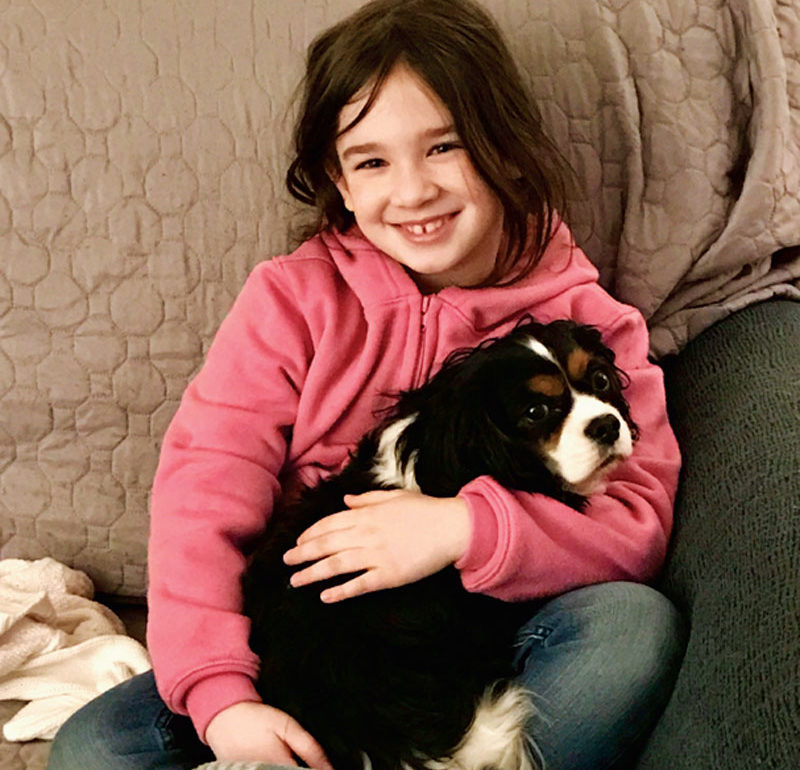 Meet Callie, a six-year-old Cavalier King Charles Spaniel who was rescued last October. We – my family and I – adopted her on October 20th and just passed the sixth-month mark. We have been so lucky to have Callie come into our lives. As my daughter said to me early on, “Mom, I feel like something just snapped into place when we got Callie; like our little family fits right, now.”

Callie came from a puppy mill. She had what I call ‘whoa’ eyes in her picture… major whoa eyes. We could see the whites of her eyes the whole way around. My wife felt a connection with Callie; she loved the puppy’s “wooly-bear eyebrows,” serious expression, and her beautiful coloring. I wish I had saved a copy of her rescue photo.

She was a breeding dog at this mill, so from the time she had her first heat until approximately seven weeks before we got her, she was either pregnant or having puppies. A puppy mill tends to be a large-scale breeding facility – although they can be smaller breeders – where female dogs churn out puppies for profit with little to no genuine care for the health and welfare of the dogs.

These dogs are left to live in kennels for their entire lives with minimal human contact. The females are bred every heat starting at 6-10 months, and their puppies are either sold locally, online, and at pet stores nationwide. There are a few things that can get a dog kicked out of the puppy mill: 1) Being too old to have puppies; 2) hitting age two without getting pregnant; and 3) not being sold as a puppy.

Those dogs, the ones deemed unfit for the mills, are either grabbed by rescues ahead of time or sold at breeder auctions where rescue organizations try to purchase as many dogs as they can possibly rehome. Lucky for us, Callie was one of those dogs grabbed ahead of the auction block by a Vermont rescue organization.

There can be unexpected differences between adopting a rescue dog and adopting what is sometimes referred to as a ‘puppy mill survivor.’ All rescues will have had different life experiences that will color their reaction to their adoptive families and new life. Usually however, rescue dogs in general are excited to meet their new people, their house, toys, and love. Puppy mill rescues tend to be very shut down when you first adopt them. They don’t understand the concept of love, playing, toys, or humans that touch them kindly.

It took Callie about two months to start reacting excitedly when our daughter arrived, about four months before she began really reacting to me, and recently until she started behaving like she is one of the family, sometimes.

She still doesn’t understand what toys are for or how to play. We’ve introduced her to a few safe dogs, and my favorite, a Lab, scares her a bit because he’s too bouncy. She can’t figure out what he is doing when he is playing with us, with the cat, or trying to play with her. He’s learned to leave her alone.

Callie is a relatively happy dog now. She still has her oddities, but every dog does. She will always have the trauma of the puppy mill behind her, but every time she goes on a new adventure, every time she gets to cuddle up with our daughter, every time Callie gets a bone, she settles in a little bit more.

We work very hard to accommodate some of Callie’s issues that we know will never go away. For instance, we know that the only time she saw a groomer was when she was rescued. That groomer had to do several of the rescue dogs that day, so she had to work quickly, she shaved her down (likely due to mats in her fur from being stuck in a cage), clipped her nails very short, and the next day the rescue organization took Callie to be spayed.

Due to this experience, we are aware that Callie is scared of going to the groomers. There would be several other dogs there waiting and stressing, it is an unfamiliar place, and I wouldn’t be there with her. Instead, we chose to hire an in-home groomer. The groomer, Dirk who owns Fresh & Furry Pet Grooming, was fantastic. He spent about 15 minutes on the floor with her first, just talking to her and letting her sniff him, his equipment, and such. 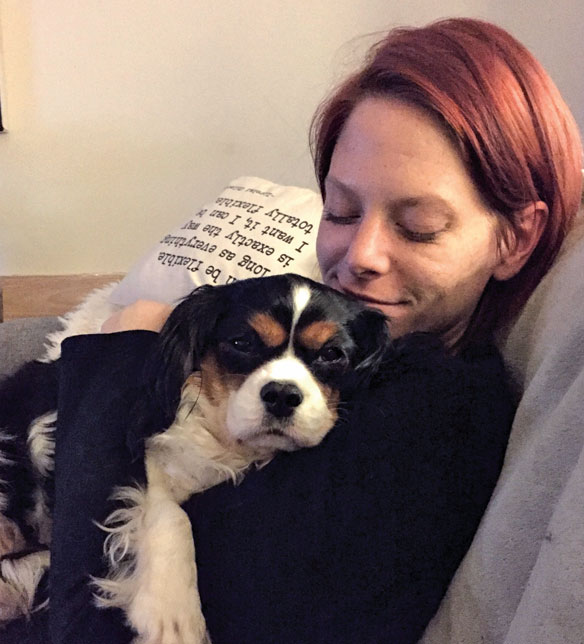 When I put her on the table, she didn’t freak out or try to get away. She sat stoically, or stood, depending on what he needed, for a long time. I never left the room, he and I chatted the whole time – either to each other or her – and she took it in stride for a while. Dirk recognized the signs when she started to get overwhelmed, and he stopped. While her grooming might not have been entirely finished, he did a fantastic job. I was impressed with my girl and with him.

I have made a concerted effort to socialize Callie as one would a puppy. She goes into the stores where she is allowed, and she meets new people all the time. Together we walk up to ‘scary’ things so she can sniff them. And we recently took an obedience class with Caron Bronstein at the S.A.V.E.S. Canine Club.

Callie still won’t let strangers reach for her to pet most of the time, even when she goes running up to greet them. They have to go for her sides, and sometimes I have to be petting her, too. But that is only true when it comes to adults. Kids are Callie’s one true love. She can be surrounded, in a way that might make another dog feel overwhelmed, and will be more comfortable than she is anywhere else.

We had thought about training Callie as a therapy dog. Now we know we have to. There is nothing she would love better than to show up in a place like the children’s cancer wing and bring smiles to the kids there.