Building Community With Bits and Bytes

Once the meeting house was the place where people would, well, meet, interact, and exchange news and information while discussing community affairs. Twenty odd years ago, along came the internet, enabling you to connect with a new, ethereal community. Remember dial-up? Your computer and landline joining forces, shrieking awkwardly in an attempt to establish a tenuous link that allowed you to exchange some brief messages with others far away? It was revolutionary and otherworldly, but slow and unreliable. And since the connection couldn’t be taken for granted, it was more novelty than productivity. It was also a blow to our sense of belonging to our traditional local community.

Since then, the internet has matured and grown exponentially. Today, (almost) everybody has access to an infinite amount of information and people online; telecommuting is routine, and teachers assign homework to complete online and “hand in” electronically. Everything from banking to shopping is done on the web, and many if not most of our daily social interactions are virtual, rather than real.

The Nuts and Bolts of Getting Us Connected

But all that digital excess is only available if your connection to the internet has kept pace. For many Vermonters, however, connectivity has remained sketchy and slow, leaving them stranded on the far side of “the digital divide” that separates those with access to new technologies from those without. To be clear, that’s not only a developed-versus-developing world issue: the digital divide has been called one of America’s leading economic and civil rights issues, and it affects rural areas, like Vermont, particularly badly.

This was why Governor Shumlin earlier this year reiterated that Vermont’s economy cannot function without sufficient internet access. “It’s no different than the telephone lines and electric lines, the challenge that Governor Aiken faced, back when that was being distributed through poles and wires,” he said of broadband. “I don’t think there’s a more important goal for a small, rural state.”

The state has struggled to achieve that goal, however, and in 2007, enterprising Vermonters took on the challenge to bring broadband to the underserved in East-Central Vermont. By 2010, after a bumpy ride through the great recession, EC Fiber had set up shop in South Royalton, and the company has since extended fiber optic cable – and with it high speed internet – to towns, libraries, companies and private subscribers in off-the-grid places, including parts of Norwich.

Getting community buy-in and gaining the necessary access to utility poles has required EC Fiber’s team to jump through countless hoops, their accomplishment is perhaps more one of financial prowess and negotiating skill than of engineering. With its community ownership and leadership, a team of friendly, local staffers and funding largely from local investors, EC Fiber certainly has more than a touch of modern day co-operative about it. With over 1,000 customers, their feisty business model is working well – so well, in fact, that EC Fiber is being noticed and their approach copied by other rural communities eager to deliver broadband, tired of waiting in vain for the state or commercial providers like Comcast to do so.

In a Norman Rockwell Painting, You’d Ask Your Neighbor

Once the high speed bytes flow freely, the first thing many users do is join the billion or so other users of Facebook, the social media juggernaut that – for better or worse – remains a primary conduit for information and interaction online. Perhaps you get back in touch with a long lost high school classmates or your old pen pal in Peru, but even if a few hundred of them are “friends,” Facebook’s vast network is no real community. As Chance Barnett of Forbes Magazine put it a few years ago, “Just because we connect with a person or company online, it doesn’t mean we have an actual relationship. Real connections are forged under many circumstances, but relationships built in local communities are more important than ever.”

Chris Healy and the Upper Valley

To bring it back down to scale, one option would be to establish a local community in the virtual world. That’s what Chris Healy of Norwich did five years ago, using Facebook’s built-in groups – “The place for small group communication and for people to share their common interests and express their opinion” according to Facebook itself. Chris had already seen the usefulness of such groups as a hockey coach, and he felt an online group could broaden the scope for instant, informal communication between people from different towns in the Upper Valley, on a platform with which they were already familiar.

Chris invited his friends, then let word of mouth (and clicks on mice) do the rest, and today the Upper Valley VT/NH Facebook group has almost six thousand members. It’s mission is for users is to: “Share your experiences, give advice, make referrals with your neighbors. Be nice to each other. Revel in our differences as well as our commonalities. Most of all, share your favorite Upper Valley finds.”

Members post almost anything, really. Live music announcements, requests for recommendations, announcements of yard sales. One member came looking for a “turtle-sitter,” another recently asked:  “Does anyone know who runs the ice cream truck that drives around Lebanon and West Lebanon in the summer time?” Less than five hours later, she had her answer.

“This group is not about selling things,” admonishes Chris in his welcome message on the group’s page. But as the moderator of the group he tries to be hands off, and he rarely has reason to intervene. “It’s somewhat self-policing,” he says. “People have really gotten the spirit of it and taken ownership.” Which may explain where Chris finds the courage to dream about expanding the group to involve more political discussions, hoping that the format would allow people to discuss local matters in a positive and meaningful way, while keeping things respectful.

Civic Participation in the Online Era

Whereas Chris Healy opted to use an existing social media network, Norwich resident, Watt Alexander, and his team at Subtext Media in White River Junction have instead built their own platform – a website called dailyUV.com – to support genuinely local, community-based conversation and connections while avoiding the privacy compromises and problems associated with sites like Facebook. 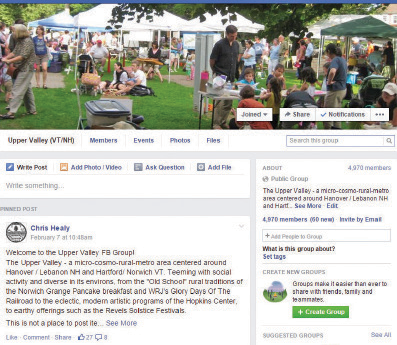 DailyUV.com began by repurposing the content from the venerable Upper Valley email listservs, but it is evolving into a comprehensive suite of events calendars, marketplaces and interactive hubs of community information.

Rob Gurwitt  (also a Norwich resident) from Subtext Media notes that, even in a small town like Norwich, life has become more complex. “We’re busier, and with few exceptions – like the recent bond debacle – people just don’t have time to show up at a community meeting at 7pm. We saw that at Town Eating Day in Norwich, where we could never get more than a couple of hundred people to turn out. All the same, people do want to be and feel connected and informed, so local government and organizations in cities and small towns all over the country are struggling to figure out how to let people know what’s going on. That’s harder than ever with the barrage of information cluttering every media channel.”

Subtext Media’s approach is to use the internet to bring it all together, lowering the barriers to access information, and presenting curated local content in a more convenient and approachable way.

In Chris Healy’s ideal world, the connections forged online should lead to offline “real world” interactions as well – face-to-face meetings and collaboration on community projects. Rob Gurwitt isn’t convinced that improved access to local information will get more people actively involved in community life. “That remains up to each individual,” he says, but he does hope that the site will help stimulate discussion.

The reason Shumlin and others want all Vermonters connected to broadband is obviously not primarily so they may swap canning recipes with their neighbors. Rather, says Julia Pulidindi of the National League of Cities, “Ultimately, the goal of broadband access is to allow people to take advantage of its potential to improve the user’s experience, whether it’s for business development, improved healthcare, education or recreation.”

The goal is proving elusive, however, and the goalposts keep shifting. The leap from dial-up to even limited broadband like DSL was significant a few years ago, but the FCC recently increased the minimum speed that may properly be considered “broadband,” and as VPR reported in February, by that new standard, thirty percent of Vermonters still lack broadband. 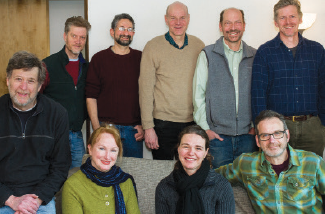 EC Fiber’s Norwich-led team of innovators has taken a grassroots approach to help community members across the digital divide. Bit by bit, they’re connecting them to the online world around which our lives increasingly revolve. Once there, they can use both the dailyUV.com and the Upper Valley Facebook group to discuss matters great and small and share the experiences and insights that make the Upper Valley special. Our little community may be part of a brave new virtual world, but it can still be local.

« Previous post
Premiering in June: Back to School Lessons from Norwich’s One-room Schoolhouses
Next post »
Evergreen Singers: Singing on the Threshold