All In the Family… for Animals 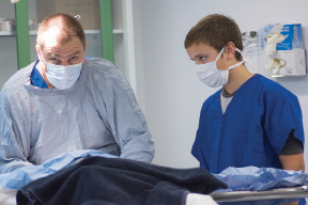 Their location may change, but their occupation is always animal health. Norwich residents, Dan and Jodi Kelly, founded the first Stonecliff Animal Clinic in Bradford, VT, in 1991. At the time, Jodi says, they had a “pretty historic” farm tucked under the cliffs north of Bradford, where they raised replacement heifers. Dan made farm calls as a large animal vet, and the Clinic began in order to care for the pets of these farmers.

The Kellys dreamed of opening an emergency hospital for animals, a service that was not then available; owners of seriously ill pets had to take them to Burlington or Concord, NH. The junction of two interstate highways seemed like a smart location. They started a satellite Stonecliff Clinic at West Lebanon Feed and Supply, since they “really clicked” with the owners there, and in 2010, they opened SAVES (Small Animal Veterinary Emergency Service) in Lebanon near the high school. (The clinic moved into that building, too.) 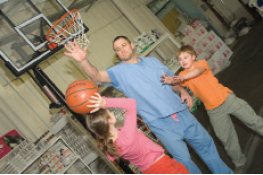 Dan, Sophie, and Elliot take a break to shoot some hoops

Success has haunted the Kellys, and as the business grew to almost 30 employees, they found themselves spending more and more time on administrative tasks, and less time with the animal care they love. It was time for another change. Last October they sold the hospital business, staying on to create a smooth transition, which is now accomplished. They have opened the Stonecliff Clinic at 227 Mechanic Street, across from Longacres. (The Bradford clinic was also sold.)

Veterinary surgery and medicine have made astounding advances in recent years. Dan mentions an x-ray they show to children on school tours, of a cat with an arrow shot into both thorax and abdomen. “You wouldn’t believe the things we’ve taken out of dogs,” he exclaims (though most dog owners certainly would). He is pleased to have the skills to heal even extreme cases, though he laments the suffering of the animals he sees.

“Another big concern in general – this is something we worry about – as animal care becomes more advanced, it also becomes more expensive,” Dan says. “We don’t want to see people priced out of caring for their pets. We make a point of working with people to figure out the level of care that will provide the best for the pet and still be workable for the owner. For us it’s never ‘Go big or go home.’” 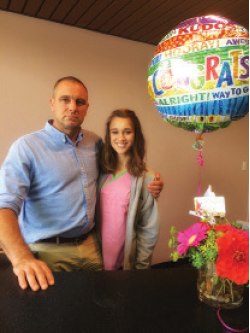 Dan has a special interest in orthopedic surgery. He’s been trained in a recently developed technique of knee repair for dogs who rupture their ACL. “We’ve created problems without realizing it,” he explains, “by breeding for certain characteristics,” and ignoring changes in conformation. He has studied wild canids, such as coyotes found as roadkills, and seen that the angle of bones making up their knees averages 10° nearer the horizontal than in domestic dogs. The domestic dogs’ steeper angle  changes the forces within  the joint resulting in torn ligaments.  “There’s a paper there,” says Dan, “but I don’t have the time.”

Animal care has always been a family affair for the Kellys, whose four children have all worked in the clinics and on farm calls as well as just spending time with animals. Jodi notes one of the benefits of this involvement: “Many of our clients have been with us for 20 or more years and have watched the kids grow up. The clinic is more like a huge family than a business.” 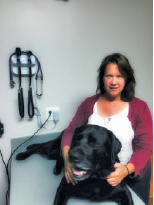 “My kids have learned so much about life working in the hospital. Lots about how to listen,” says Jodi. Their oldest daughter is now completing a master’s degree in Colorado, aiming for a career in counseling. As far as Jodi knows, none of the children intends to be a vet. “We kind of burned the bridges on that,” she admits. “They saw so much of how it takes so much time. And they have spent many hours cleaning kennels, and waiting for their parents to finish treating just one more sick patient.”

But Dan and Jodi are doing what they love: caring for animals and calming their owners. As the form of their business metamorphoses yet again, they look forward with pleasure to the future, because, says Jodi, “It’s where our heart and soul is.”