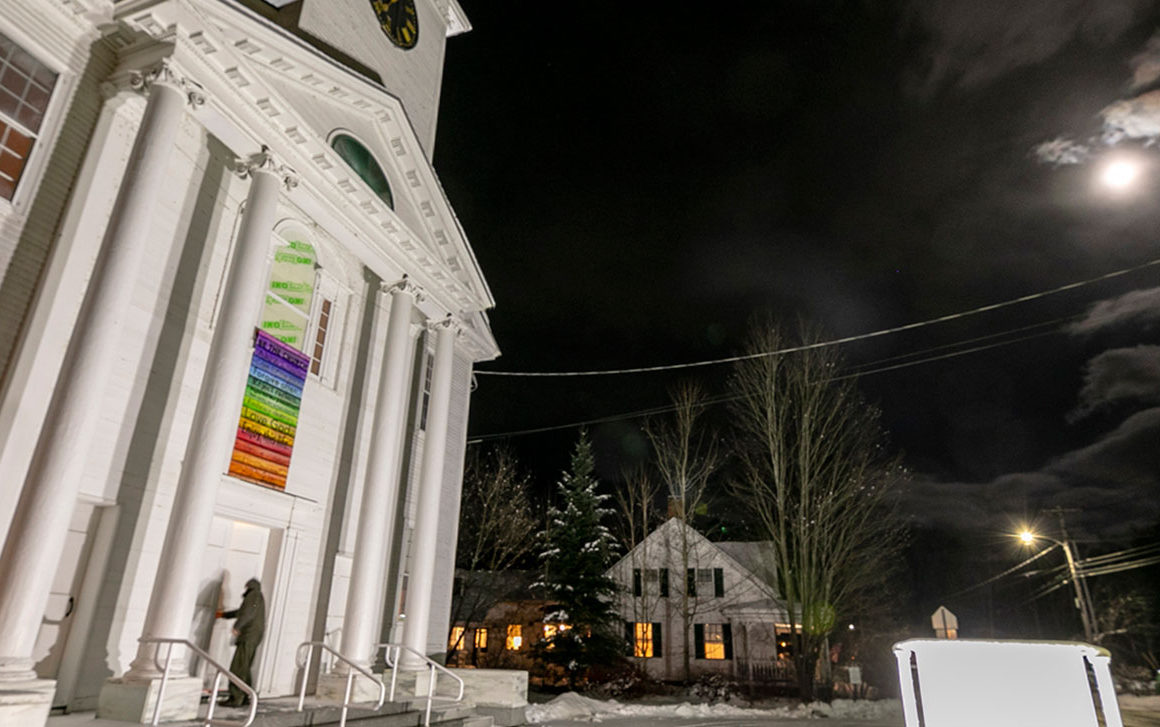 On a cold, snowy late November night, a small crowd gathered in the Congregational Church on the Norwich Green. Representing four Upper Valley congregations, they had come to attend an interfaith Thanksgiving service to express their “thanks for the blessings we share.” Bidding them welcome, Pastor Mary Brownlow remarked that the universal theme of gratitude “calls for deep thoughts and sentiments, and draws us out of our narrow concerns into a larger, spiritual realm.” Setting the theme for the service, she said, “We’re mindful of family, friends, and strangers who surround us with neighborly love. May the companionship we share satisfy each hunger for community.” 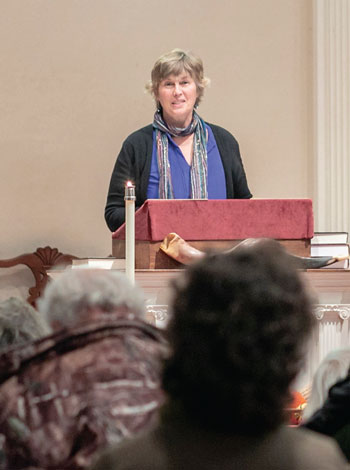 The Rev. Jan Hutslar of the Unitarian Universalist
Congregation of the Upper Valley

When Rabbi Mark Malamut of the Upper Valley Jewish Community next sounded the shofar, it was intended both as a literal call to worship, but also, as he later explained, “To wake us up to those things we want to be grateful for and that we want to work on in our lives.”

Pastor Brownlow noted Thanksgiving’s roots as a national holiday which does not belong to any one religion. Indeed, it is appreciated by many as a refreshingly secular holiday, free from the religious connections of Easter and Christmas. Based on ancient rituals of giving thanks, it evolved from the apocryphal Pilgrim feast with the Wampanoag and Governor Bradford’s proclamation of “a day of thanksgiving toward God” into a New England harvest tradition. George Washington proclaimed the first nationwide thanksgiving celebration as “a day of public thanksgiving and prayer to be observed by acknowledging with grateful hearts the many and signal favours of Almighty God.” But the official federal holiday came almost a hundred years later, after decade-long lobbying by writer and editor Sarah Josepha Hale for a patriotic celebration of autumn.

In 1863, a war-weary Abraham Lincoln concurred, proclaiming Thanksgiving Day to rally and unify a bruised nation around a common theme: a national rite of reconciliation and patriotic concord. Marveling at the progress made by the country in spite of the ongoing Civil War, he declared, “No human counsel hath devised nor hath any mortal hand worked out these great things. They are the gracious gifts of the Most High God […] It has seemed to me fit and proper that they should be solemnly, reverently, and gratefully acknowledged as with one heart and one voice by the whole American People. I do therefore invite my fellow citizens […] to set apart and observe the last Thursday of November next, as a day of Thanksgiving and Praise to our beneficent Father who dwelleth in the Heavens.” Those heavy religious undertones for a supposedly secular holiday raised the hackles of freethinkers and proponents of church-state separation over the years. 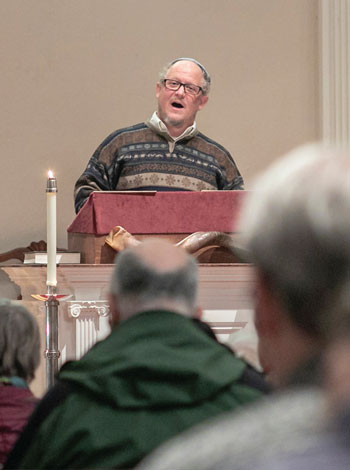 A recent Pew study of “Where Americans Find Meaning” found that spirituality and faith came fourth after family, career, and money. But those belonging to a faith will likely agree with Pastor Brownlow’s observation that “all faiths have an element of thanksgiving in them, a universal feeling of empathy and compassion, particularly toward your community, great and small.”

“What if, today, we were grateful for everything?” ~ Charlie Brown

The Thanksgiving holiday may once have been intended as a gaudy celebration of patriotism and material abundance with a religious veneer, but times have changed. “In a new Gilded Age of massive income inequality,” wrote humanities professor Leigh Eric Schmidt a few years ago, “Thanksgiving has emerged anew as a time to amplify core progressive themes – to focus on the 99 percent over the 1 percent.”

Echoing this sentiment, Pastor Brownlow characterized the interfaith service as “a grounding exercise, a chance to reflect on simpler things, come back to the roots of community, the importance of belonging.” It is, she said, “a chance to be grateful for things that just ‘are’ – not necessarily deserved.”

Indeed, the reflections at the service focused less on material abundance, and more on gratitude for the simple things that make for a good life, for people, and for community. Rector Jan Hutslar of the United Universalist read from Mary Oliver’s poem It Was Early with the poignant line: “Sometimes, I need only to stand wherever I am to be blessed.”

In offering her words of thanks for community and work, rector Jenny Anderson of St. Barnabas invoked the common prayer’s overarching theme of gratitude for “the splendor of the whole creation; for the beauty of this world, the wonder of life; and the mystery of life.” Rabbi Malamut, in turn, reflected on the value in diversity as he expressed his thanks for citizenship and freedom, imploring all to “learn to see God in all men and women, and accept humbly and gratefully the gift that each person, no matter what, brings to our American life.”

As contributions were gathered for the Haven and 19 Days of Norwich and Beyond, the choir sang Mary Chapin Carpenter’s Thanksgiving Song: “Father, mother, daughter, son, neighbor, friend and friendless; All together everyone in the gift of loving-kindness,” aptly (and probably not coincidentally) invoking a key concept of compassion and empathy found in both Judaism and Buddhism.

Peace in a Time of Discord 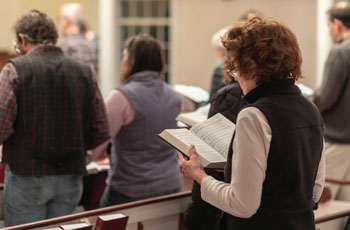 At an interfaith Thanksgiving service in Chicago, a Lutheran minister observed, “We live in a time where anger and contempt reign throughout our political stratosphere – a time when respect has taken a submissive role to vitriol.” Rabbi Malamut echoed this sentiment, sensing a need for antidotes to the collective trauma of division.

Agreeing, Pastor Brownlow said, “People need more peace and harmony in their life. With all the terrible divisions and rancor in the world, they might appreciate having just 45 minutes or so at a service like this where there’s nothing you can disagree with anyone over.”

In her bio, Reverend Hutslar’s notes that as a Unitarian Universalist she “counts on the restorative power of community.” And an interfaith service would seem to be one way for our community to come together around common themes of peace and harmony. To sing Over the River and Through the Woods together, be silent for a spell, and reflect on a shared experience. To notice and appreciate the little things, instead of the ones we can all be miserable about. And then commit to doing better. Or, as Hanover High student, Gunnar Langhus, read from Fra Giovanni in praise of words of thanks between people: “No peace lies in the future which is not hidden in this present little instant. Take peace!”