A Mind Unlimited: An Artist Finds Freedom in Creating

In Eric (Rick) Hasse’s art, you might sense longing, grief, wonder, whimsy. Most assuredly, you will see beauty. Now on exhibit at Dartmouth Hitchcock Medical Center’s Williamson Translational Research Building, 14 digital scans take you on a journey through the world of an artist whose physical movement is limited, but whose mind runs wild.

Hasse, who was diagnosed with Parkinson’s Disease in 1994 at age 35, began creating scans of found objects – from clematis flowers to aluminum foil – when his mind overflowed with “images out of his subconscious,” his wife Jane Sherwin explained.

On the day I saw Hasse at his exhibit, Sherwin did the talking, as he was in the grips of a physically bad day and had difficulty speaking. Hasse occasionally gave the “thumbs-up” sign to signal a positive response when I asked questions.

In school at Dartmouth College, Hasse studied English, finishing his degree in three years. He was drawn to poetry, but ultimately found the art too dense, Sherwin explained. Hasse studied Carl Jung as well. He has been a banker and an entrepreneur, sold real estate, served on the Norwich Fire Department and the town’s finance committee, and enjoyed fly fishing.

At the onset of his Parkinson’s diagnosis, Sherwin said, “he started to think about what was really important.” Creativity had always been part of his family of origin, and Hasse turned to it. “He started not frittering away time on economic pursuits,” Sherwin said. He revisited favorite artists, such as Matisse, Chagall, and Motherwell, for inspiration.

Ordinary household objects and flowers from the couple’s perennial garden at their Norwich home serve as instruments to express Hasse’s thoughts.

“He’s always looking,” Sherwin said. “It could be something as unromantic as a pot or a pen,” she said of what Hasse will place on their home scanner. “I can see Saran wrap and want to put it in the garbage, and he sees it as a treasure.” Using the scanner’s software, Hasse can manipulate the images. 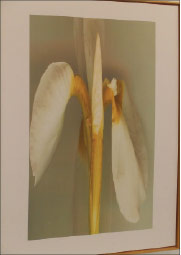 This is called “Libra Ascending: The Assumption of Karol Wojtyła.” Wojtyla is Pope John Paul II. Hasse created it after his deep brain stimulation neurosurgery.

Through his art – printed up to five feet tall and three feet wide as giclée (inkjet print) on canvas – Hasse “breaks stuff out of his subconscious. There’s a great sea of potential and you keep fishing things out,” his wife said.

Some pieces’ titles include the word “caprichos,” such as the “The B-roke Organist – from the Musicians Caprichos,” which features the pipe-like images of an organ. Sherwin described caprichos as “an attribution to another artist. It’s like a conversation with an artist who’s gone before; it’s a way to say, ‘I see what you were doing, this is my response.’”

Music itself plays a role in Hasse’s work, she said.

“A lot of them have a musicality: there’s a compositional structure, a rhythmical repetition, and a dancing form. He’s always had a great appreciation for dance.”

It was 10 years into the onset of Hasse’s diagnosis – around the age of 45 – that the disease had confined him totally. He was completely dependent on Sherwin, unable to feed or dress himself, his hands shaking wildly. In 2005, Hasse underwent deep brain stimulation neurosurgery, which stabilized his shaking and reduced his symptoms considerably.

Hasse has recently been receiving botox injections to help him keep one of his eyes open and begun a probiotic dietary regimen. He regularly sees a neurosurgeon at DHMC, with hopes of reversing his stage-four Parkinson’s.

Sherwin said Hasse was carrying wood in for the fire this past winter, and riding his bike the year before. Speaking has been challenging.

“Without spech, Parkinson’s can be a very lonely vigil,” she explained. “But his art is going off in new locations that he brings back to us.” The “locations” are not just the abstract worlds created in some of his images, but actual landscapes. “Squall Line Under a Flashing Mackerel Sky – from the Point O’Breakers Coda Caprichos,” is so clearly a landscape image – with a brownish-green sea meeting a black and gray horizon. The feeling is unsettled, troubled, foreboding.

“Landscaping can be otherworldly,” Sherwin said. “You can tell what it is, but you’re not quite sure they’re places we’ve ever been.”

In other images, you can just make out the objects Hasse scanned – a flower, a crystal, perhaps fur from Oliver, their cat – collaged with other objects to form an image that makes one pause to understand.

Sherwin pointed out, though, that there is no right or wrong interpretation of the art. The couple has enjoyed observing the reactions of hospital staff and the public as they pass by the canvases.

“He really likes to see what people think,” Sherwin said. “It’s not like he’s trying to teach you something. It’s his creativity, but it’s yours, too.”

The current exhibit was made possible in part by a grant from the Jack and Dorothy Byrne Foundation – which helped cover the cost of mounting 14 new panels – and through a stroke of luck, when Marianne Barthel found a couple of Hasse’s art pieces in storage at DHMC. Barthel, the hospital’s art director, felt the images deserved exhibition, Sherwin explained, and hung them. Around the same time, Hasse and Sherwin called the hospital seeking the art they knew was in storage. “We were going to collect them, and she had them hanging,” Sherwin said. “Rick picked out new images to print” for the exhibit. In addition to the exhibition, about 25 more of Hasse’s images are on exhibit as a slideshow in the library, the images changing every five to seven minutes.

To see more of Hasse’s work and learn more about the artist, go to www.newmedia.gallery.