A Christmas Pageant Unlike Any Other 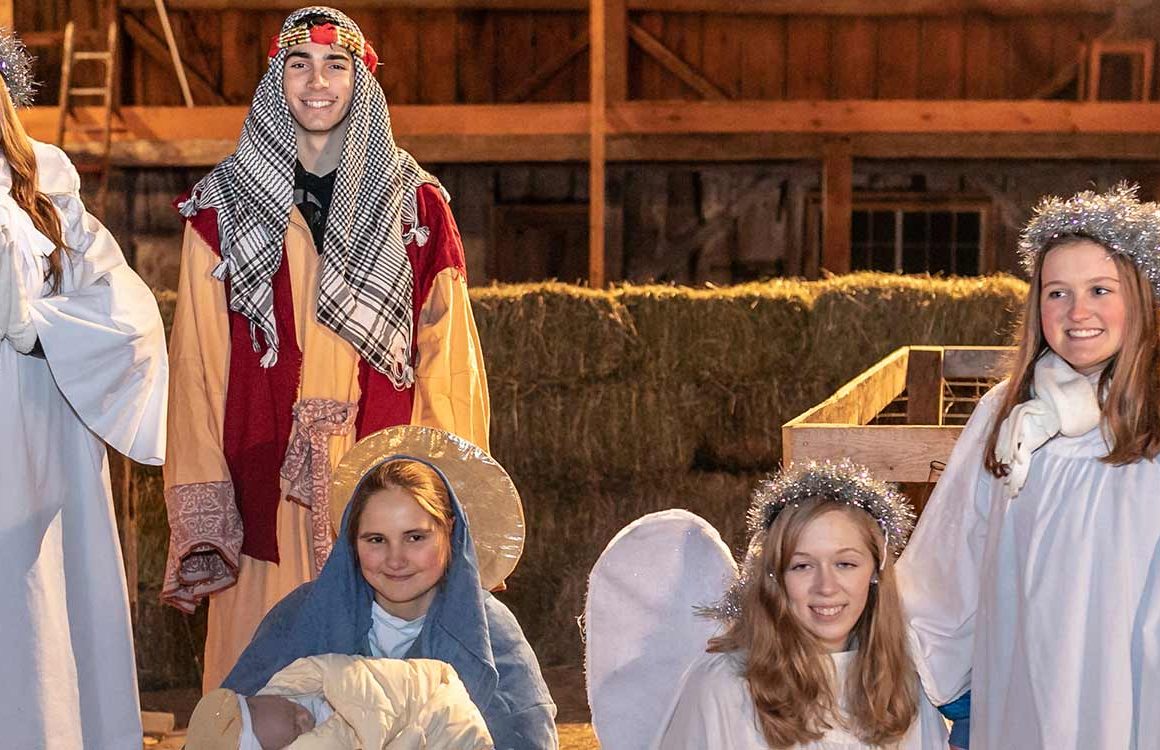 The winter of 1961 marks an important time in Norwich holiday history as the first year of a beloved community tradition – the Norwich Christmas Pageant. Before the pageant, Norwich children would often gather at the Grange to visit Santa and sit around a Christmas tree while enjoying some hot chocolate and candy. Betty Booth and several Norwich organizations and churches came up with a new idea to help celebrate such a significant holiday, and thus the Norwich Christmas Pageant was born. Now, the pageant has channeled the holiday spirit into something truly special – both a celebration of Christmas and a testament to community.

Over the years, the pageant has thrived thanks to the generous Norwich residents who give their time and skill to keep the tradition alive. As the founder of the pageant, Booth’s dedication to pulling the event off each year was vital to its success today.

One of Booth’s tasks was finding the perfect donkey to carry Mary to the stable in the story, which ended up being a white Sicilian donkey from Bethel, Vermont, whom she named Smokey. Smokey resided with Booth in her house on Elm Street which she’d lived in since 1950, where all the preparation for the pageant took place. Smokey’s ebullient personality made him the perfect fit for the important role right away, and he would often be rewarded for his good behavior during the performance with an Oreo cookie that Joseph would keep in his pocket.

While Booth was the main coordinator of the pageant for many years, she eventually passed the task on to her daughter, Laura Day Guest. Before she started managing the pageant, Guest was involved in the tradition from a young age. Along with her older sister, she had played the role of Mary, and her brothers had played Joseph. Though Guest passed away in March, the legacy she’s left on the community of Norwich and the Norwich Christmas Pageant is admired and felt by all.

Along with other volunteers who have helped keep the tradition of the pageant alive over the years, Norwich resident Ann Marie Smith has helped organize the pageant for 20 years and this year, she’s taken on Day’s role and helps oversee the whole production.

Guest was known by many as “Day,” and her friends described her as soft-spoken, calm, and humble. “Day was both shy and not religious, but she overcame her shyness and lack of religion to embrace the Christmas Pageant after her mother had died,” Day’s husband, John Guest, said. “Her heart and soul were always into it.”

Day wanted to honor her mother’s vision for the pageant and in doing so, she didn’t make any changes to how it was organized. “Day was a stalwart and protective steward of the pageant,” Smith said. “She had so many roles, but specifically always dressed Mary and Joseph, which might sound easy, but is not; she knew every fold of Mary’s blue robes and exactly how it all should be pinned together for that locally famous side saddle ride through town on what was sometimes a bucking donkey…”

Day brought the community of Norwich together in more ways than one through her work as a volunteer. Despite not being a particularly religious woman, she made everyone with different backgrounds feel included during the pageant season. “She had so many wonderful tales of the trials and tribulations of the pageant through the years,” Smith said. Day took on many responsibilities to keep the tradition going, which she kept as true to her mother’s original vision as possible. “We’d always be so glad [the pageant] came out so well and it always did,” John Guest said, who was also an involved member of the group that pulled the event together each year.

The energy in anticipation of the pageant each year was as exciting as it was stressful, but Day always made sure things ran smoothly and kept a calm composure throughout all of the planning. Her fun attitude and positive energy, and her dedication to including everyone in such a special tradition, created a cherished memory for those involved. “To me, she had a very wonderful ‘Yankee’ personality,” Smith said. “She always showed up and made sure the work was done; she was quiet but spoke up when things needed to be said or corrected; she stayed in the background and took care of the details not wanting any credit or glory, and at the end of the night, her big smile showed how thrilled and happy she was to see it come to fruition every year; she was grateful and appreciative of all who helped, and then off she went till the next year when the time to plan came around again.”

What makes Norwich’s pageant so unique is its presentation of a traditional story in a slightly less traditional way. As many witness each December, Norwich’s version of the pageant involves a live nativity “parade” – made up of pageant characters and audience members – that travels from scene to scene at several locations throughout Town. From the opening act in Tracy Hall to the Norwich Inn, and finally the Grange, the pageant is a magical spectacle.

High school seniors play the roles of Joseph and Mary in the story, while others from a range of age groups play the part of angels, shepherds, wise men, a narrator, a Roman citizen, and the innkeeper. Local livestock fill in to play the nativity animals, including sheep, oxen, and donkeys. The script for the pageant was written by Nick Jacobson, a playwright who lived in Norwich and also assisted Booth with directing the production.

In the early years of the pageant, baby Jesus was played by a doll, but later a real baby was used – either a boy or girl – to make the production even more authentic. The storyline is just one aspect of the pageant’s production. Audio equipment, costumes, and willing volunteers within the community all help to make it a reality. Microphones are provided by a Norwich resident, and robes for costumes are sourced from old graduation gowns or fabrics from the Middle East.

Not only does the Christmas pageant celebrate the holiday – it also celebrates the community of Norwich and brings everyone together to pause and feel the warmth of the season. It’s also a special opportunity for school-age children living in Norwich to reconnect with their elementary school classmates and relive childhood nostalgia.

Smith, who is currently working on organizing this year’s pageant, describes the annual event as a “beautiful, long-standing tradition that has been kept in place with the hard work of a lot of the original stewards of the pageant for many, many years,” she said. “When you grow up in Norwich as a child you watch it and get to come back as a senior and participate in it, and then you come back years later with your family. [It’s] a lovely community tradition.”